As Philippine surfing continues to gain momentum through the Philippine Surfing Championship Tour (PSCT), one elusive surf spot finally reveals itself. Flanked by fishing boats, the beach at Brgy. Sabang in Cabugao, Ilocos Sur is calm until a direct north swell bends into its coast and the once quiet town awakens with long right-handers rumbling with power. Not a lot of surfers have ventured this far north, but to those who know when to go, the place is called Kido’s Point.

Cabugao is a first class municipality in Region I, the Ilocos Region. Its eastern border is marked by the Cordillera mountain range while its western border faces the West Philippine Sea. The town of Cabugao is accessible by land transportation and is 432 kilometers north of Manila. It is closer to other famous destinations such as Laoag, which is 55 kilometers away, and the ancestral town of Vigan, which is only 27 kilometers or about half an hour away. 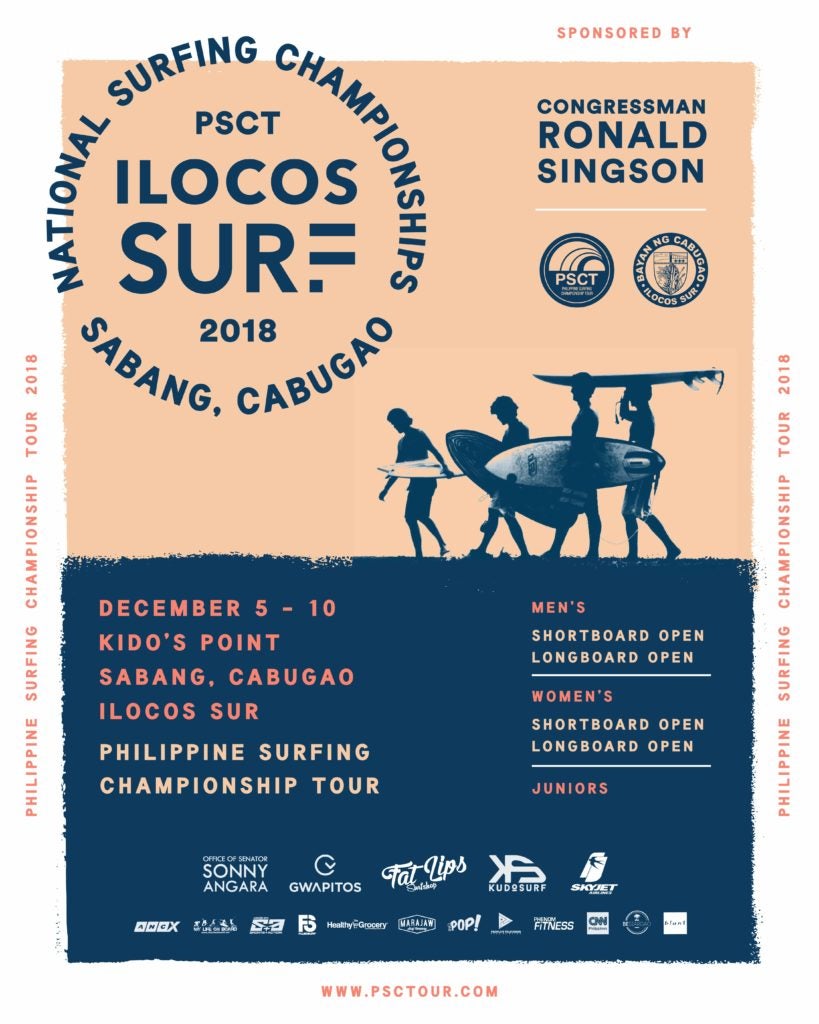 The local surf pioneer in Cabugao is a fisherman named Ronald “Kido” Cabasug, hence the name Kido’s Point. In 1993, an Australian surfer by the name of Rene Hodgens trained him to catch the powerful and consistent waves that broke off the edge of the reef in Sabang Beach. In the years that followed, a tight-knit pack of local surfers from Ilocos Sur emerged– most of whom stayed discreet and underground like their home break.

The PSCT’s third and last stop called the Ilocos SurF National Surfing Championships will be held at Kido’s Point. The rest of the nation can finally feast their eyes on world-class surf action at one of the West Philippine Sea’s most powerful surf breaks. The contest will run from December 5 to 10, 2018.

The Cabugao leg of the tour will have the following categories:

For additional information on the rules, regulations, points, and prizes, please refer to the Surfer’s Handbook found on the official PSCT website.
____

The Ilocos SurF National Surfing Championships is the third and final stop of this year’s tour. This is made possible through the support of Ilocos Sur representative, Congressman Ronald Singson, who is also a businessman, a concert producer, and more recently, an avid surfer as well.

The Philippine Surfing Championship Tour (PSCT) is the premier professional surfing competition where top surfers from all over the Philippines compete in multiple locations around the country, vying for a spot in the national surfing team. Already on its second year, the PSCT celebrates the Filipino surfers, passionate fans, and dedicated partners that together grow the Philippine surfing community to what it is today and what it’s envisioned to be.

PSCT exists to set the stage and act as a platform for professional surfing in the Philippines, promoting Filipino surfers as world-class athletes, and uniting the surfing community and fans by sharing the story, drama, and adventure of Philippine surfing one tour at a time.