The film ends with a line that resonates in familiarity. BuyBust is Erik Matti’s carefully composed commentary on the Philippine’s War on Drugs. It is a spectacle leading the senses to an exhilarating and exhausting overdrive through the film’s cinematic design. Without a doubt, it is a win for the technical aspect of filmmaking in the Philippines: the set with its lighting becomes an amplified version of reality, the sound design triggers the right response, and the stunts are framed beautifully. Still, a careful machination of visual storytelling cannot douse the problems that come with the film. BuyBust is a visual feast, but once digested, you will start to ask why it doesn’t sit quite well in your stomach. 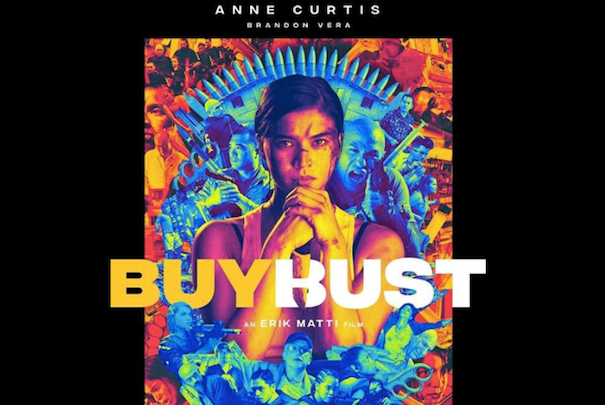 Other than being Matti’s commentary, the film is also an interrogation. BuyBust opens with an interrogation scene involving two cops and an unwilling informant. The film’s two-hour run is an attempt to answer the question, “Where is Biggie Chen?” Him being a name looming in the tense air for more than three-fourths of the film showcases the fact that Biggie Chen (Arjo Atayde) is not the sole person who should be chased out of hiding, and that the likes of him are only one of the culprits behind a system that leaves the urban poor in the middle of a seat of war.

The narrative can be said in less than the film’s entire duration, but the non-stop catastrophic showdown could be Matti’s means of translating the long night experienced by the characters to the audience who are watching. The grueling attempt to escape from the maze that is Gracia ni Maria leads the audience to the various corners of the slum that reeks of death, lust, and violence. The slum might as well be the country. And everyone’s survival, still uncertain at this point, is only through bullets and brawns.

The cast is perfect. With no character background in which the audience can cling on to, the PDEA team led by Victor Neri (Bernie Lacson) makes the audience empathize through the team’s bond, propelling a rousing death scene for every character. Anne Curtis (Nani Manigan) is a revelation in this genre. Brandon Vera (Rico Yatco) is charming in action. Allex Calleja (Teban) is, unsurprisingly, a crowd favorite.

The film communicates its meaning more effectively through the action sequence than the dialogue. Its success in dramatizing the narrative makes some of the dialogue a tad overboard by telling what the audience must have already deduced. Its high moments lie in the silence of breathlessness and terror.

However, the film fails to offer a new insight to the issue. It is merely a visual parallel to today’s more fearless news articles. The film can be viewed as the urban poor’s retaliation towards the War on Drugs, but their soulless representation, almost zombie-like, reduces each person into another body to add to the body count.

BuyBust concludes the same way a disaster concludes in the present time: an utterance of “Yung suspect, nanlaban.” In this film, a finger is pointed towards a sole name, but in the end, the gun is not.