Every election, the nation strictly observes the implementation of the Batas Pambansa 811 or the Omnibus Election Code, which lists certain prohibitions on the day prior to and on the actual election day. Those who will be found guilty of any offense under the said code may face imprisonment of “not less than one year but not more than six years and shall not be subject to probation.”

One of the prohibitions under the Omnibus Election Code is the usage or selling of any intoxicating liquor as stated below:

“Any person who sells, furnishes, offers, buys, serves or takes intoxicating liquor on the days fixed by law for the registration of voters in the polling place, or on the day before the election or on election day: Provided, That hotels and other establishments duly certified by the Ministry of Tourism as tourist oriented and habitually in the business of catering to foreign tourists may be exempted for justifiable reasons upon prior authority of the Commission: Provided, further, That foreign tourists taking intoxicating liquor in said authorized hotels or establishments are exempted from the provisions of this subparagraph.”

Last May 14, millions of Filipinos exercised their right to vote during the barangay and Sanguniang Kabataan elections. And while there is an order for liquor ban across the country, some were still caught violating the said prohibition.

Meanwhile, some may have taken the liquor ban to a stretch as even this certain non-alcoholic drink was banned for purchase. Bert Lim shared his frustrations on Facebook about a grocery store which refused to sell him a root beer on the day of election.

According to his post, Lim and his wife went to the mall after casting their votes to buy some snacks and drinks. When the person at a grocery store refused to sell them root beer and reasoned out that it’s prohibited during election period, Lim challenged the supervisor to check the alcoholic content of the beverage.

Eventually, he and his wife were able to purchase the said beverage and quench their thirst.

With thousands of people commenting on his now viral post, Lim clarified that it was never his intention to insult anyone. He just wanted to vent out his frustration on the social media platform and his friends encouraged him to share his post on public. 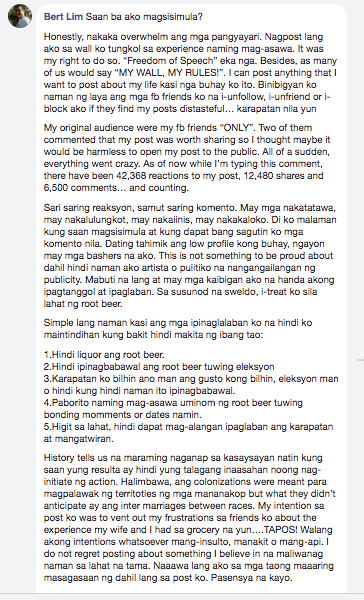 Lim also apologized to those whom his post might have offended and affected. After all, that person manning the grocery store was probably just strictly abiding the said ordinance. He/she may have just gone a little bit too far.