Paralyzed from the neck down, determined woman writes book using only her eyes

A 29-year-old woman who is paralyzed from the neck down has accomplished the incredible feat of writing a book using only her eyes.

Mia Austin from Wirral, England was only 21 years old when she suffered a stroke that left her unable to speak or move all her muscles except for the ones that control her eyes. Her doctors diagnosed her with the “locked in syndrome,” a rare condition that is often described as the closest thing there is to being buried alive.

Patients with locked in syndrome are fully awake and aware of their surroundings—their cognitive functions are not impaired and they are able to think and process information as before. There is no known cure for the condition. 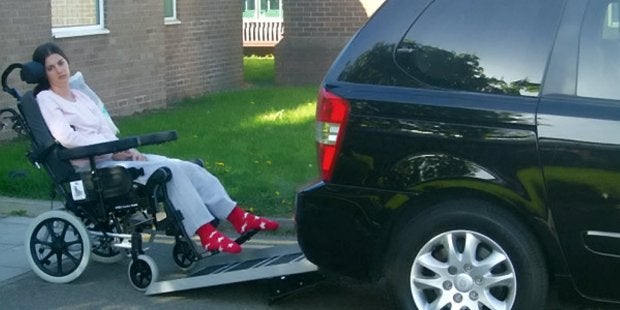 In order to communicate, Mia uses a special computer with eye-tracking and gaze interaction technology, which uses her eye movements in order to select letters and characters on the screen much like a regular computer uses a mouse. It is through this computer that Mia wrote her book entitled “In the Blink of an Eye.” The painstaking process of selecting each letter of each word of the book took her an entire year to finish.

“This is a book like no other. It is short snippets of what I can remember of my journey from the night before my accident, through to each ward I was thrown into, and finally, my coming home and getting my life back. Expect laughs, amazement, and surprises,” Mia wrote about her book. “In the Blink of an Eye” was launched last April 27, 2018.

In the book’s introduction, Mia shared what she remembers about the day she had the stroke:

“I must have woken on the morning of November 16, 2009, totally oblivious as to what was going to happen because I’d been to work, as usual, nothing different, followed by the gym where I did my normal workout. I went straight in to tell my mum how badly I’d done (at the gym) and she replied ‘There’s always tomorrow.’ How ironic.”

Writing the book is only one of the many things Mia has accomplished despite her condition. Just last month, she completed a criminal justice course at the Wirral Metropolitan College. In 2016, she was involved in various aid missions in Gambia and the Calais Jungle in France. And according to her recent Facebook posts, she is also currently working on a fundraiser in Sri Lanka and is leading a petition to allow wheelchairs on flights for the disabled.

https://www.change.org/p/allow-wheelchairs-on-flightsI'm just over halfway to my target to get this into parliament. Please sign and share!!! Lets do this!

A quick browse through Mia’s Facebook page will show anyone that she lives her life as normally as she can and does not let her condition stop her from doing what she wants. Formerly a travel agent, she continues to travel the world with her family and friends. She has gone diving with sharks in Manchester, bungee-jumping down a 300ft plunge, zip wiring at speeds of 100mph, and indoor sky-diving for charity. She also slept on the streets of Liverpool several times as part of a challenge that aimed to raise awareness about homelessness.

“I love to take part in new challenges to prove I can succeed despite my condition. I also want to support various charities because I have received help myself in the past,” Mia told The Mirror in a 2017 interview.

With the help of her carers and various forms of physical therapy, Mia has been able to regain a little control over her body.

“She can now shake her head, and there’s been some improvement in her movement,” Mia’s mother stated.

You can learn more about Mia’s inspiring journey by following her Facebook page or by buying a copy of her book here.

Books
in the blink of an eye
inspiring
locked in syndrome
mia austin
trending
viral
INQPOP! Stories we think you might also like: