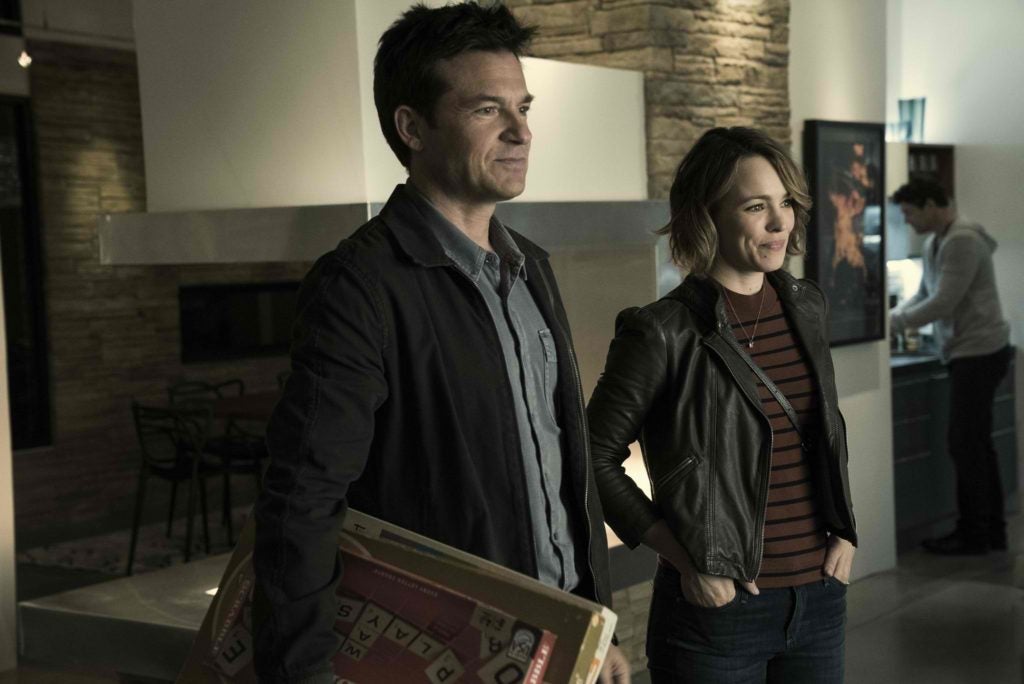 In Warner Bros. and New Line Cinema’s Game Night, an action comedy with wild adventures, Max (Jason Bateman) and his wife, Annie (Rachel McAdams), and their four friends, are all set for a murder mystery party, courtesy of Max’s brother, Brooks (Kyle Chandler).

Always looking to one-up his little bro, Brooks has promised the avid small-time gamers an epic night, far beyond their usual menu of charades, trivia and Pictionary. So, minutes later, when armed thugs break down the door and drag him away, bound and gagged, his guests are duly impressed by how realistic the fight seemed, how terrified Brooks had looked, and how menacing his assailants were. They can hardly believe it was all staged.

Maybe that’s because it wasn’t.

Or was it? Sharp, fast and unpredictable, Game Night is a full-on comedy with a fresh approach: shot like an action thriller from the first punch to the last reveal, it aims to keep audiences not only laughing…but guessing. “Some of our favorite films are ones that blend multiple genres, so that audiences go from a laugh to a gasp in a single scene,” says Jonathan Goldstein, who directed Game Night in tandem with longtime creative collaborator John Francis Daley.

“Comedy works best when you thwart expectations,” he adds. “The same is true of a good thriller. We wanted to lead viewers down a path where they think they’ve gotten ahead of us, then throw them a curve they didn’t see coming.”

As one mystery turns into another and nothing is guaranteed, Max, Annie and their friends are propelled through an insane night of dead ends and double-crosses, fight clubs and shootouts, all the while chasing and being chased, and facing danger that could be either real or imagined—or both.

Having established the three couples at the outset, “Game Night” sends them on divergent paths immediately after Brooks is hustled away to God-knows-where and lets the story follow their parallel—and occasionally intersecting—progress. Says Daley, “We wanted to capture the frenzy inherent in murder mystery parties. Each of our couples is incredibly competitive, and there’s no better way to portray that than splitting them up and intercutting their game-playing tactics. It allows us to focus on their dynamic as couples as well as their individual storylines.”

It also encourages the comedic potential of mystery and miscommunication as certain pieces of the puzzle are discovered one by one but not necessarily shared. “It’s just a matter of comedy math,” says screenwriter Mark Perez. “The more funny people you have bumbling around the city, the more potential you have for problems, speed bumps and misunderstandings. Everyone likes rooting for a team. The more characters you have on the field of play, it keeps the movie going in different and interesting directions. In this case, it’s a group of friends who care about each other enough to risk their lives for their game night partners.”

In Philippine cinemas March 14, Game Night is a New Line Cinema presentation and distributed in the Philippines by Warner Bros. Pictures, a Warner Bros. Entertainment company.