One of the things otakus love about anime is the picturesque setting it presents, aside from its heart-touching storylines and fantastic characters. Each animator illustrates different places in Japan in such a way that it looks realistic and yet, still fictitious.

Aside from the acclaimed animator Hayao Miyazaki, Makoto Shinkai’s works such as “Voices of a Distant Star,” “5 Centimeters Per Second,” and “Children Who Chase Lost Voices,” had this same effect. He’s actually been dubbed as “The New Miyazaki” in several reviews.

And one of his popular works, Kimi no Na wa (Your Name), was not only praised for its unique plot but also for its astounding visuals.

But can you imagine how Manila would look like if it’s been reimagined into one of Shinkai’s films? This 4th year AB Communication student from Adamson University did! Ralph Justin Ulep is a fan of Shinkai since 2007 and greatly admired the animator for his attention to details.

According to Ulep he started editing last July 2017 after working on some photos of his school. Then out of sheer curiosity, wondered “how Manila would look like if Makoto Shinkai made an anime here.”

And little did he know that his works will actually become viral after being shared on social media by Facebook user Remie Jordan. As of this writing, the post has 33K reactions, 21K shares, and 1.7K comments. 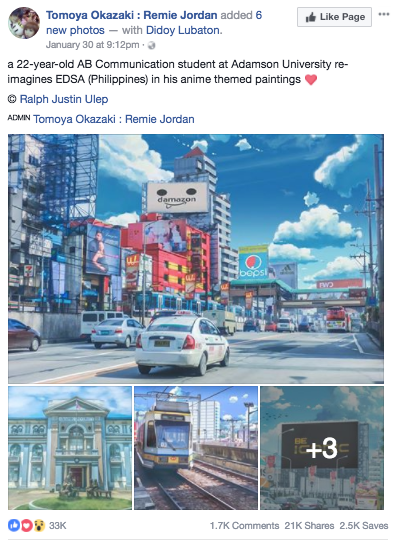 When asked about how he comes up with anime-like images, Ulep shared what he calls the “paint-over-photo” process: “I edit[ed] this in Adobe photoshop and lightroom. Basically I used real photos as a base, then I separate every object according to their distance by creating a layer. Then I will just paint them using some brushes that I made and some custom brushes that I downloaded. Add a little color overlay here and there then add a ‘screen’ layer to act as a haze filter for the art then you’re done.” And it usually takes him around 3-4 hours to edit a photo.

Right now, Ulep said that he’s working on editing areas in Binondo, Intramuros, and the Escolta District — a place that he really wants to reimagine.

You can check out his Facebook page for updates on his next works! 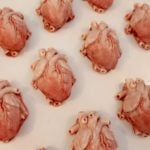 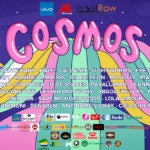 Which Planet are you in the Cosmos universe?