A message from the North Pole: All of Santa Claus’ reindeers are in fact, FEMALES

Just when you thought that nothing surprising will happen as 2017 draws to close, think again. Only six days to go before Christmas and here comes a shocking news from North Pole. It turns out all of Santa Claus’ reindeers are females.

This news originated from a tweet from @catreynoldsnyc that says: “MALE REINDEER LOSE THEIR ANTLERS IN WINTER AND FEMALES DON’T THEREFORE SANTA’S SLEIGH IS ACTUALLY PULLED BY A TEAM OF STRONG, POWERFUL, UNDERRATED WOMEN!!!!! YOU GO, GIRLS!! I SEE YOU!!!”

MALE REINDEER LOSE THEIR ANTLERS IN WINTER AND FEMALES DON'T THEREFORE SANTA'S SLEIGH IS ACTUALLY PULLED BY A TEAM OF STRONG, POWERFUL, UNDERRATED WOMEN!!!!! YOU GO, GIRLS!! I SEE YOU!!!

It instantly went viral and received different responses from people. The first thing that people pointed out was regarding the names of the reindeers. In the Christmas jingle, “Rudolph The Red Nose Reindeer,” we were introduced to Santa’s reindeers: Rudolph, Dasher, Dancer, Prancer, Vixen, Comet, Cupid, Donner, and Blitzen. Most of them have male-sounding names that’s why it’s understandable if we have also assumed that they are male reindeers. 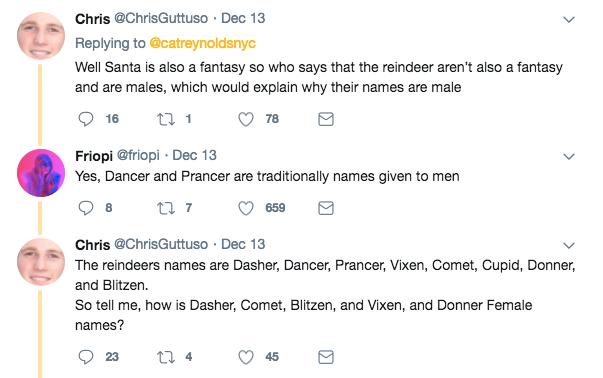 But there is a scientific explanation why these reindeers are females and it has to do with the antlers. According to wildlife biologist, Imogene Cancellare, male reindeers shed their antlers in late autumn while female reindeers retain theirs until early spring. That’s because female reindeers need the antlers for defense during pregnancy. Since Santa’s reindeers have antlers on December, they are most likely females.

The news may come as a bit of a shocker, but at least some people realized that there’s nothing to fret about because after all, it’s just fiction.

I love that some dudes are reading this and getting really upset about it and saying things like “yeah none of this is real tho” guys. come on lol

Well, I guess we just have to accept that fact our childhood was all a lie.