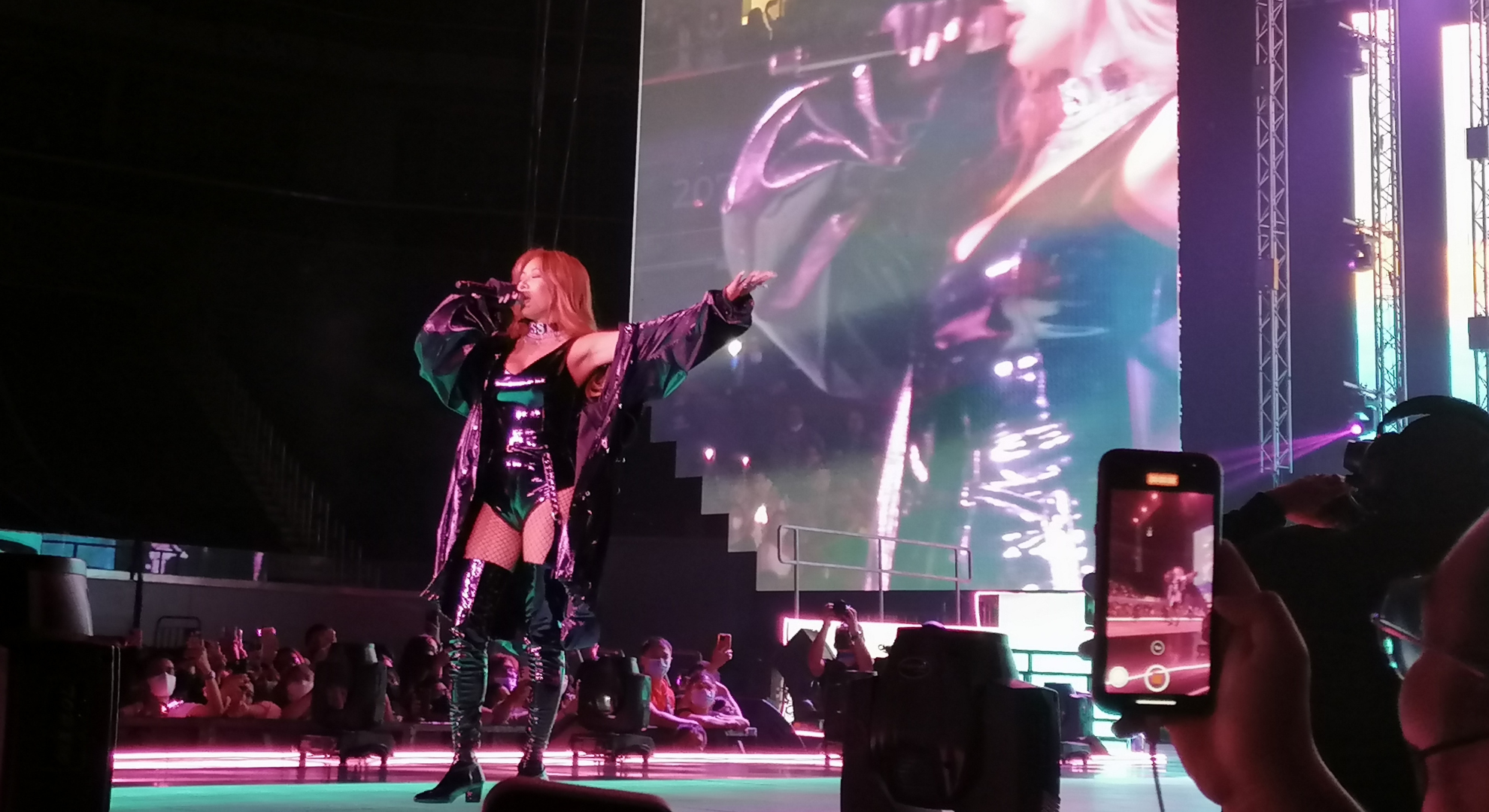 From zooming in to Jessi’s P-I-C on her social media, to seeing her live– Filipino Jebbies (Jessi’s fandom) finally got the chance to see the K-Pop idol in the flesh during her highly-anticipated Zoom in Manila concert at the Mall of Asia Arena on September 30.

On Friday night, thousands of fans gathered early, filling the arena to the brim to witness the “ZOOM” singer hit the Philippine stage for the first time. While they were preparing to sing and dance their hearts out for the rest of the night, POP! had the opportunity to catch up with Jessi an hour before her show.

LOOK: Thrilled fans of South Korean-American rapper Jessica Ho, aka Jessi, were ready to 'zoom in, zoom out' at the Mall of Asia Arena and witness her first-ever solo concert which happened earlier tonight, Sept. 30. #ZoomInManila #JessiInManila

In POP!’s exclusive interview, the South Korean-American musician admitted that she felt scared for her first-ever show. “This is my first concert in general. This is my first [time performing] to more than thousands of people, and I’m like scared, and I might throw up,” Jessi said.

Jessi then shared that she has a health condition she is going through right now and was really tired. But upon meeting some of her Filipino fans during the sound check session, she felt a glimpse of the warm energy from the night’s show. The artist said: “I got the energy [from the fans] and it got me alive, so I’m just looking forward to getting on the stage.”

With excitement also coming from Jessi’s energy, she shared that she considered “Zoom in Manila” as one of her proudest moments, to date. “I’m not even lying or anything, but I think today is one of the biggest celebrations in my life. It’s my first concert with such a big audience, and you know, I think today, I’m going to feel something.” 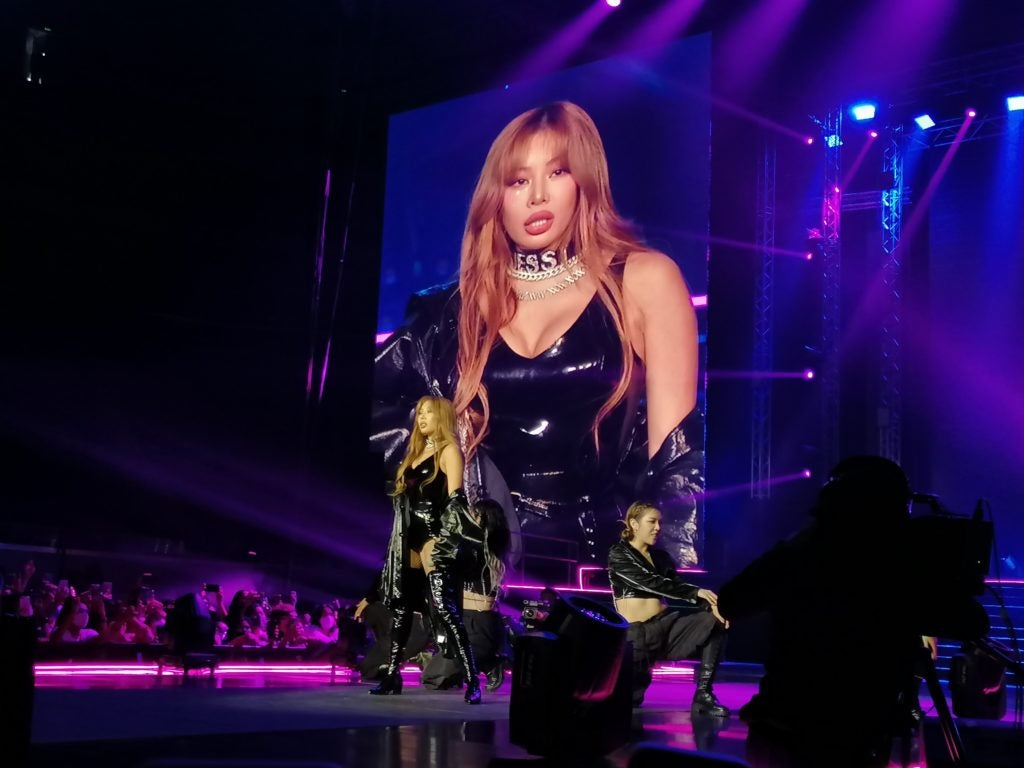 She then added that her Filipino fans would experience a “more personal show” for her “Zoom in Manila” concert. “This is Jessi’s first solo concert [so] it’s more of like a different kind of connection. [I’m] with my fans, so I can talk about what I really want to talk about,” Jessi said.

Speaking of her fans, Jessi also expressed her appreciation for their warm reception to her hit comeback single “ZOOM,” which she released earlier this year. “I [didn’t expect it] to become viral on TikTok, and I appreciate it so much. It makes me actually want to work harder,” she said. “I’m thankful for all the love and support, and for everyone who contributed to the dance challenge.”

She continued: “I didn’t think that a lot of people knew that I only made that song 2 to 3 days […] I also think that with ZOOM, the concept of the song is just a good TikTok song. I just didn’t realize it until it went viral on TikTok. So, it makes sense to use it in every photo, and nowadays, everything is about the internet and social media, so it [really] makes sense.” 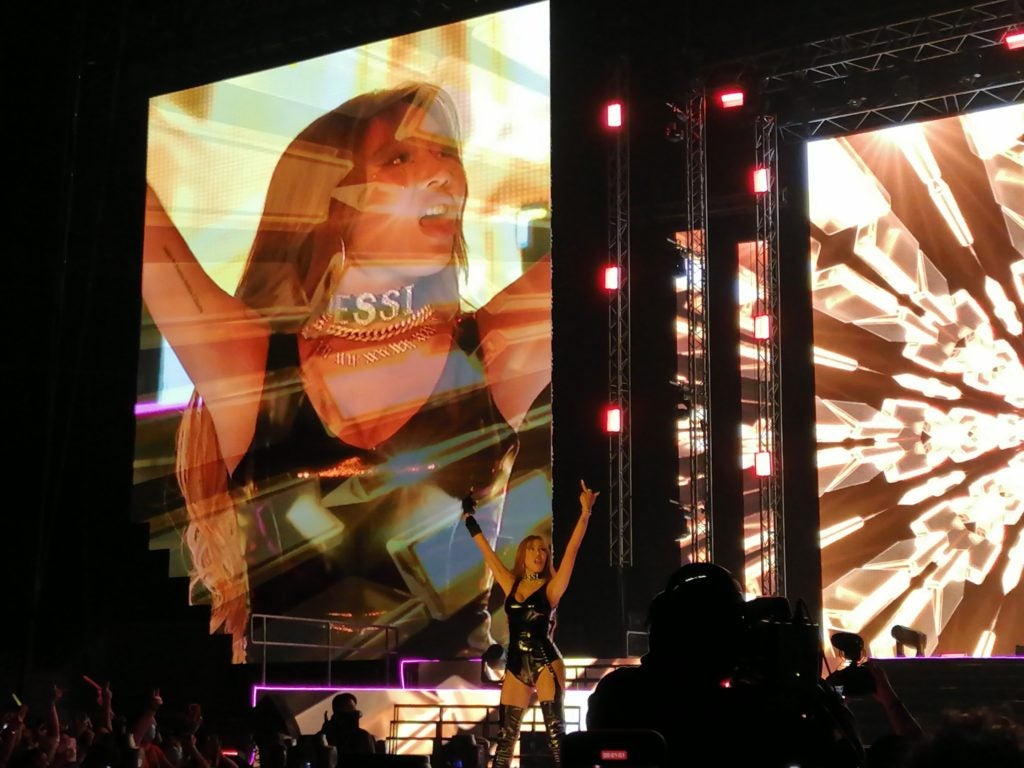 When asked about her thoughts on the changes brought by COVID-19 in the Korean music industry and her career, Jessi stated: “F*ck, COVID, first of all, okay.”

“Second of all, for me, I’m very, very grateful in a sense because I dropped many songs during those times. When COVID-19 actually hit, I dropped “NUNU NANA” and that song was the one that put me on the charts,” she recalled. “So, in a sense, I’m very grateful because after 18 years of my career, during the hardest moment of our lives, my songs did well.”

Indeed, during the onslaught of the COVID-19 pandemic, Jessi has been dropping new songs left and right. In 2020, the K-Pop idol released her second extended play “NUNA,” with her single “NUNU NANA” becoming her highest-charting solo single. Shortly after, she dropped the music video for “Numb.” 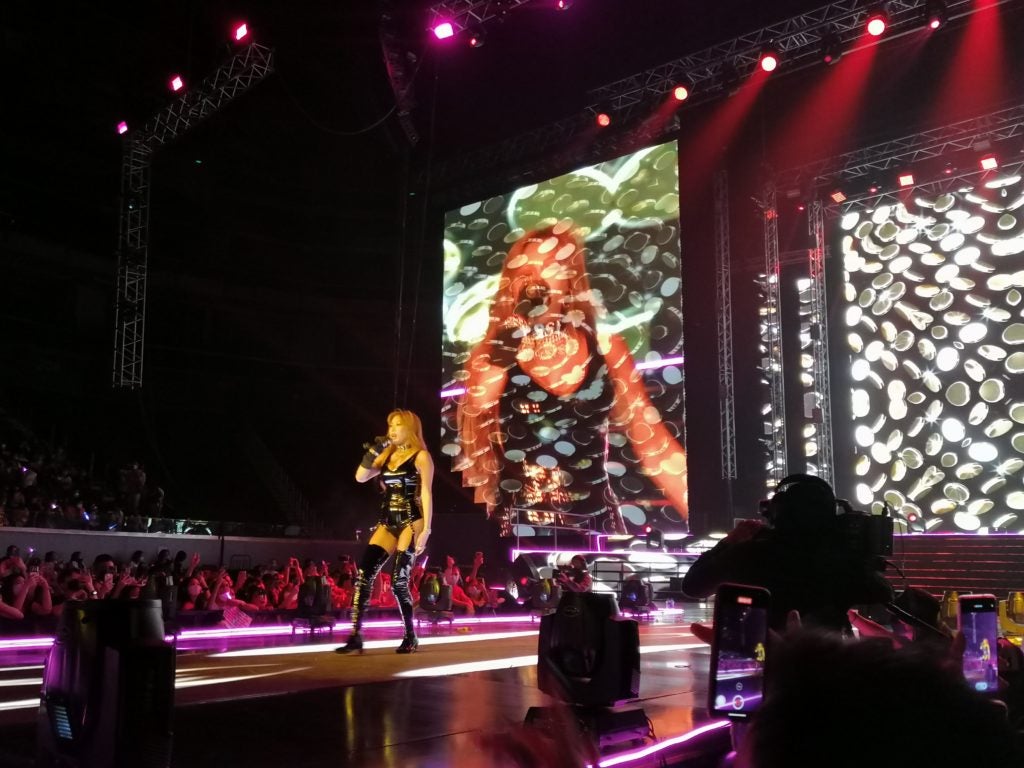 Since then, she continued to dominate the music scene with “Don’t Touch Me,” a debut single of her supergroup Refund Sisters, “What Type of X,” “Cold Blooded,” and “ZOOM.” She was also featured in Ed Sheeran’s song “Shivers” with Sunmi, and Psy’s “Ganji.”

Aside from music, Jessi has also been dabbling in hosting and appearing in television programs. She launched her variety show, Jessi’s Shorterview, in 2020, appeared in MBC’s Hangout with Yoo with Refund Sisters, and on tvN’s Sixth Sense.

“I don’t like COVID, but I’m grateful and glad in that sense,” Jessi said. 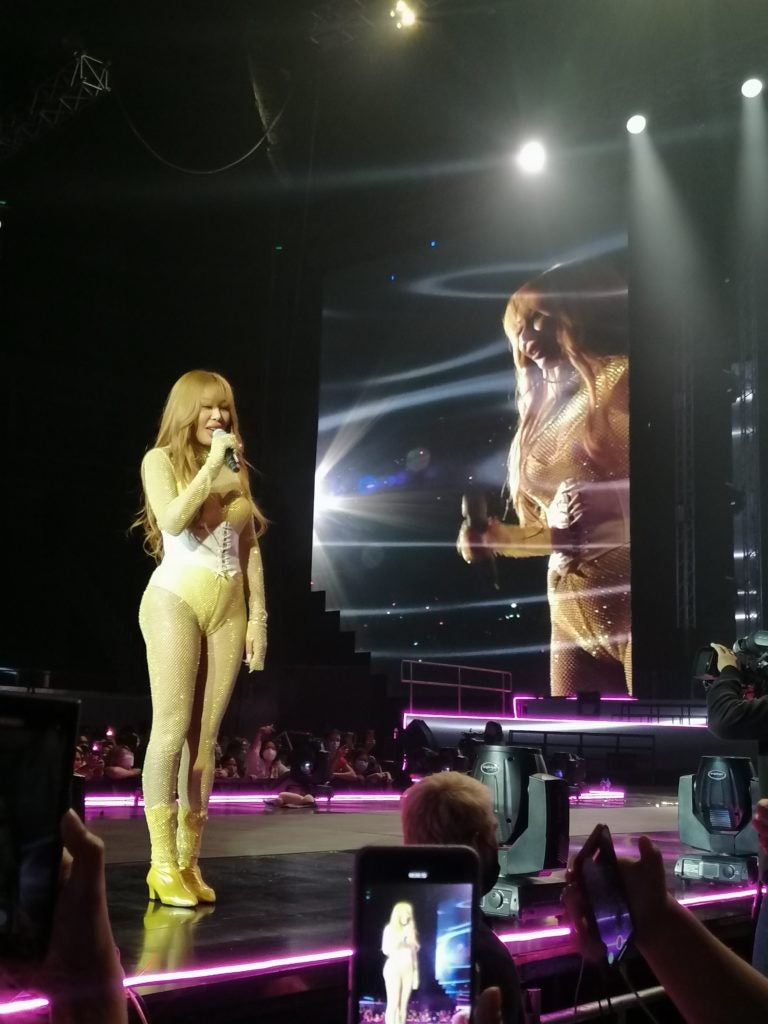 She also shared that she feels good that she’s now able to perform and see her fans. “It’s crazy how two years had already passed because of COVID. The fact that I get to be able to perform, it feels good because, for two years, I was trapped, we’re all trapped. So, being able to travel around the world and see my fans, it’s just an amazing feeling,” she stated.

18 years into her debut, Jessi has achieved many accomplishments under her belt. But for her, this is only just a beginning.

“I debuted when I was like 15 or 16, so it’s been a long journey. However, I feel like this is just the beginning for me now. I’ve learned a lot, been through a lot, but nothing is going to break me at this point,” Jessi shared. 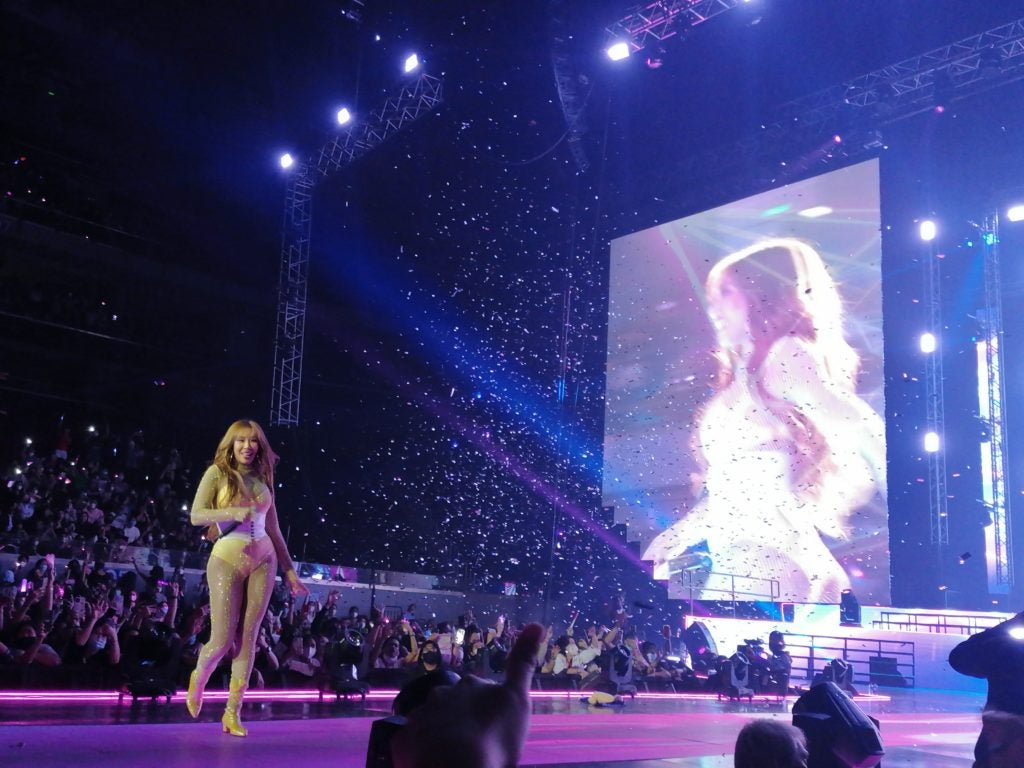 “However, I’m not gonna lie, though, my back hurts. My back [reflects] my age, and I’m starting to feel it,” the idol shared with a laugh. “But mentally, I’m just very grateful. I can’t predict the future, but all I know is that I worked so hard, I’m such a perfectionist, and no one can stop me at this point.”

So, in what direction would Jessi’s music career go in the future? For her, while she can’t predict what’s going to happen in the future, Jessi will continue to be authentic and unapologetically herself.

“I just hope to remain who I am, become a better person, a role model to a lot of these children,” Jessi answered. “I don’t know. I feel like I can’t predict the future, so I just have to do what I have to do, live in the present, and be authentic because that’s what got me here.”

She added: “I think by just being myself and being unapologetic about it, and having a voice for women, I think that’s what drew a lot of fans, so I’m grateful for that.” 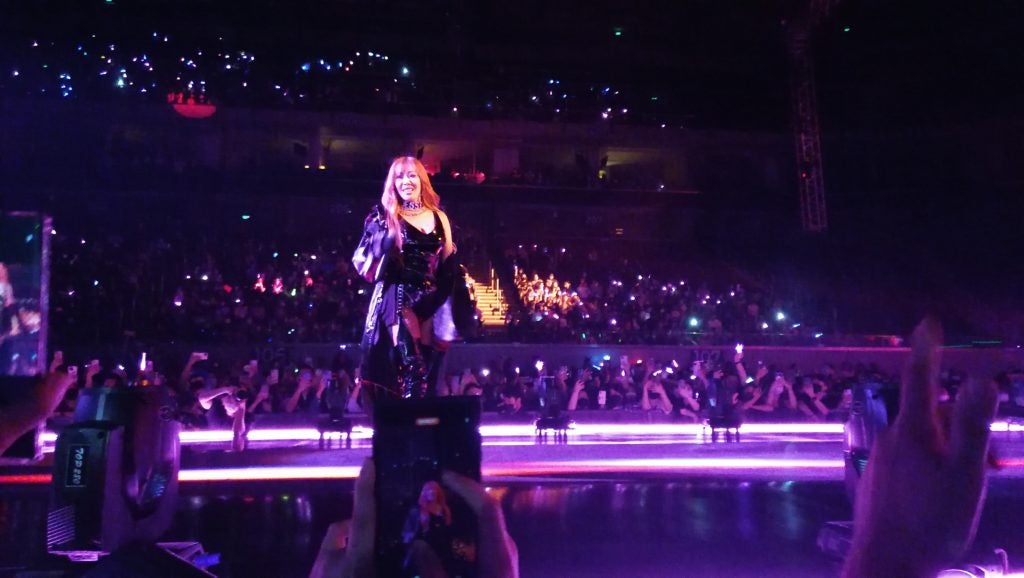 She also shared that she hopes to dip her toes in the R&B genre as well, explaining that she wanted to make music that shows not only her vocals and capability but also the personal stuff she’s going through.

“I’ve done a lot of rap and pop music, but I want to do more that shows the personal stuff of what I’m going through. And now that I’m older, I have a lot of creative control. I would love to definitely make more content that’s something personal, and showcase more of my vocals and capability,” Jessi shared.

There’s no denying that Jessi’s music is unique as she never failed to show her true self. But how different is Jessi’s persona onstage from her real life?

“I feel like my personality onstage is definitely Jessi, and when I’m offstage, I’m Jessica. I become a different person,” Jessi said. “Right now [during the interview], I’m mellow and calm, but when I’m onstage, I feed off the energy of the audience. Depending on that I just become a beast, so that’s why the [lyrics in the ”What Type of X” says], ‘I’m a different type of a beast.’” And she did just that. 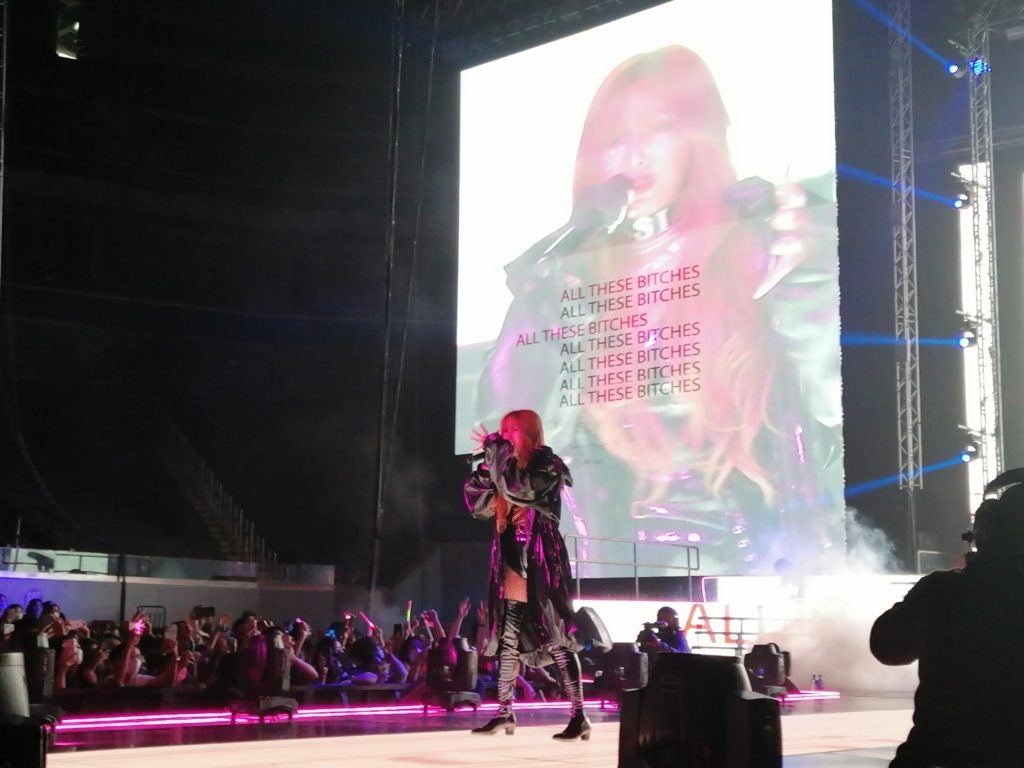 As soon as the K-Pop idol hit the stage, Jessi became a different type of beast as she kicked off the show with “What Type of X,” followed by “Ganji,” “Don’t Touch Me,” and “Put It On ‘Ya.”

When Jessi started to address the crowd, her fierce demeanor became soft and emotional. “You guys, I can’t cry tonight,” Jessi told the Filipino Jebbies. “Thank you so much for coming. You know this is my first concert ever, right? Thank you so much for being here. […] I just wanted to say thank you, guys, and thank you for loving Jessi.”

Jessi then continued to heat up the arena with her electrifying performances of “Numb,” “Arrived,” “Boing,” and “Gucci.”

She also showed that she’s truly that “B” as she told the crowd that she doesn’t give a f*ck to other people’s opinions about what she’s wearing or doing with her body. “In Korea, I can’t wear outfits like this,” Jessi said while clad in a black bodysuit. “It’s not that it’s bad, people are just conservative […] But I don’t give a f*ck. It’s my body and at the end of the day, I’m 33, guys. I’m not going to be 33 forever.”

The arena was then filled with loud cheers from her Filipino Jebbies, and it just became louder when Jessi sang “Who Dat B.” The crowd’s vibrant energy continued as Jessi performed “Down,” “Spirit Animal,” “Wet,” and “Drip.”

At one point, Jessie even praised her Filipino fans, saying: “Hey! You guys are f*cking good at everything. You can sing, you can rap, you can dance, you guys are pretty. You can do everything! What are you guys bad at?”

As Jessi took a break and prepared herself for the next set of the act, a montage featuring Jessi’s childhood to adulthood was shown on the big screen. Filipino Jebbies were in awe as they saw Jessi’s cute child photos. 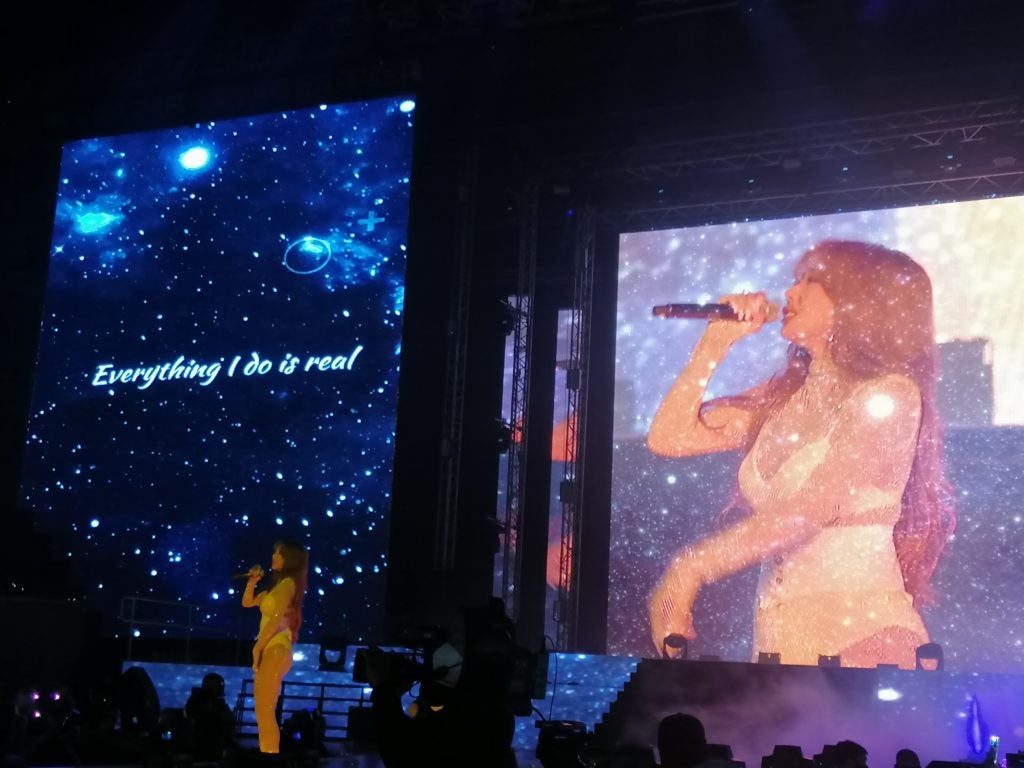 Shortly after, fans opened their flashlights to light up the arena as Jessi appeared on stage rocking a gold ensemble to serenade her fans with a tear-jerking performance of “Star.” After the performance, Jessi reminded everyone that “you’re all a f*cking star.”

Jessi isn’t the only one that surprised her fans with electrifying performances. Filipino Jebbies have also prepared a fan project where Jessi’s fans and loved ones congratulated and sent her some love for her first-ever concert. These messages tugged at Jessi’s heartstrings, which made the hip-hop queen cry again. 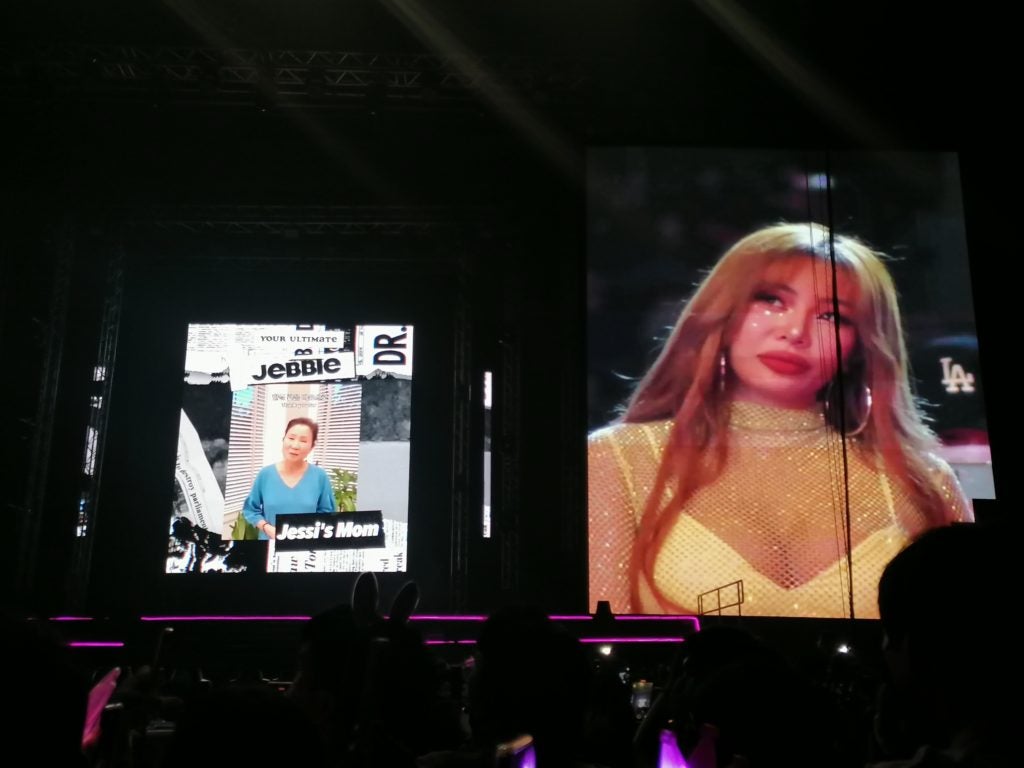 “You know it’s not too long ago where I wanted to give up on everything,” Jessi confessed right after seeing the video. “But, uh, thank you for making me realize I love what I do. I’ve been waiting for this moment for my whole entire life.”

She then told the crowd that she couldn’t cry anymore. To switch up the solemn vibe of the venue, Jessi turned up the party by performing her single “Cold Blooded,” followed by her hit song “ZOOM.”

Jessi wrapped up the night with electrifying performances of “NUNU NANA,” and “SSENUNNI” as her encore song. The K-Pop idol thanked her fans and promised to come back to the Philippines.

Here’s to hoping we’ll be seeing you real soon, Jessi!

Jessi’s “Zoom in Manila” was presented by Neuwave Events and Productions. 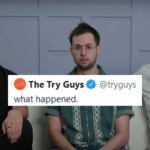