LeBron James surely can shoot those hoops, but did you know that he can also showcase some dance moves?

Yes, you read it right. The 6-foot-9 tall Lebron James grooves along Kendrick Lamar’s songs during his concert in Vancouver over the weekend.

The basketball star, in a monochrome white outfit, is seen having the time of his life at the VIP section with wife Savannah, who was also celebrating her birthday.

The four-time NBA champion caught the attention of fans when he showcased some random dance moves, a specially ’rare’ moment for someone who’s always spotted only on the court. That’s why there’s no doubt that the clips immediately took over social media.

LeBron was LIT at the Kendrick Lamar concert 🔥

In different videos, the athlete was seen dancing to some of the tracks of the Grammy award-winning superstar like “HUMBLE,” “family ties,” and “Love.”

In a tweet, he expressed how he enjoyed his first visit to the city, “Vancouver!! Thank you for the hospitality over the weekend. 1st time in your beautiful, wonderful city!,” he wrote. James also took time to appreciate the rapper. “@kendricklamar you’re 1 of a kind my brother! SPECIAL show by a SPECIAL person! Appreciate the love!,” he continued.

Vancouver!! Thank you for the hospitality over the weekend. 1st time in your beautiful, wonderful city! @kendricklamar you’re 1 of a kind my brother! SPECIAL show by a SPECIAL person! Appreciate the love! 🙏🏾✊🏾🤎👑

These two “kings” of their respective fields have been good friends for quite some time now. James would occasionally post videos of him vibing to Lamar’s songs, especially when the latter release new music.

It can also be remembered that the rapper visited the LA Lakers basketball team at their practice facility back in 2018. 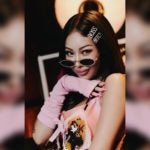 Jessi to arrive in the Philippines for Zoom In Manila 2022