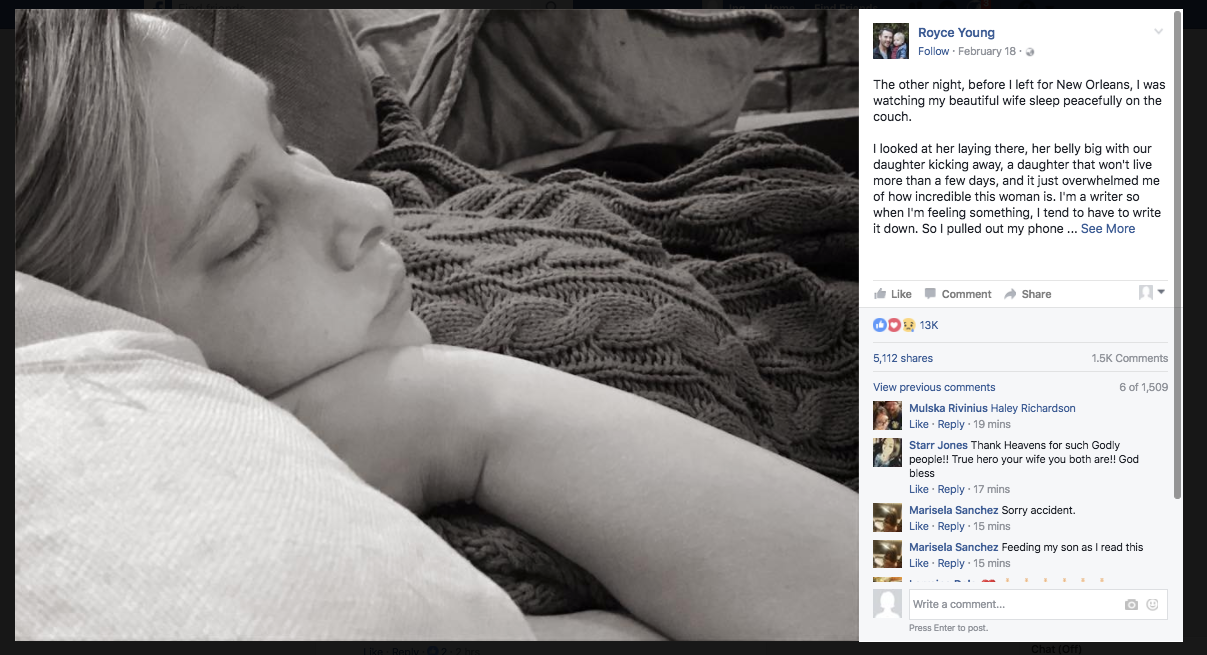 A man from Oklahoma paid tribute to his wife in a beautiful, heartbreaking post on Facebook. Royce Young posted a photo of his wife Keri, who is seven months pregnant with their second child, sleeping peacefully on their couch. He also shared that Eva, the baby girl his wife is carrying, does not have a brain. Despite this, Keri decided to bring the baby to term. Royce described the moment that they found out about it in his post:

“I thought back to the moment where we found out Eva wasn’t perfect, and how literally 30 seconds after our doctor told us our baby doesn’t have a brain, somehow through full body ugly crying, Keri looked up and asked, “If I carry her full term, can we donate her organs?” I remember our doctor putting her hand on Keri’s shoulder and saying, “Oh honey, that’s so brave of you to say.” Like, how nice of you, but come on. Keri meant it. There I was, crestfallen and heartbroken, but I momentarily got lifted out of the moment and just stood in awe of her. I was a spectator to my own life, watching a superhero find her superpowers. In literally the worst moment of her life, finding out her baby was going to die, it took her less than a minute to think of someone else and how her selflessness could help.”

Royce said that as difficult as their situation was for him, he was only watching from the bleachers. It was Keri who was right in the center of it all:

“Keri has been in the trenches the entire time, feeling every little kick, every hiccup and every roll. She’s reminded every moment of every day that she’s carrying a baby that will die. Her back hurts. Her feet are sore. She’s got all the super fun pregnant stuff going on. But the light at the end of her nine-month tunnel will turn into a darkness she’s never felt before a couple hours or days after Eva is born. She’s the one that is going to deal with all that comes with having a baby– her milk coming in, the recovery process, etc, but with no snuggly, soft, beautiful newborn to look at to remind you that it was all worth it.”

The couple has decided to carry their baby to term so that they can donate her organs to other babies who are in need of transplants. Royce, who is a writer for ESPN, also mentioned in his post that he met a child named Jarrius at the All-Star Weekend who is in need of a liver transplant. It was this encounter that inspired him to share his thoughts about his wife’s selflessness and strength:

That kid Jarrius wears a shirt that says “It Takes Lives To Save Lives.” I couldn’t stop thinking about that all day. There’s another family out there hurting and hoping for a miracle for their baby, knowing full well someone else’s baby will need to die first. Eva can be that miracle.”

Royce’s posts has received 13,000 reactions and has been shared over 5,000 times on Facebook. You can read it here. 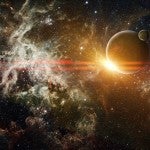 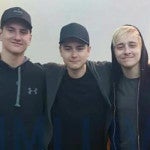 Before You Exit returns to Manila for the fourth time