“What’s the secret to being beautiful?”

Young actress Bianca Umali’s Facebook post that aims to encourage women to embrace their beauty without makeup, turned out to be a “hypocritical” post according to some netizens who noted that she is, in fact, wearing makeup on her picture.

The positive message is there — empowering women about their uniqueness and inspiring them to confidently flaunt their beauty without covering it up with makeup. The actress even dared every woman who’d read her post to post pictures of themselves without makeup, showing they’re content and confident with their natural beauty.

But the thing is, in an era where women are too sick and tired of people telling them the dos and don’ts — shoving them the idea of embracing their natural beauty just because most of them are too fond of makeup, seemed like utter BS to some.

Netizens pointed out that Bianca was promoting “no makeup” beauty when her “on fleek kilay” are definitely done by makeup and she’s wearing mascara, lip and cheek tint on her picture. 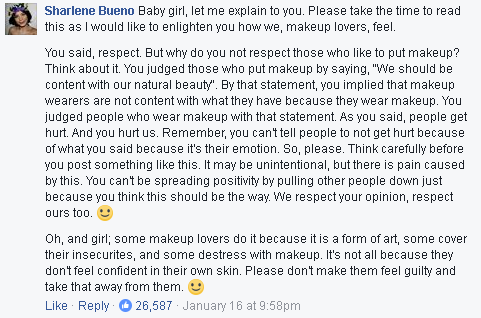 Her post instantly went viral, sadly with a lot of negative comments calling her out for being insensitive, asking her to check her privilege first, and telling her to practice what she preach.

While most are negative comments, some decided to see the bigger picture — that she was trying to give an inspiring message with good intentions, but unfortunately contradicted herself with the picture that she posted.

Makeup or no makeup, women should always feel beautiful and confident about themselves without anyone setting the standard on what should be beautiful for them.