Irish actor and Hawkeye star Fra Fee is the newest addition to the cast members of Disney Plus’s prequel series Beauty and the Beast. He is joined by Luke Evans and Josh Gad who will reprise their roles as Gaston and LeFou, respectively, and The Tender Bar actor Briana Middleton who will play as Tilly, LeFou’s stepsister.

As per Variety’s report on January 19, Fee will portray a handsome, charismatic, confident prince named Prince Benoit Berlioz, who happens to be Tilly’s childhood friend. Fee was recently seen in Marvel’s Hawkeye series as Kazi Kazimierczak, a member of the Tracksuit Mafia, and is also known for his past roles in Les Misérables (2012) and Amazon’s film “Cinderella” (2021).

The Beauty and the Beast series is a prequel to the 2017 live-action film that starred Emma Watson as Belle and Dan Stevens as The Beast. Set in the kingdom of Beauty and the Beast, the series will follow the story of Gaston (Evans) and LeFou (Gad) as they set off on an unexpected journey with LeFou’s stepsister, Tilly (Middleton). While they uncover the mysteries of the past and the dangers of the present, old friends and new enemies reveal the secrets of the kingdom.

The Beauty and the Beast series was first reported on June 15, 2021, where Disney has given the limited musical series an eight-episode order, as per Deadline. The series was developed, executive produced, and written by Gad himself and Once Upon a Time creators Edward Kitsis and Adam Horowitz.

The production is expected to begin in spring 2022 and this was confirmed by Gad in an interview with ComicBook.com. “We’re still planning on shooting this spring, and the scripts are incredible, the music is unbelievable, all new-songs by Alan Menken, we’re casting now,” he said.

As of writing, Disney has yet to announce the official date of the Beauty and the Beast series and whether Emma Watson and Dan Stevens will appear.

Tags: Beauty and the BeastDisneyprequel 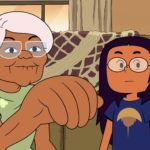