Home Alone is getting a 2021 reboot, and its newly released trailer is gaining undesirable receptions from fans of the original movie.

The reboot, titled “Home Sweet Home Alone,” had its first trailer released on October 12. The film will not be reprising roles from stars like Macaulay Culkin, Joe Pesci, Daniel Stern, and Catherine O’Hara, who all were in the classic Home Alone movies. Instead, it will feature a new 10-year-old kid who gets left at home, Max Mercer, played by Archie Yates.

The trailer establishes that the reboot is very similar to the original movies. It features Max getting left behind at home while his family goes on a trip to Tokyo. He gets excited by the fact that he has the house all to himself, eating a bunch of candy and doing crazy things a kid would only dream of on a trampoline.

A significant difference in this movie seems to be the robbers. Instead of Harry and Marv’s famous Wet Bandits duo, the trailer introduces a married couple trying to break into Max’s home (played by Ellie Kemper and Rob Delaney).

We all know what happens next. Max sets up crazy contraptions and booby traps to try to stop the would-be robbers.

Unfortunately, reactions to the trailer were less than pretty. Most people questioned the need for another remake of a famous classic, which Disney has done more often than not these past few years.

nobody asked for this or wanted this

'Home Sweet Home Alone' trailer got me like: pic.twitter.com/eKc9rGwOZV

Others just simply did not like the trailer at all.

The comment section for the Youtube release of the trailer was full of negative reactions as well.

Others seem disappointed, as they expected some kind of story involving Macaulay Culkin, who played Kevin in the original movies. He will not be reprising his role, and won’t even get a cameo in this new reboot. 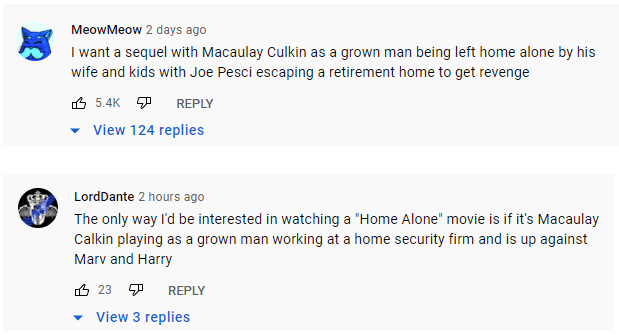 It will debut on Disney+ this November 12 for the holiday season.