Ready yourself for a collision of worlds and genres as local grunge band Gin Rum and Truth (GRT) collaborates with ’Metal Barbie’ Trish Reyes!

Gin Rum and Truth (GRT), is bringing hard rock intensity back on the map. GRT is spirited, headstrong, and willing to give their all on the stage to give any crowd a memorable show. Bound in brotherhood and strong ties of friendship, GRT never fails to awe audiences with their performances.

With “I Got The Flu”, the song that held the Top 5 slot on Jam 88.3’s year-end countdown a few years ago, GRT  brings in their usual grunge-rock intensity in full-force. As the former frontwoman of the metal-electronica band, EVEN, Trish Reyes, lends her vocals to the track in a duet with GRT’s own, Yok Tano, “I Got The Flu” bridges their complementing styles in a single song. Filled with the intense and spirited riffs, the resonating guitar leads, and the vocal rasps GRT is known for, along with Trish’s equally spirited and soulful vocals, the song is packed with excitement and strength by putting these elements in full blast. 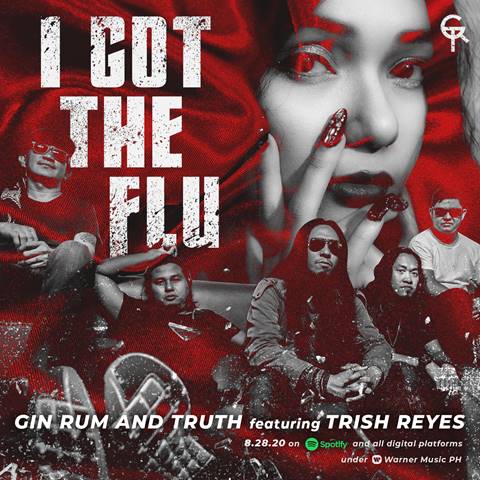 “I Got The Flu” captures the human desire of wanting and craving for something that you can never have. The band brought about this message by making the song as hard-hitting and as true as can be. Composed by GRT’s own drummer, Inigo Mortel, “I Got The Flu” is a track that would definitely make you swing as you listen.

“I Got The Flu (feat. Trish Reyes) is Gin Rum and Truth’s third release under music label, Warner Music Philippines and will be available on Spotify, Apple Music, and all digital streaming platforms on August 28, 2020 (FRIDAY)!

“I Got The Flu”’s official music video, as well as its performance videos will be out soon!

For updates about the song and the band, you can visit Gin Rum and Truth’s official pages here:

Gin Rum And Truth
I got flu
Local grunge band Gin Rum and Truth collaborates with Trish Reyes for 'I Got Flu'
Warner Music
INQPOP! Stories we think you might also like: