The Single Is the Latest Offering from Keys’ New Album ALICIA, Set for a Fall Release

Fifteen-time Grammy winner, global superstar Alicia Keys has joined forces with GRAMMY-nominated R&B sensation Khalid for her new single “So Done.” A slow-burn R&B jam, the song sees the pair’s soulful voices crooning smoothly over a sleek guitar-driven instrumental, with lyrics about saying goodbye to any sense of false self. “So Done” was written by Keys, Khalid and GRAMMY and Academy Award Winner Ludwig Göransson, and is the latest single from Key’s forthcoming seventh studio album ALICIA, which is set to be released this fall, via RCA Records. Stream and download “So Done” HERE. Pre-order or pre-save ALICIA HERE.

The official music video for “So Done” was also released today. Starring actress Sasha Lane (American Honey) and directed by Andy Hines (Lizzo, Anderson .Paak), the visual offers a stunning aesthetic with Keys and Khalid performing at a prom scene that welcomes a cathartic disruption. Styled by Jason Bolden, Keys is wearing a Versace blazer with Helene Zubeldia crystal bra, and Tibi pants. Watch the “So Done” Official Music Video below. 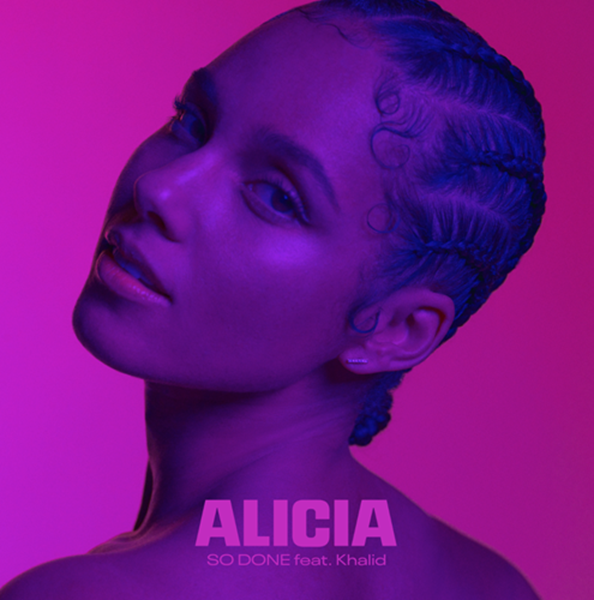 “I’m so excited to share ‘So Done’ with the world. We call it a trance! The energy is inescapable! Collaborating with Khalid on this one was very special,” said Keys. “This song is about being done with changing yourself for the sake of others and letting go of any one else’s ideas of how your life should look.”

“So Done” follows Keys’ smash hit “Underdog,” which was released earlier this year from the forthcoming LP, instantly becoming the most added song at Top 40 radio. Keys performed the song, which earned both BET and MTV VMA nominations this summer, during her critically praised hosting stint at this year’s GRAMMYs ceremony. In late 2019, Keys offered the first sampling of ALICIA with “Show Me Love,” featuring Miguel. The song earned Keys a record-extending 11th number 1 on the Billboard Adult R&B Songs airplay chart. The album, which will show the many sides of Alicia at this current point in time of her life journey, is also preceded by three other masterful tracks: “Time Machine,” a supersonic four-on-the-floor anthem about the freedom that comes with letting go; “Good Job,” a powerful ballad praising unsung heroes and frontline workers, which premiered in April during a special COVID-19 global town hall on CNN; and the emotional “Perfect Way To Die,” which Keys dedicates to innocent Black lives lost due to police brutality. She gave a moving performance of the song during the BET Awards broadcast in June.

Keys plans to bring the new album to life in the summer of 2021, during rescheduled dates of her upcoming ALICIA: The World Tour, originally scheduled for summer 2020 before the global pandemic put a pause on live music gatherings. For more information on tickets and dates, please visit HERE.

The album is a counterpart piece to Keys’ New York Times Best-selling book More Myself: A Journey, which was released in March as the first title on Oprah’s new imprint with Flatiron Books. For more information on the book, please visit HERE.