While couples all around the world have been finding ways to maintain relationships during these extraordinary times of the COVID-19 pandemic, three queer couples here in the Philippines have opened up on how they withstood the crisis, whether they had to stay apart or spend months in lockdown together.

One gay couple dating for months found themselves under the same roof, while another couple going strong for three years were suddenly in a long-distance relationship to follow lockdown orders.

What they all have in common is showing up for each other in the simplest of ways, from taking turns in doing chores to planning online movie nights, to keep the love alive. 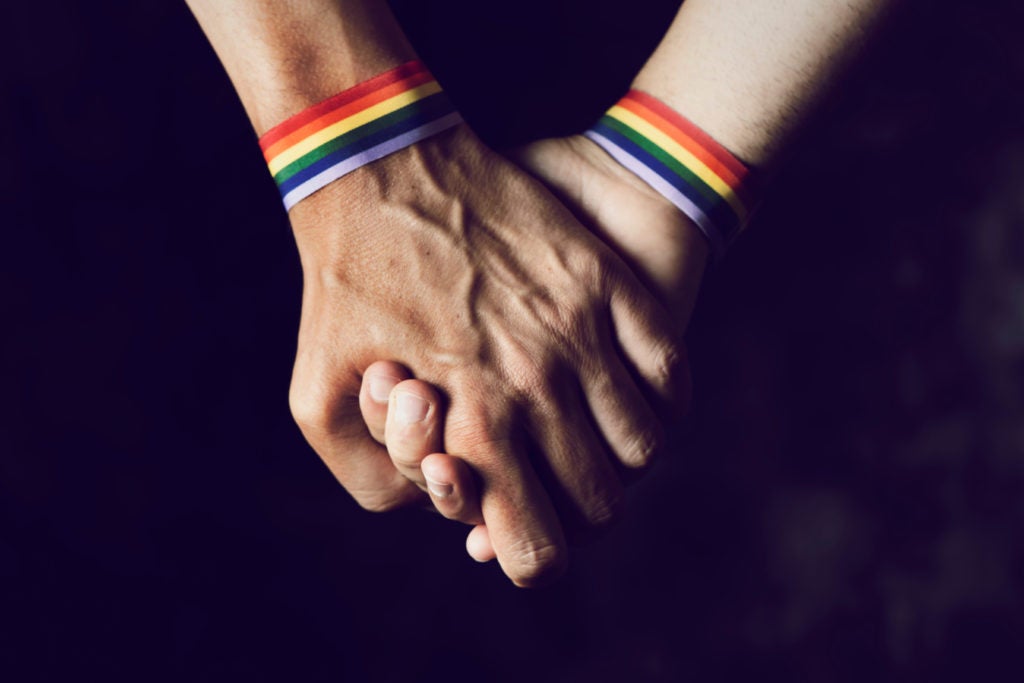 When the Metro Manila enhanced community quarantine was enforced, Allan, 32, and Daniel*, 26 who have been dating for eight months, found themselves living together in the home of Allan’s parents in Quezon City. Both identify themselves as gay men.

“My parents are very open when it comes these matters,” said Allan, a government employee.

Meanwhile, Daniel, a freelance hair stylist, has faced discrimination from his own family — he comes from a line of police officers and soldiers in his father’s side of the family.

“He doesn’t want his name to be stained, to be humiliated,” he said of his father’s view of him being gay.

Prior to the lockdown, they saw each other only on weekends. Allan would pick up Daniel from work and they would eat out or have a drink.

The two met through a gay dating app — Daniel messaged Allan because he saw that he was a fellow dog lover. As they got to know each other, they found that the care they showed to animals translated into how they cared for each other.

Allan found it refreshing that they would talk about family and dogs, because those that he would meet on the app would usually rather talk about having sex. He also appreciated how family-oriented Daniel was. He even notes that Daniel, compared with his past boyfriends, is the only one who reaches out for the hands of his parents for the traditional gesture of mano, to be blessed.

“My parents are happy that he is like that,” Allan said.

Living together, especially during a public health crisis, allowed them to see each other’s true colors. They got into disagreements over Daniel’s ex, which would make Allan give him the cold shoulder.

“I proved to him a number of times how much I love him, which is why I am with him now,” Daniel said.

For his part, Allan learned to be more understanding, “I realized that I need to adjust because he is younger than me; it shouldn’t be that he always has to be understanding of me.”

They also easily fell into a routine when it came to chores and finances.

“At home, when he cooks, I do the dishes and vice versa,” Daniel said.

“I understand that we have responsibilities with our own family so every time we have extra money, we make sure to save it for them,” said Allan.

During the quarantine, they have been working as a team on Allan’s online business. Daniel helps in delivering orders, promoting the business on his Facebook account and telling friends about it.

“So, I feel like I have a partner in what I do,” said Allan.

“He supports me in my work,” said Daniel. “He accepts me completely.” 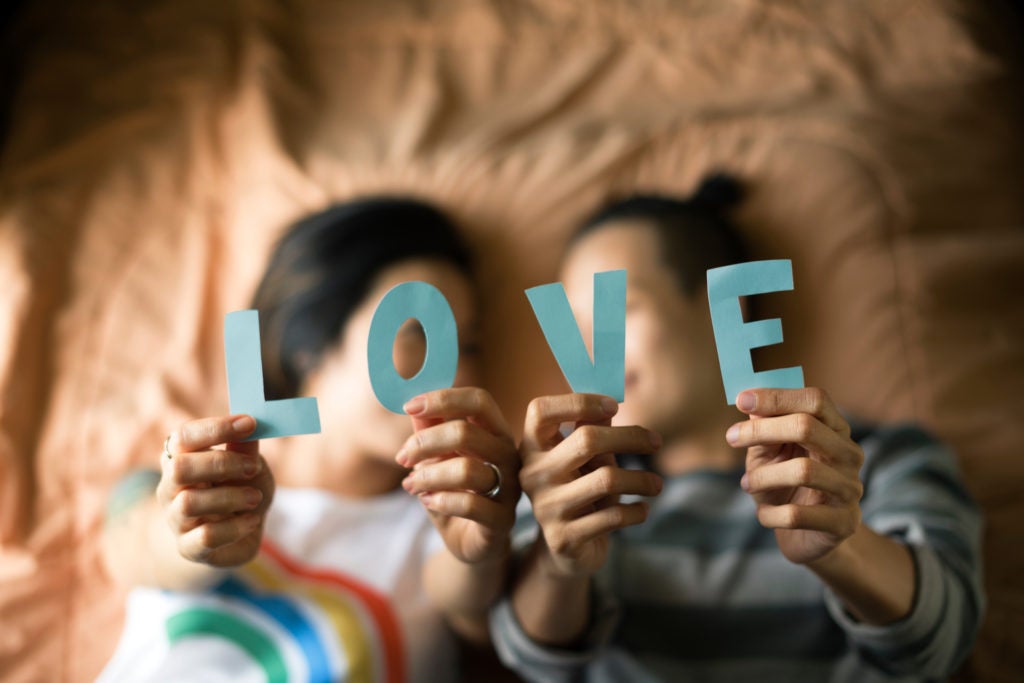 Rai, 26, and Sam*, 23, were in the same circles in a top Manila university, but weren’t exactly friends. Rai, a content editor, identifies as bisexual, while Sam, a graphic artist, identifies as a lesbian.

Twitter and their passion for social justice helped bring them together: when Rai saw Sam being attacked on Twitter over something political, she showed her support.

“In my mind, ‘She’s right and also she’s cute,’” Rai quipped. They followed each other in the platform, but it seemed like that was the end of their interaction.

One night in 2016, Rai tweeted to ask who was free near school to have dinner. Even if she was not in the area, Sam volunteered. She already had a crush on Rai by then.

“I have a thing for girls who are curly-haired,” she said, adding that Rai was a person who piqued her curiosity as she seemed “mysterious or intimidating.”

Even if they thought that their first meal together would be awkward, they ended up talking for four hours straight. A month later, they admitted their feelings for each other, and they have been together for three years since.

Prior to the lockdown, the two were classmates for the first time while taking their masters degree together. After being able to see each other every day for about a year, they had to be apart for three months and counting.

Rai is in Quezon City while Sam stays in Makati, and even if some restrictions have been lifted, they would still rather stay home to avoid getting infected.

Before taking up their masters, they also happen to not see each other every day, just once or twice a week. So they brought back some of their old habits from that time, such as a their nightly “brief.”

“I would talk about everything that happened to me that day. And then Sam would react,” explained Rai.

Sam says she prefers getting to talk this way, because they both have work and would rather not be distracted throughout the day.

On other ways they have “dates,” Rai said, “Sometimes we’d plan movie nights, or if it’s a monthsary or we want to read a manga, we’d schedule it in.” While watching or reading, they would chat with each other.

The first thing they want to do when they see each other is to cuddle. Sam said, “[I miss] her presence and physical touch.”

Both said they would not change anything about each other. Then Rai pipes up, “I hope we become neighbors.” 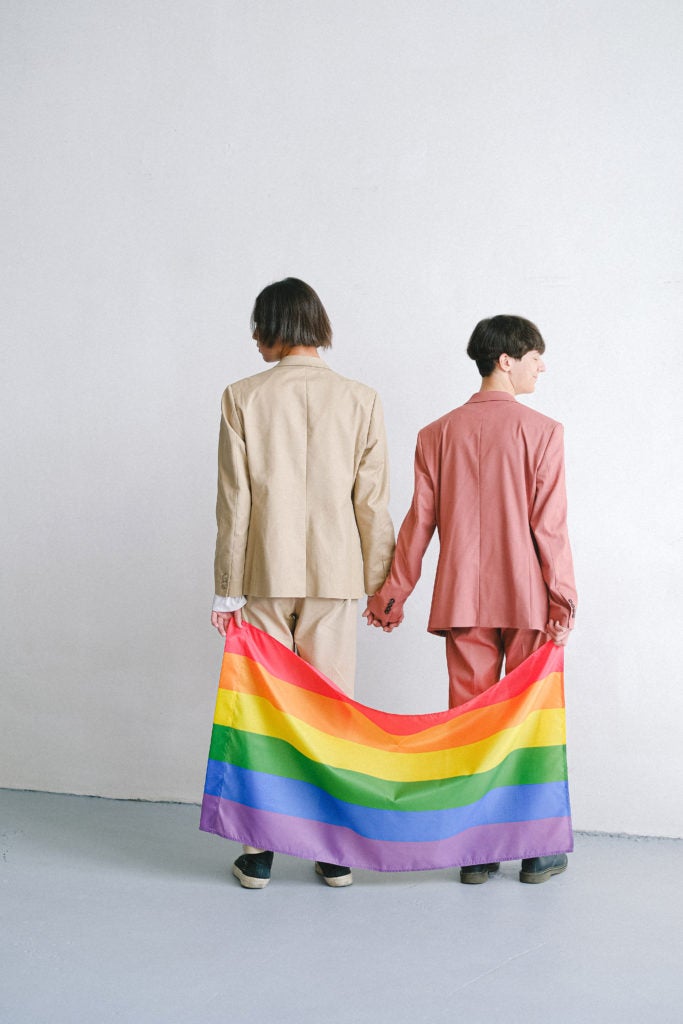 Nikki*, a social media manager, and Kath*, a college student and graphic designer, met at the hole-in-the-wall bar Today x Future in Cubao in 2017. Both identify as bisexual.

“She is really my type. I’m really into androgynous people,” said Nikki of Kath.

They spent the night exchanging glances, to the point that Kath thought there was something on her face. Finally, after closing hours, Kath approached Nikki. They exchanged numbers and have been inseparable since.

Nikki jokes that they became the stereotypical “U-haul lesbians” – even when they were starting out as friends, Kath would stay at Nikki’s apartment for most of the week.

When the quarantine was announced, they decided to stay with Nikki’s mom and uncle in a province in Central Luzon.

Since they were already used to living together, the stress that they went through was from the uncertainty during the pandemic. Nikki’s salary was cut as businesses were impacted during the lockdown. At the same time, her workload increased as more businesses went into digital marketing.

“I feel like I would go crazy if she wasn’t there as my support system,” Nikki said of Kath, who would comfort her during breakdowns.

Going to gigs used to be a part of their date nights. When more online stores opened again, Kath ordered a bass guitar. Shortly after, Nikki got an electric guitar. The two complement each other on their music abilities.

“I can write songs but I can’t lay them down on the instrument,” Nikki remarked. Kath, meanwhile, is able to play songs by ear.

Both also agree that even if they have been together every day, it is important to have time for themselves and their own friends. Nikki has a video call with friends every two weeks, while Kath has done a live stream of herself drawing, allowing friends to make requests. Nikki advised, “Even if you love that person so much, they can’t be everything that you need them to be.”

“She said it’s OK, she has a feeling that the way they think is progressive,” said Nikki. “I’m afraid of what they might think, that’s why I’m not really out.”

In the meantime, Nikki and Kath continue to find comfort in each other.

“I was surprised that I’m her first partner because she is easy to talk to and we don’t fight,” Kath said of their two years together.

Nikki added, “If someone does something wrong or hurts the other person, we [verbalize] that, we apologize, and we try to get a solution for it if possible.” 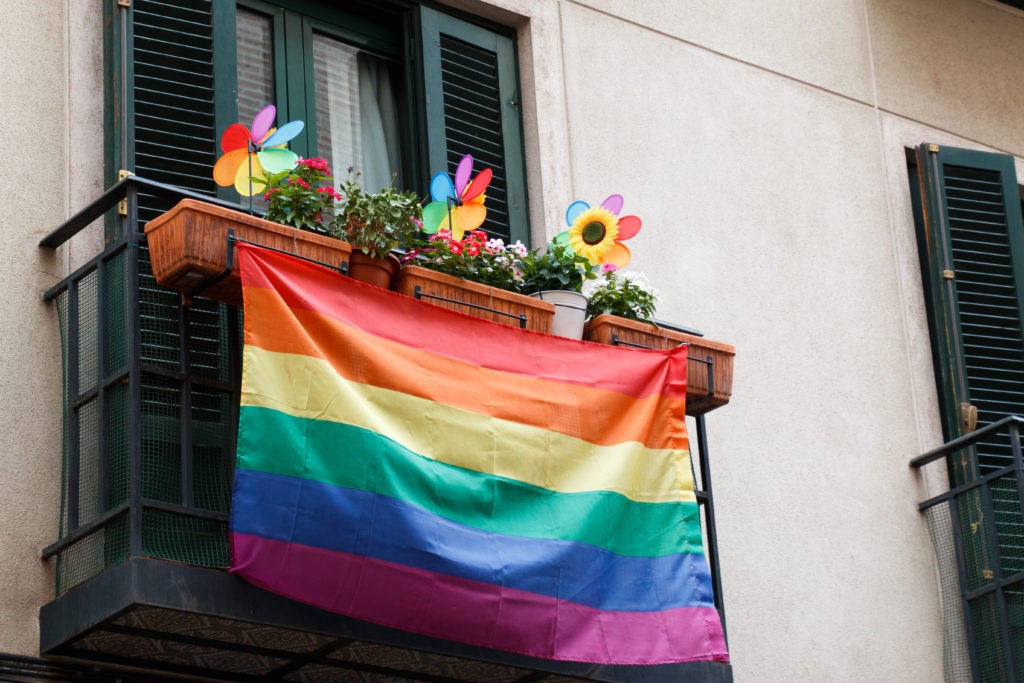 Pride remains even without a parade

Despite having lasting relationships — including those that survive a pandemic — members of the LGBTQ+ community continue to experience discrimination for simply being who they are and who they love.

If there is a benefit to the lockdown, Rai said in jest, “They can’t discriminate us if we’re at home.”

“There are times when you’re singled out because of a same-sex relationship,” Sam shared, citing an instance when a colleague reported her at work simply because she was seen holding hands with Rai. Thankfully, her boss was “chill” about it.

But there has been a time when Sam went into a job interview and was told, “‘Di ka fit, gets mo?” (You’re not a fit, do you get it?). She presumes this is because she looks butch. It is hard not to think that way given how she has witnessed others discriminated too, such as when she worked in a government agency. An assistant secretary refused to hire someone because he was “too gay.”

This is why besides getting the anti-discrimination bill (ADB) passed, Sam hopes to see changes in the system so that it would be implemented properly.

“There are the poorest of the poor who are part of the [LGBTQ+] community,” she noted. “More than the discrimination issue, it’s more of [getting] representation for them as people especially in times when they need justice for something.”

The ADB can help members of the LGBTQ+ community in getting an education, according to Daniel, who says many do not finish their studies because of being mocked in school, and that this serves as another barrier in getting work opportunities. Allan also grew up defending himself from being bullied. 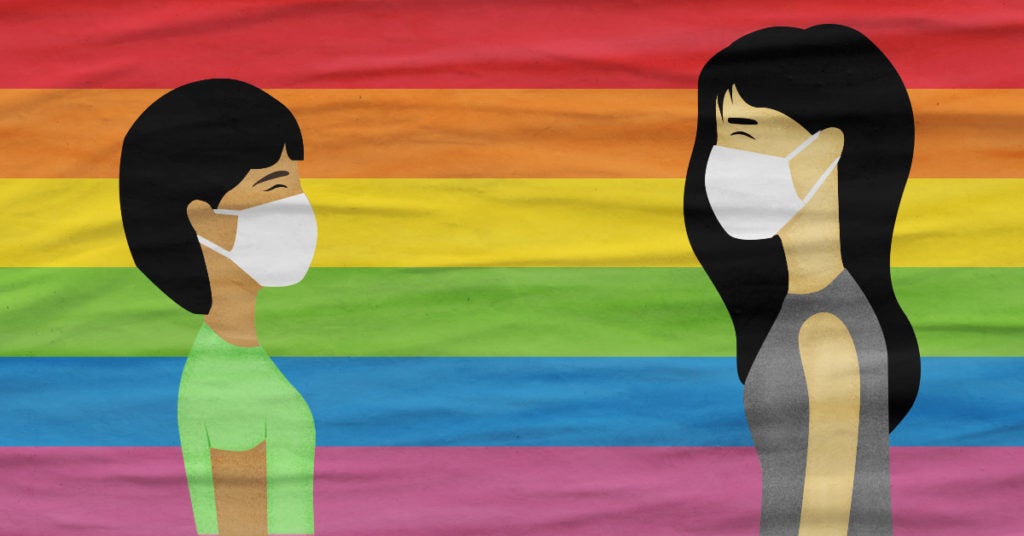 “I would go to their parents so that they would tell their kids,” he said. He also notices that his friends who are trans women bear the brunt of harassment in the community, and likewise stands up for them.

Nikki hopes that gay marriage will one day be legalized, so that she and Kath can better plan for their future.

“A big part of it is a declaration of love, but it’s really practical things,” she explained. “We want to be able to have combined income, get benefits from SSS, PhilHealth, from the government [in] owning a house, or [having] children and retirement.”

In the absence of a Pride parade due to the coronavirus pandemic, both Allan and Daniel intend to support Pride events on social media. Kath and Nikki used to attend Pride marches together, but this year, they plan to post a music performance on social media to mark the occasion.

The parade after all is but an element of Pride month, which remains to be a protest for equal rights, as much as it has always been a celebration of love and acceptance. JB

[Editor’s note: The full and/or real names of the interviewees were either withheld or changed (*) as requested.]

Solo parenting: A tough task made tougher by COVID-19