Follow us:
This picture shows a letter co-written by Dutch painter Vincent Van Gogh and French painter Paul Gauguin on the eve of its auction sale at Drouot auction house in Paris on June 15, 2020. (Photo by Christophe ARCHAMBAULT / AFP)

A letter written jointly by Vincent Van Gogh and Paul Gauguin in which they talk of their brothel visits and share their mutual admiration, sold for 210,600 euros ($236,000) at auction in Paris on Tuesday.

The letter, which mentions how they wanted to revive modern art and set up an “association of painters”, was signed by both painters. 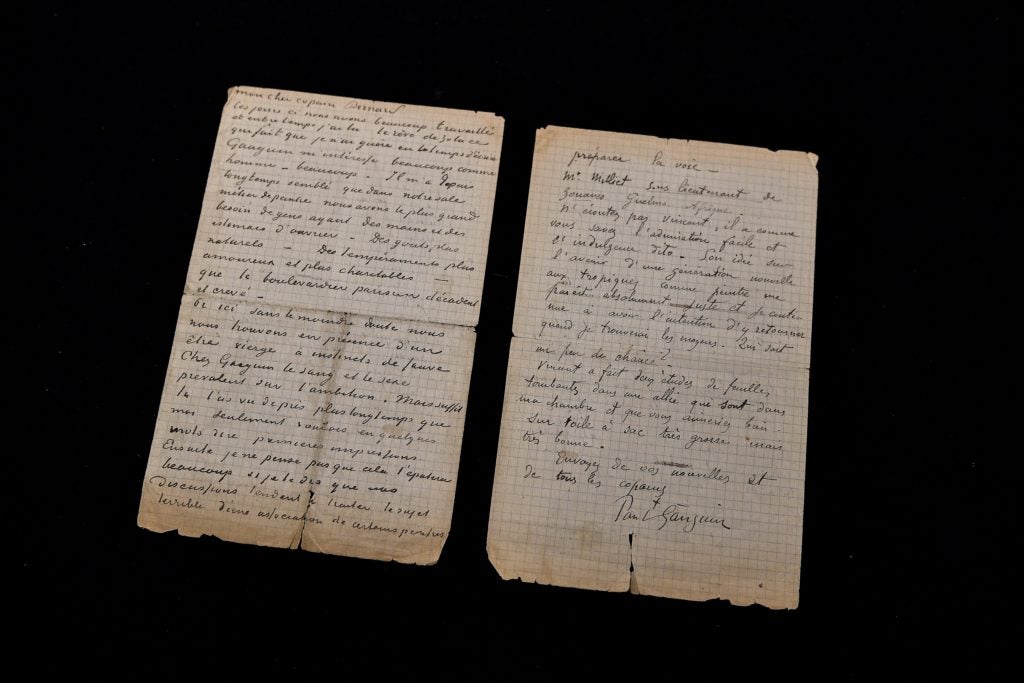 This picture shows a letter co-written by Dutch painter Vincent Van Gogh and French painter Paul Gauguin on the eve of its auction sale at Drouot auction house in Paris on June 15, 2020. Image: Christophe Archambault/AFP

It is addressed from Arles to their painter friend Emile Bernard and dated November 1/2, 1888, less than two years before Van Gogh died at the age of 37.

Gauguin arrived in Arles, where Van Gogh was living, on October 23, 1888 and the two spent several stormy months painting together.

It was during the fateful visit that Van Gogh lost his ear, presenting it to a brothel maid.

The incident effectively ended his often strained relationship with Gauguin.

In the letter sold by Aristophil Collections at the Drouot auction rooms in Paris, both men insisted that art was surging towards what Van Gogh called “an immense renaissance”.

The Dutchman also writes about his visitor and their escapades.

“Gauguin interests me a lot as a man,” he said.

“It has long seemed to me that in our dirty profession of painter, we have the greatest need for people with workers’ hands and stomachs, with more natural tastes, more loving and more charitable temperaments than the decadent and exhausted Parisian boulevardier.”

He describes Gauguin as “a virgin being with wild animal instincts. In Gauguin, blood and sex prevail over ambition.

“We made some excursions to the brothels and it is probable that we will often end up going to work there.”

Van Gogh yields the pen on the last page to Gauguin who would have a successful sale of paintings at Drouot in 1891.

“Do not listen to Vincent,” he wrote. “As you know he is easy to impress.”

As for “his idea on the future of a new generation in the tropics as a painter”, it “seems absolutely right to me and I continue to intend to return to it”.

Gauguin fulfilled the “tropics” idea by going to live in French Polynesia where he died in 1903, aged 54. NVG