The Philippines’ first-ever children’s interactive museum is aiming to build a community of communities as it celebrates its 25th year. Museo Pambata is all set to activate many more interesting exhibits, programs, and activities in its next 25 years. Those kicked off with a grand motorcade parade along Roxas Boulevard on January 22, 2020.

“After 25 years, I am glad we are still around,” said Museo Pambata Foundation, Inc. Chairperson and Founder Nina Lim-Yuson, Ph.D. “Museo Pambata is an institution in itself. It is all about the Filipino child and how the philosophy of experiential learning through using the senses can educate them. I thank all the people, organizations, and government bodies for continuously supporting us.”

Through the years, the museum has instituted remarkable programs that inspire people and other organizations throughout the country. Aside from bringing the mobile library to the underprivileged areas, it also facilitates an informal school for street kids in Manila, a project in collaboration with Child Hope. It has so far accommodated more than 7 million kids (excluding those served by the mobile library and other remote activities) in its first 25 years.

The children’s museum started as an idea Lim-Yuson, who is an early childhood educator and mother of four, had when she brought her kids to the Boston Children’s Museum in America. “I thought then, having the same museum here in the country will be good. It was my mother (former Department of Social Welfare and Development Secretary and former United Nations Special Envoy for the International Year of the Child Estefania Aldaba-Lim), who had just then retired, who said let’s do this,” she recalled.

Throughout the years, Museo Pambata has grown, along with the initial batches of children who frequented the interactive museum. “Most of those kids who are now around 30 to 35 years old still come back, this time with their own kids in tow—the new generation of children we are serving. It makes us prouder,” said Lim-Yuson.

The celebration of Museo Pambata’s silver anniversary is more special because the City of Manila, under Mayor Francisco Domagoso (Isko Moreno) just granted another 25-year lease contract for the use of the Elks Building in Roxas Boulevard to the foundation. “It is now easier for us to make plans for the enhancement of rooms and creation of new exhibit areas because of the long-term assurance,” said Bambi Mañosa-Tanjutco, the new Museo Pambata President who worked hard for this lease extension.

To further celebrate the silver anniversary and move forward to the next 25, the museum is set to open a new exhibit in the next few weeks—Batang Katutubo, which will showcase tapestries, music, and language of the stewards of the environment, the indigenous people. Throughout the year, the celebration will continue with MuseoLympics (a tournament featuring traditional Filipino games), the commemoration of Araw ng Maynia in June, and the National Children’s Book Day (coinciding with the 40th annual National Children’s Book Awards) in July.

Mañosa-Tanjutco is also spearheading the new direction being taken by the museum. “We are currently curating new exhibits, enhancing spaces, and working on the exterior of the museum. Set to be built this year is the new playground donated by the Mañosa Tukod Foundation, through the ‘Awit at Laro’ Project.” Museo Pambata is also looking forward to opening its own museum café to serve food and refreshments to kids and their parents.

Indeed, the next 25 will be jam-packed with more activities and programs. “I would like to encourage more people and companies to help us get our vision fulfilled. It will be exciting times for Museo Pambata,” Manosa-Tanjutco promised. 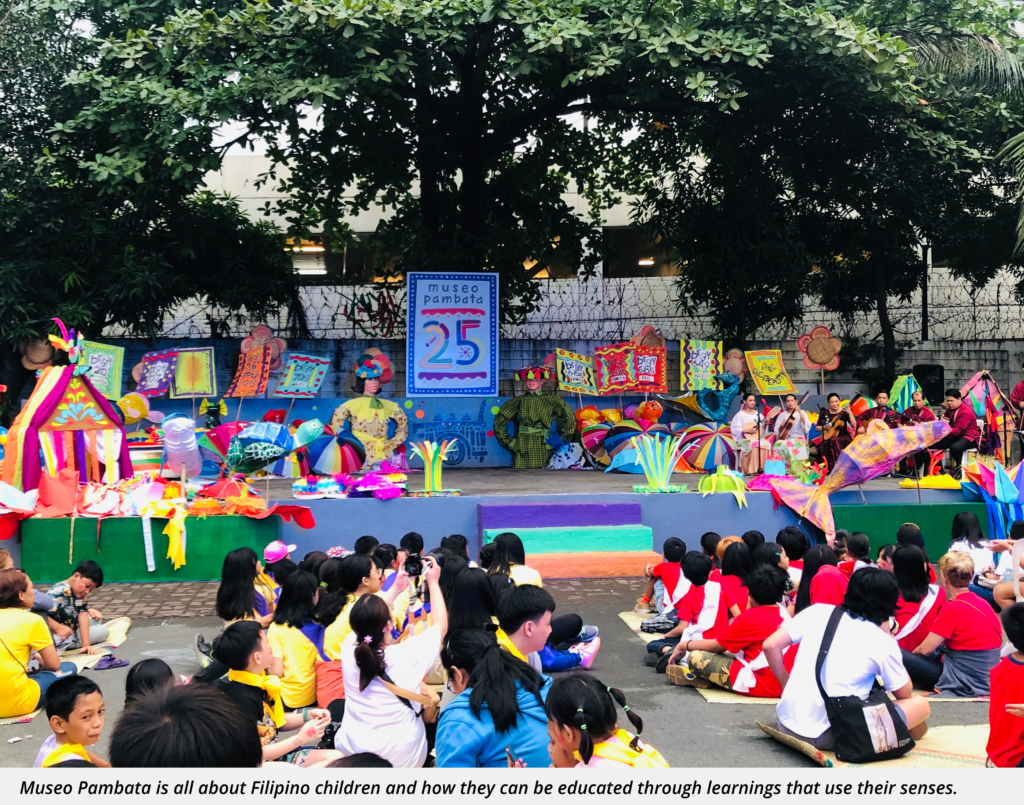 Museo Pambata is open Tuesdays to Saturdays from 8 a.m. to 5 p.m. with a minimal entrance fee.