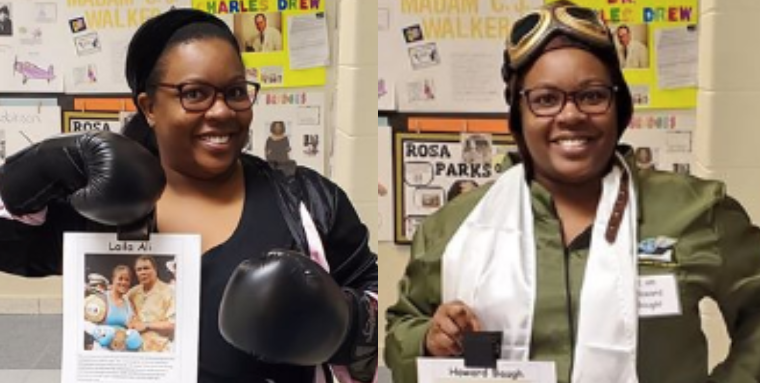 Latoya McGriff, an elementary teacher in Virginia, United States, made it a point to dress up as different historical black figures each day of Black History Month last February.

McGriff teaches at Creekside Elementary School in Suffolk and decided to dress up for Black History Month so she could make her lessons extra interesting for her students, as per Good Morning America on Feb. 27.

“I decided to dress up for Black History Month so that the kids are actually seeing a live person from history,” McGriff said in the report. “I just wanted to bring history alive for the kids.”

McGriff has been teaching for 12 years now and said that most of the population in her school is black.

“It’s important for the children to see that people who look like them have made contributions because it reassures them that they can, too…” she said. “It’s hard to believe in something you don’t see.”

McGriff has taken to Facebook to share her outfits and dressed up as Mary Jackson last Feb. 3. Jackson is a mathematician and aerospace engineer from Virginia. She first started as a math teacher at a black school in Maryland, according to the National Aeronautics and Space Administration (NASA), before going on to work at the Langley Memorial Aeronautical Laboratory. In 1958, Jackson became NASA’s first black female engineer.

I was Mary Jackson today! She was born in Hampton, VA. She was a mathematician who worked as an aeronautical engineer…

Last Feb. 10, Jackson dressed up as Ella Fitzgerald, also known as the First Lady of Song, Queen of Jazz and Lady Ella.

Today I was Ella Fitzgerald! She was born in Newport News, VA. She was a jazz singer. She was sometimes referred to as the First Lady of Song, Queen of Jazz, and Lady Ella!

And on Feb. 28, she dressed up as former President Barack Obama, the first African-American President of the United States.

So today I was President Barack Obama!!! Had to close out the month with our 1st African American President!!! Number 44…

She has also dressed up as Thurgood Marshall, the first African-American Justice of the Supreme Court of the United States, and Henrietta Lacks, whose cancer cells, nicknamed “HeLa” cells, have created breakthroughs in the field of medicine.

Today I was Thurgood Marshall. He was a lawyer who served as an Associate Justice of the Supreme Court of the United States. He was the Court's first African American Justice.

As per the Johns Hopkins Medicine, Lacks’ cells have been used to study the effects of toxins, drugs and hormones on the growth of cancer cells without experimenting on humans.

Today I was Henrietta Lacks. She's from Roanoke, Virginia. Her cells are known as the HeLa cell and her cells lead to…

McGriff also dressed up as Misty Copeland, the first African-American female principal dancer at the American Ballet Theater, among others.

So today I was Misty Copeland. The first African American female principal dancer with the prestigious American Ballet Theatre. It was also the 100th day of school, so I combined the two. #Blackhistory

McGriff’s outfits have since received significant attention online, but while she was shocked by the public’s response, she hoped that her initiative would continue to raise awareness about the relevance of Black History Month in educational institutions.

“I hope that [people who see the story] will implement some type of Black History Program in their school,” she said in the report. “They don’t have to dress up like I did… but I just want people to incorporate black history so that other students of color can see themselves represented in history.”  /ra