When it comes to our crush, we can’t help but be marupok (fragile or easy-to-get, depends on the context) online–no matter how many times we have been seen-zoned. But what would you do if your crush, who disappeared for almost a decade, suddenly popped up in your inbox as if nothing happened?

This is what exactly happened to a woman named “Sally” from Adelaide, Australia. According to news.com.au, the woman was deeply shocked when she received an out of nowhere reply from her former crush—eight years and seven months after she sent her message. 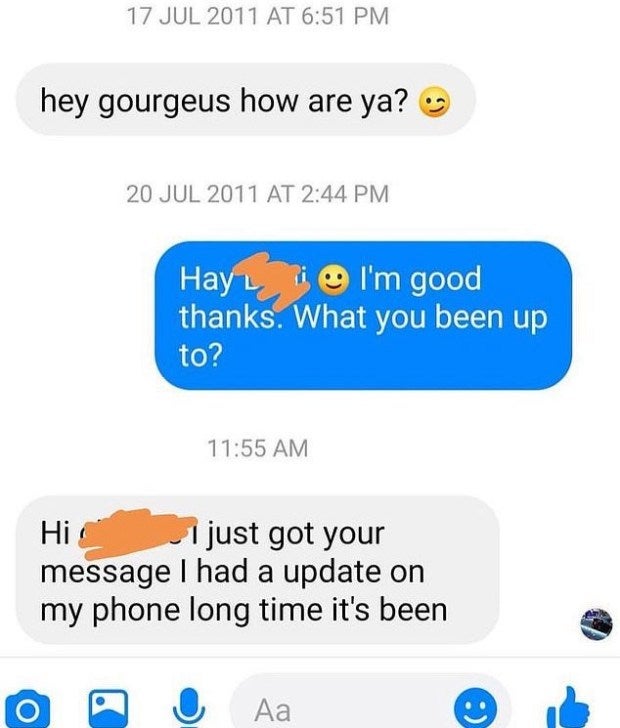 Sally posted on her Instagram account a screenshot of their conversation that started on July 17, 2011. The anonymous guy sent her a cheeky message (with a winky emoji!) saying, “Hey gorgeous, how are ya?”

Since she didn’t want to appear desperate or too excited about it, Sally waited three days before replying with, “Hey, I’m good thanks. What you been up to?”

Hoping that this would lead to a more romantic encounter, Sally’s crush (for some reason) quickly vanished into thin air without even replying to her last message. And just when she thought it was finally over between them, the guy recently sent her a lame explanation.

“I just got your message I had an update on my phone a long time it’s been,” the guy said.

Online users commented that the guy must have been a “man of focus and sheer determination” for having to wait eight years and seven months just to get updates on his phone. Although we have no idea what happened next, it’s quite funny to see how some people can afford to initiate a conversation then leave you hanging.

In the online dating world, this tactic is called “zombieing”, wherein the other person will suddenly disappear from your life then “come back from the dead” by sending you messages like he or she didn’t just ignore you for years. And by the looks of it, Sally had just fell victim to this. Here’s to hoping that she gets closure she needs after this surprise encounter with her old crush.