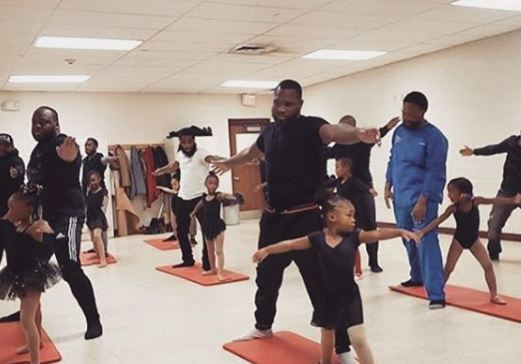 A group of dads from Pennsylvania, USA, has earned praise on social media after they were shown gamely participating in their daughters’ ballet dance class.

The heartwarming video was shared via Instagram by E’chappe Dance Arts, a dance studio based in Philadelphia, last Nov. 10. In the video, black dads can be seen dancing with their young daughters in ballet class, a sight that has since gone viral online and made fans out of actor Michael Ealy, who shared the video on his Instagram page, as well as actresses Jennifer Garner and Kirsten Bell, among others.

“It’s the little things we do that help raise kings and queens,” Ealy said via Instagram on Nov. 12. “S/O (shoutout) to all the fathers out there and the fellas who showed up for this class. SALUTE.”

Erin Lee, the founder of E’chappe Dance Arts, said the annual dance event comprises an hour of ballet and another hour of yoga, which she has called BOGA, as per Good Morning America on Nov. 13. Lee came up with the initiative upon witnessing how involved the dads of her students were in their passion for dance.

“Here we’re really big on dance dads. They do pick up and drop off and are getting the girls ready for dance recitals,” said Lee in the report. “Year-round those dads are here and it’s very acknowledged. We wanted to show the world that this happens.”

Julian Myers, who was one of the dads in the class, said he did not hesitate to join with his 5-year-old daughter, Nola.

“What I instill in my daughter is that you have to live and you have to try new things,” he said in the report. “There was no hesitation for me. Being there for my daughter and to support her, it was a go.”

The class has also become a community for Myers and the other dads, which is “powerful and needed” in this day and age. Being soft and vulnerable, as per Myers, is not really a side that people get to see from black men.

“In today’s climate that side of black men doesn’t get seen… Black men who are there to support their daughters and be soft and vulnerable and show a different side,” added Myers. “And it allowed our daughters to look to the left and look to the right and see other dads are out there doing the same things for their daughters. It was so moving and so character-building.”

The father-daughter event proved to be a hit, with more dads calling Lee to ask how they could also join in on the fun. As per the report, E’chappe Dance Arts is now planning to make their annual BOGA class into a monthly class to address the growing interest of dads in dancing ballet with their daughters.  Cody Cepeda /ra

WATCH: Judge carries baby of lawyer mom while swearing her in to state bar