SEVENTEEN World Tour ‘Ode To You’ in Manila

It will be another night of endless “aju nice” for PH Carats. This month of love, SEVENTEEN sets to make their shining return to captivate hearts once again in Manila this 2020!

Prepare for another set of intoxicating stages that will bring you a kind of poison you’d definitely want to have a taste of. PULP Live World is excited to announce that S.Coups, Jeonghan, Joshua, Jun, Hoshi, Wonwoo, Woozi, The8, Mingyu, DK, Seungkwan, Vernon, and Dino will be reuniting with their Filipino fans for the upcoming SEVENTEEN WORLD TOUR ‘ODE TO YOU’ IN MANILA. The show takes place on February 8, 2020 at the Mall of Asia Arena. 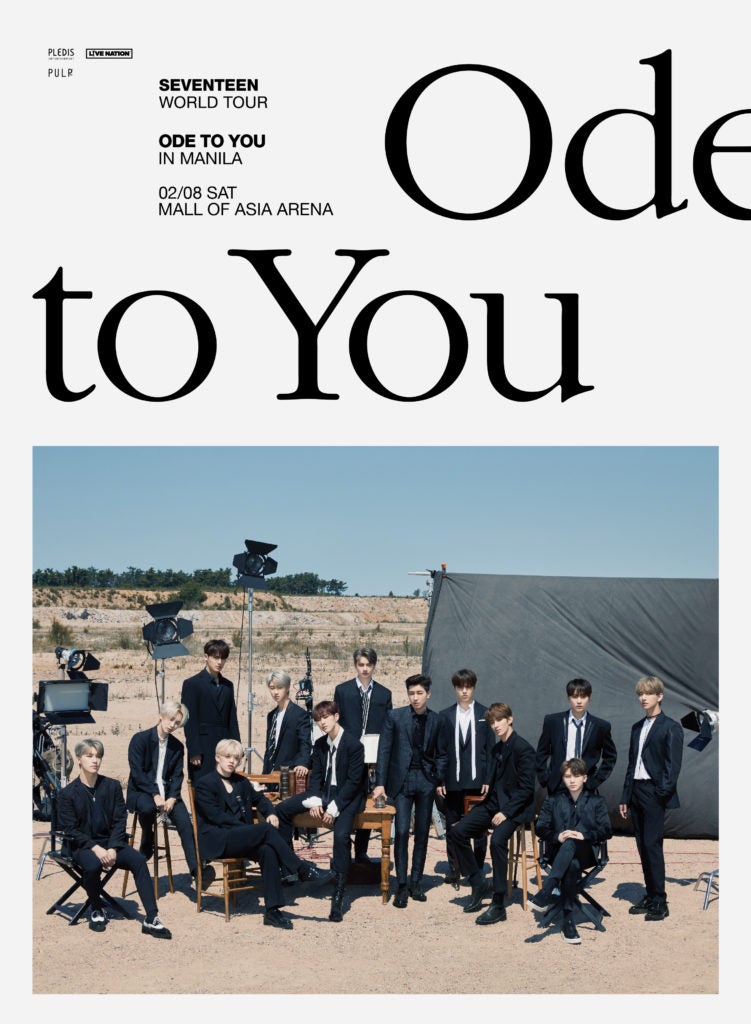 The group recently made their booming return with their third full album An Ode, which conquered music charts upon its release on September 16 and brought in huge accolades back-to-back. Marking a personal best in their career, SEVENTEEN surpassed 160,000 album sales for the album within just 24 hours of its release. With this record-breaking feat, they have tripled the first-day album sales for their previous mini-album YOU MADE MY DAWN.

Moreover, the album quickly surpassed the half-million mark in terms of physical copies sold just five days following its release, counting a massive 640,000 copies sold by the afternoon of September 20.

Other than major domestic music charts and iTunes charts all around the world, An Ode also strongly occupied the number one spot in Japan’s esteemed Oricon chart with approximately 44,000 copies sold in the country alone.

The roaring success of their latest album further heightens the anticipation for their upcoming world tour, where they will get to showcase their new songs up on the live stage. This upcoming tour also marks SEVENTEEN’s third, followingIdeal Cutwhich commenced in 2018.Ideal Cutpreviously brought the boys to eight cities across Asia.

On February 8, 2020 at the Mall of Asia Arena, make sure to give SEVENTEEN the loudest screams and show them the most beautiful ocean of mesmerizing Rose Quartz and Serenity as they serenade their Filipino fans once again at SEVENTEEN WORLD TOUR ‘ODE TO YOU’ IN MANILA, presented by Pledis Entertainment, Live Nation Korea, and PULP Live World.

MOA Arena
Ode to You World Tour
Pulp Live World
SEVENTEEN
SEVENTEEN World Tour 'Ode To You' in Manila
INQPOP! Stories we think you might also like: