The popular anime heroine Sailor Moon is lending her help to the Japanese government to aid in its fight against sexually transmitted diseases (STDs).

Japan’s Ministry of Health, Labor and Welfare teamed up with Okamoto to produce Sailor Moon-themed condoms, as per the Sailor Moon official website via Crunchyroll on Thursday, Oct. 3. 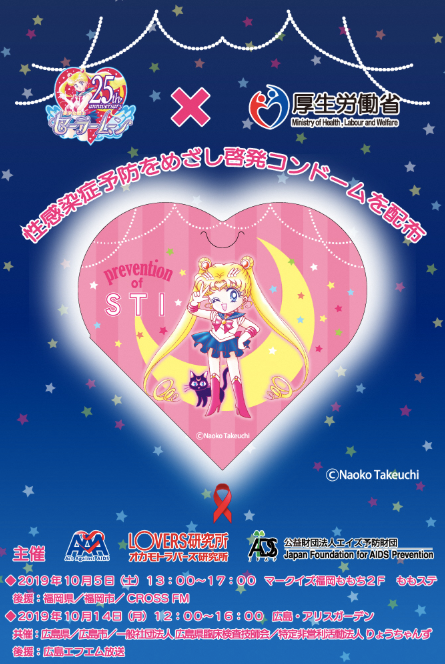 Act Against AIDS and AIDS Prevention Foundation also joined the two groups in the campaign against STDs in Japan. Media outlets Fukuoka CROSS FM and Hiroshima FM Broadcasting will also be assisting the effort.

Sailor Moon and her mentor cat Luna grace the heart-shaped package which the condom is placed in. As per Sora News yesterday, Oct. 6, it is unclear if the condoms would also feature designs of the anime heroine.

The condoms were handed out for free in Fukuoka last Saturday, Oct. 5. Another set will be given away in an upcoming event in Hiroshima on Monday, Oct. 14.

This is not the first time the Japanese government has enlisted the sailor-heroine’s help in the fight against STDs. Sailor Moon designs were also printed on around 60,000 condoms in 2016, to help the said government combat syphilis and other STDs.

Aside from the Sailor Moon condoms, Okomato also launched a line of condoms with Japan’s traditional Ukiyo-e woodblock paintings printed on them earlier this June. JB

Condoms made in China too small, says Zimbabwe health minister