‘Friends’ gets Google search tribute for its 25th anniversary

The beloved comedy series “Friends” has taken over Google pages after the search engine dropped in Easter eggs for fans on the show’s 25th anniversary.

“Friends” premiered on Sept. 22, 1994, and is arguably the most iconic show of its generation, spanning a total of 10 seasons and making its stars household names.

In light of the show’s anniversary, Google pays tribute to the six friends and their individual quirks.

Search “Rachel Green” and on the sidebar of her profile is a drawing of her well-known and much-imitated layered haircut. Click it and it leads to a Google Image search of “The Rachel.”

Type in “Phoebe Buffay” on the search bar and click on the guitar in her profile. You will hear Phoebe’s infamous song “Smelly Cat” along with an animated smelly cat walking on the screen.

Searching “Ross Geller” has a twist—or rather, a pivot, in memory of the time he was too cheap to pay for the delivery of his couch. Clicking the icon of a couch on his profile makes the entire Google page pivot, along with his voice yelling “Pivot!”

Besides the characters, another Easter egg comes up when you google “Friends glossary.” The show’s expansive vocabulary, ranging from “mississipily” to “transponster,” is featured at the top of the page, along with a brief description and example of the word. 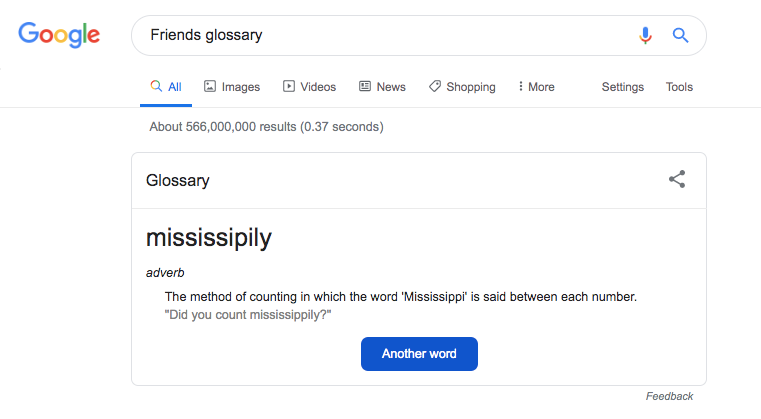