Follow us:
Martina Caruso, "Signum" restaurant chef, poses outdoor in her restaurant in Salina, one of the Eolian Sicilian islands in Italy, on July 22, 2019. Image: AFP/Catherine Marciano

Award-winning young Italian chef Martina Caruso’s love of food is in her blood, and she has the tattoos to prove it.

At just 29, Caruso has become a hit in the world of haute cuisine by using the sunshine flavors of her tiny volcanic island of Salina and giving a modern twist to traditional recipes. 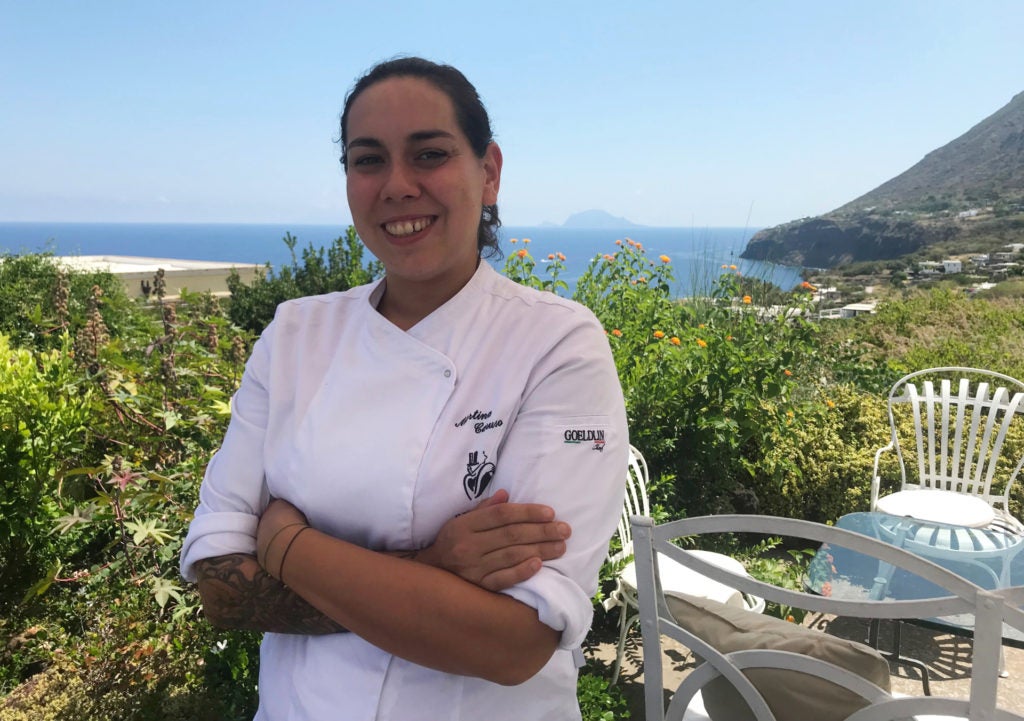 Martina Caruso, “Signum” restaurant chef, poses outdoor in her restaurant in Salina, one of the Eolian Sicilian islands, on July 22, 2019. Image: AFP/Catherine Marciano

Earlier this year, she was named Italy’s female chef of 2019, just three years after she became the youngest Italian to win a Michelin star at the family-run Signum restaurant and hotel on Salina.

The flavors from the idyllic island infuse Caruso’s dishes and her favorite ingredients are even tattooed on her arm: garlic, oil, hot pepper, octopus and the sea.

From a young age, she watched her father Michele, who as Signum’s chef was devoted to traditional recipes.

“At first, my father did not give me any room, he did not want me to become a chef, a tiring job,” Caruso says.

But she flew the nest for three years to train at a cookery school near Sicily’s capital Palermo.

Caruso later took her place as a chef in the family restaurant, where she showed off her technical and creative ways of cooking.

“I convinced my father by showing him what I knew how to do.”

Her mantra is “simplicity,” says Caruso, who was awarded the female chef of the year title by the Italian Michelin guide and Veuve Clicquot in March.

“But simple does not mean it is easy,” she laughs.

In one of her appetizers, Caruso takes “bagna cauda,” a typical dish from Piedmont in northern Italy, which consists of garlic and anchovies, but gives it a Sicilian kick by using sea urchins.

Salina is known for its capers, which she makes into ice cream, something to be savored in small quantities due to the potent flavor of the tiny green berries.

Her menu also includes chargrilled moray eel, which she cooks on embers in her garden. The delicate white fish is scarcely eaten on the island today but she is keen to continue using the traditional ingredient.

Boils down to ‘home cooking’

Another local specialty is her “mezzi paccheri,” short tube-shaped pasta with an intense squid sauce, based on a recipe made by fishermen’s families.

“French cuisine is very much based on technique, the marriage of flavors. To think up a dish, Italian chefs may be more traditional, and that is what I do by listening to the country’s elders,” Caruso says.

However, Caruso’s mother, Clara, the mayor of the small town of Malfa, has never even cooked an egg.

Instead of the kitchen, Clara turned her attention over the course of 30 years to transform a number of old pastel-colored properties into what has become a boutique hotel in Salina, an island of just 26 square kilometers (10 square miles).

She has also tried to increase tourism on the island by inviting artists into a former palace that has been turned into a cultural center.

Salina was featured on the silver screen in the film “Il Postino”, which was shot there 25 years ago. The classic is screened every day during the summer at an outdoor cafe on the island.

At the restaurant, Caruso’s father Michele still takes care of ingredients in the early morning and her brother Luca works as a manager.

“We try to make the young people of the island work,” she says. “My father was taught by his mother. In Italy, the cuisine of ‘the mamma,’ home cooking, is fundamental.”

The feminine cult in the kitchen can be seen in a large number of Italian women who have been distinguished by Michelin awards.

For Caruso, the Michelin title is “an important moment” in terms of her image, but it also gives her a pretext to talk about being a woman working in haute cuisine.

She makes sure she works with a diverse team.

Her rise to fame has not prompted her to leave the island, whose population goes down to just 2,000 in the winter.

“I can explore the world in the winter, but I will not leave Salina, it is home,” she says. HM/JB