Fans of K-drama will swoon all over again with the line-up from Netflix’s ensemble of Hallyu’s best content this summer and fall seasons!

“There’s just so much love for Korean content in this region, especially in Southeast Asia, Hong Kong and Taiwan. Netflix started adding Korean titles three years ago and we’ve seen how that has attracted new audiences who are discovering the Netflix viewing experience for their k-drama viewing,” said Minyoung Kim, Director of Content, Korea, Netflix. “Fan favorites like Korean Odyssey, Something in the Rain, What’s Wrong with Secretary Kim are all part of our growing library and today, we are pleased to be working with Korean talent and creators on the second season of original titles like Kingdom and My First First Love.” 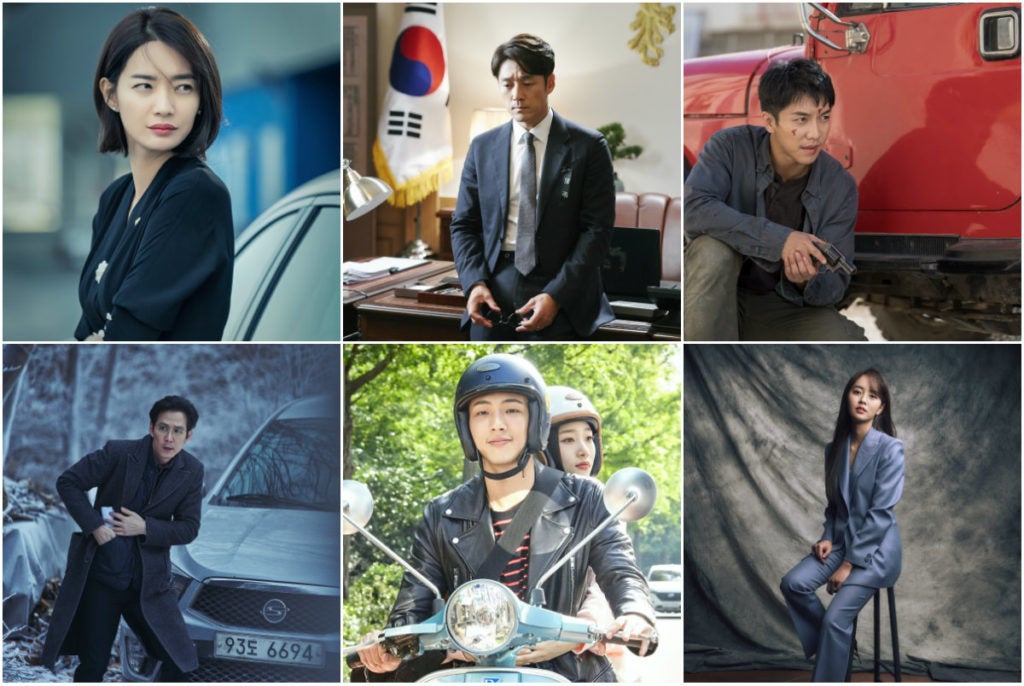 Since 2018, Netflix’s library of Korean content is a growing library of popular romantic comedies like Romance Is A Bonus Book to thrillers like Memories of the Alhambra. In 2019, Netflix’s new original Korean original films and drama continues to ramp up with hits like Abyss, Arthdal Chronicles and One Spring Night – all of which are exclusively available to Netflix members in the Philippines.

There’s no time like now for fans to refresh their watch-list as Netflix is bringing a host of new Korean original titles. Our six picks cover a variety of stories and genres including drama, sci-fi, thriller, horror, comedy and romance:

Svaha is a mystery thriller, starring veteran actor Lee Jung-jae (Along With the Gods: The Two Worlds, Along With the Gods: The Last 49 Days) and up-and-coming actor Park Jung-min, best known for his performance in the indie film Bleak Night and Dongju: The Portrait of a Poet. The film is a tapestry of subplots woven like a puzzle with Pastor Park, (played by Lee Jung-Jae) hired to expose a religious cult. He learns of a young girl’s murder whose body was found following a tunnel accident and starts to connect the pieces to his investigation. Unfolding in parallel, the obsession of another young girl Geum-hwa by religious fanatic Na-han (played by Park Jung-min) slowly builds a mystery that rattles and confuses Pastor Park. 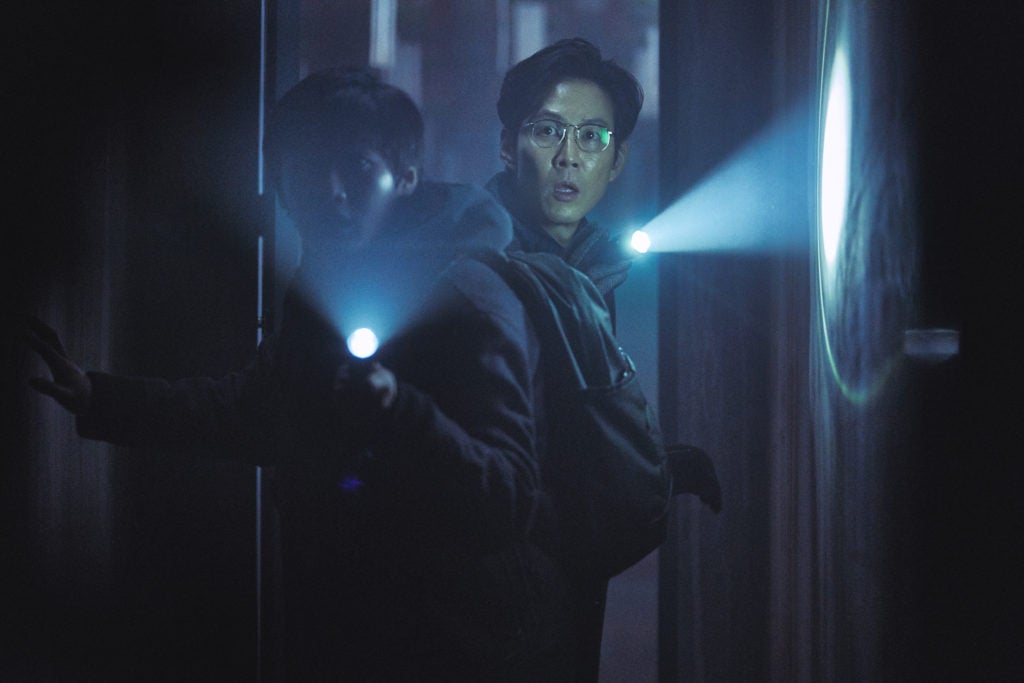 Svaha is written and directed by Jang Jae-hyun, known for the hit supernatural thriller The Priests (2015) that sold over 5.4 million tickets at the box office in Korea.

Geum-hwa is gazing into space, with fear in her eyes. Pastor Park is being commissioned to look into a new cult group. Na-han, looking entirely emotionless, is chasing Geum-hwa. He recites a dark spell at the end.

Chief of Staff is a drama series about the world of political aides who are normally outside the spotlight. It portrays aides as the real players in politics, whose desire for power can sometimes be stronger than that of the lawmakers they serve. 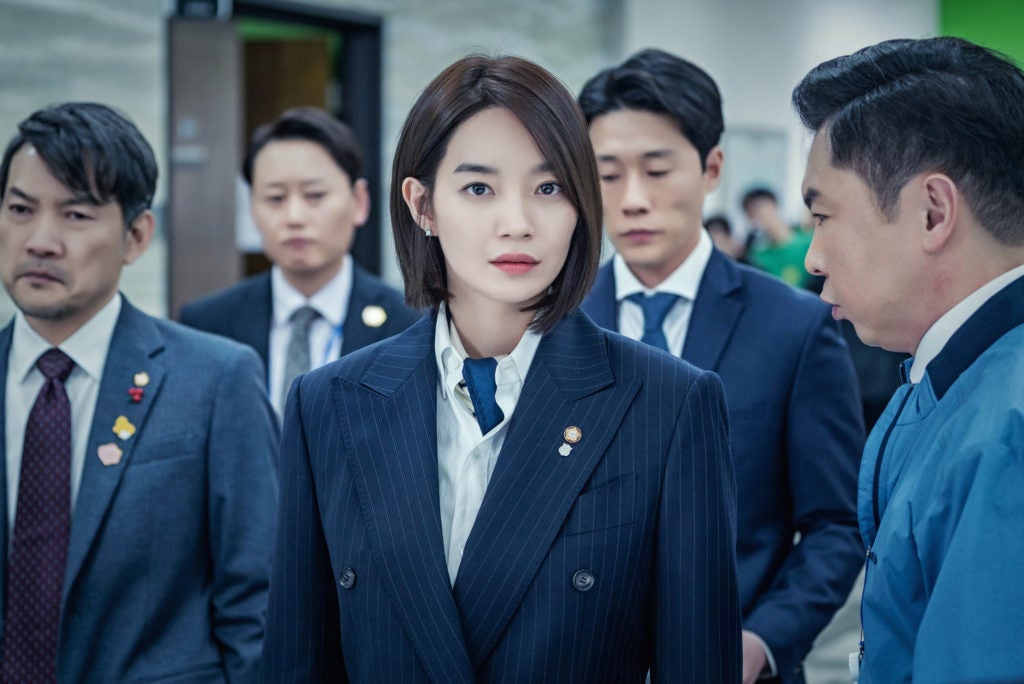 Jang Tae-jun, played by Lee Jung-jae, is the chief of staff to a four-term lawmaker. He graduated at the top of his class from the police academy, but he did not want to be a police lieutenant. As Chief of Staff, Jang is excellent at everything he does. He makes the impossible possible. If it were not for Jang’s persistent intuition and cool judgment, the lawmaker could not have become the floor leader of his party. Jang would not stop there, though. The bigger dreams he has are hidden in his soft smile.

Kang Seon-yeong, played by Shin Min-ah (Oh My Venus, My Girlfriend Is a Nine-tailed Fox), is a lawyer-turned-politician, serving as the spokesperson for her party. Kang is resolute and gentle, and always carries herself with confidence and strong determination. The fact that she became a lawmaker by proportional representation challenges her future in politics at times, but she is not swayed by what others think, nor gives up because she fears. 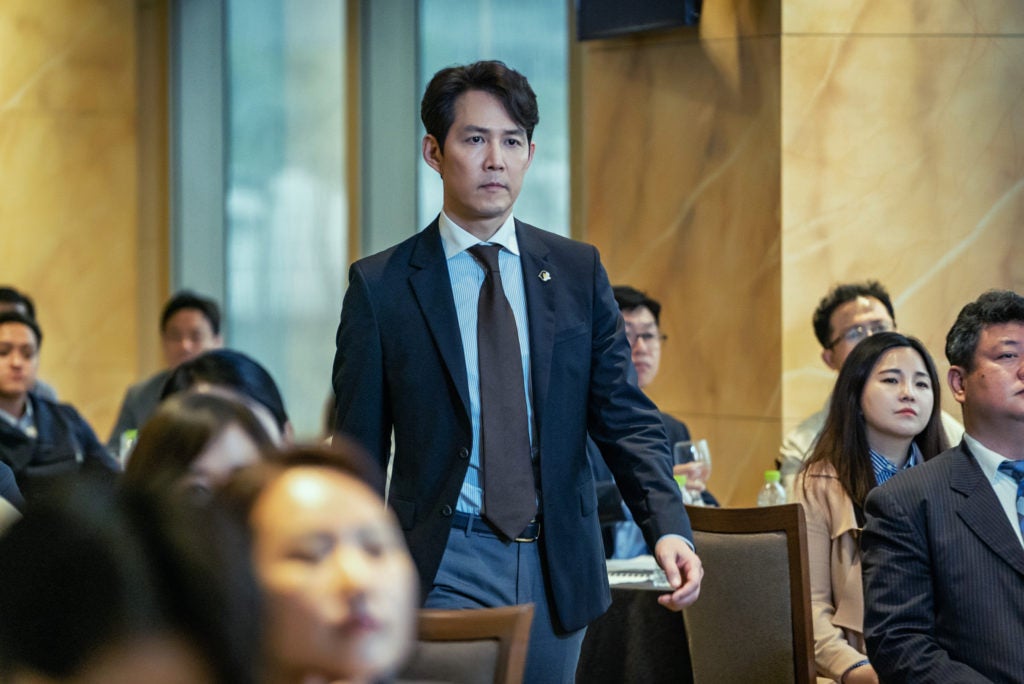 Chief of Staff is directed by Kwak Jung-hwan (Ms. Hammurabi, THE K2, The Slave Hunters) and written by Lee Dae-il (Life on Mars, Bring It On, Ghost).

Designated Survivor: 60 Days is a story of a politician, who ascends from the position of Minister of Environment to President, as an explosion at the National Assembly kills everyone in the Cabinet who is ahead of him in terms of the presidential succession. 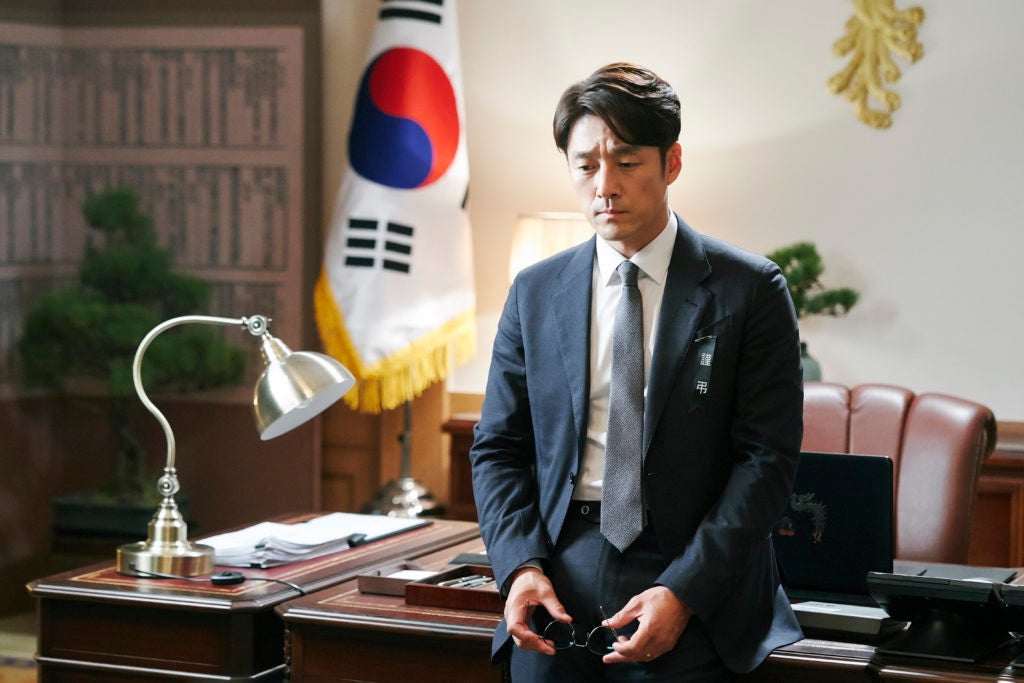 Park Mu-jin, played by actor Ji Jin-hee from the popular TV series Daejanggeum or Jewel in the Palace, is a scientist-turned-politician who struggles to fit in politics. Park is the acting president for 60 days, and during this period, albeit inexperienced and unwilling, he tries to uncover the truth behind the attack.

Lee Joon-hyuk, best known for his performance in the highly-praised TV series Stranger, plays an independent lawmaker, Oh Young-seok, who is not only charming but also full of confidence and young energy, which comes off as a stark contrast to Park.

A new character has been added to Designated Survivor: 60 Days. Han Ju-seung, the Chief Presidential Secretary, is played by Heo Joon-ho whom Netflix fans will recognize from the first season of Kingdom. Han is very calm and composed, and tends to draw a clear line between private and public matters, which in turn creates tension between him and Park.

Designated Survivor: 60 Days is written by Kim Tae-hee who is known for the beloved TV series Sungkyunkwan Scandal, and is directed by Yoo Jong-seon, whose filmography includes What’s Wrong with Secretary Kim and Descendants of the Sun.

Passengers on the train are looking out the window intensely as they see smog and flame coming from where the National Assembly building is presumably located. 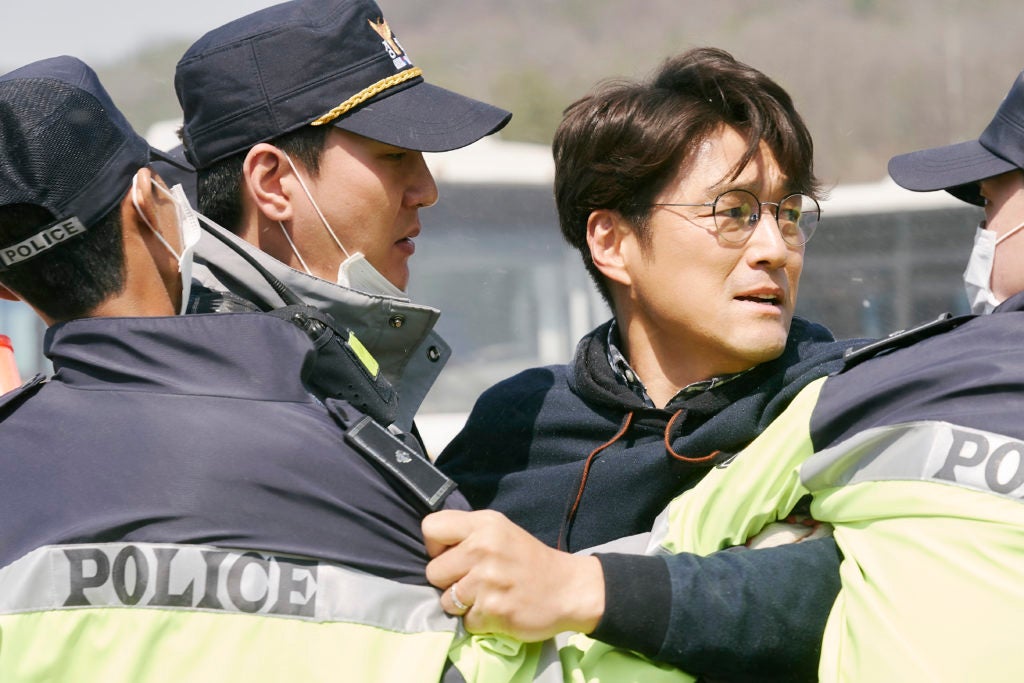 Minister Park by chance witnesses the unprecedented bombing on a road very close to the scene. He is in shock, but comes to sense quickly and starts running toward the site. The building helplessly collapses, burned to ashes, leaving everyone feeling hopeless.

Netflix Korean original series, My First First Love, directed by Oh Jin-seok, is launching a second season on July 26, which in fact marks the 100th day since the first season premiered in April. 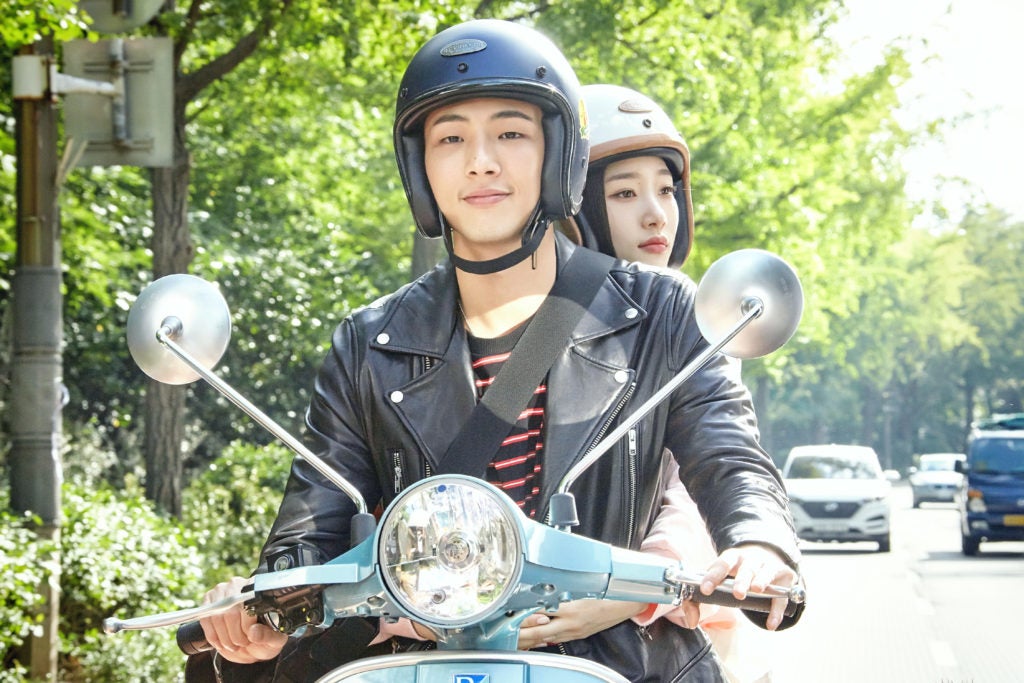 The new season launch was also announced by the five main cast, namely Jisoo, Jung Chae-yeon, Jinyoung, Kang Tae-oh, and Choi Ri, on their respective social channels. Each member took a selfie video with greetings to the fans.

The upcoming season of My First First Love will continue to portray how the five characters grow as young adults. The love triangle involving Tae-o, Song-i and Do-hyeon will put them in a spot where they would need to figure things out between friendship and love. Hun and Ga-rin, meanwhile, take one step closer to their career dreams.

Love Alarm is a Netflix original series, set to launch in the third quarter of this year. It is a story of friends who find themselves caught in between what they truly desire and what a mobile app says they would want. The app is designed to send an “alarm” when someone who has romantic feelings for you comes within a 10-meter radius.

Kim Jo-jo, played by Kim So-hyun (Who Are You: School 2015, Hey Ghost, Let’s Fight, Radio Romance) is a girl with positive spirit despite some painful family history, and she finds a new love by using the app. Hwang Sun-oh, played by a new face Song Kang, likes Jo-jo, and he has it all. He has the look of a model and grew up in a rich family. Lee Hye-yeong, played by another rookie actor Jung Ga-ram, is good friends with Sun-oh, and he also likes Jo-jo, even before Sun-oh.

Love Alarm is based on a popular Korean webtoon of the same title by Chon Kye-young, whose other works like Unplugged Boy and Audition have a strong following in Korea.

Vagabond is an action-packed Korean espionage drama series, starring Lee Seung-gi (The King 2 Hearts, A Korean Odyssey) and Bae Suzy (Architecture 101, While You Were Sleeping).

It is a story about a stuntman Cha Dal-geon, played by Lee Seung-gi, who gets involved in a tragic airplane crash and ends up discovering a national corruption scandal in the process. Bae Suzy plays Go Hae-ri, the oldest daughter of a deceased marine, who decides to work for the National Intelligence Service as a secret ops agent in order to support her mom and younger siblings, although she had rather hoped for a simpler life, being an ordinary civil servant. 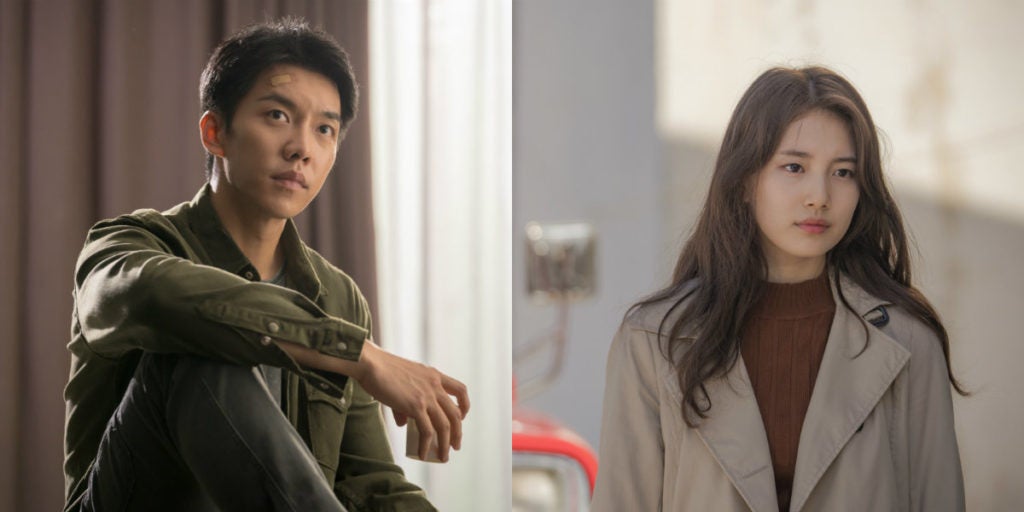 Vagabond is Lee and Bae’s second time playing opposite each other since their leading roles in Gu Family Book premiered in 2013. Before acting, the two were also famous for their singing career. Lee Seung-gi has numerous hit songs that earned him the title ‘ballad prince,’ while Bae Suzy, whose stage name is Suzy, was a member of the K-pop girl group, Miss A.

Vagabond boasts some spectacular filming locations outside Korea, such as Lisbon, Portugal and a few spots throughout Morocco. Its production quality is also top notch, packed with detailed cinematic action scenes and impressive VFX.

The series is directed by Yoo In-shik (Mrs. Cop, Romantic Doctor Teacher Kim) and co-written by Jang Young-chul and Jung Kyung-soon, and this is the trio’s fourth collaboration to date. 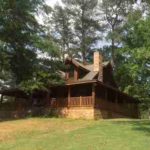 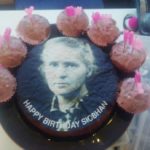