Follow us:
Jacqueline van Maarsen, center left, and Albert Gomes de Mesquita, center right, school friends of Anne Frank, pose for a photo with students from the International School of Amsterdam during an event to mark what would have been Anne Frank's 90th birthday, in Amsterdam on Wednesday, June 12, 2019. On the day Anne Frank would have turned 90, the museum dedicated to keeping alive her story has brought together schoolchildren and two of the Jewish diarist's friends at the apartment where she lived with her family before going into hiding from Nazis who occupied the Netherlands during World War II. (AP Photo/Michael C. Corder)

For Jacqueline van Maarsen, attending Anne Frank’s 13th birthday party in 1942 was a welcome distraction from the grim reality of life in Nazi-occupied Amsterdam during World War II.

Enjoying movies and cookies at Anne’s apartment meant “we didn’t think about it at that moment,” the 90-year-old Van Maarsen said Wednesday, June 12, as she and another of Anne’s friends met students from Amsterdam schools at an event to mark what would have been Anne’s 90th birthday. 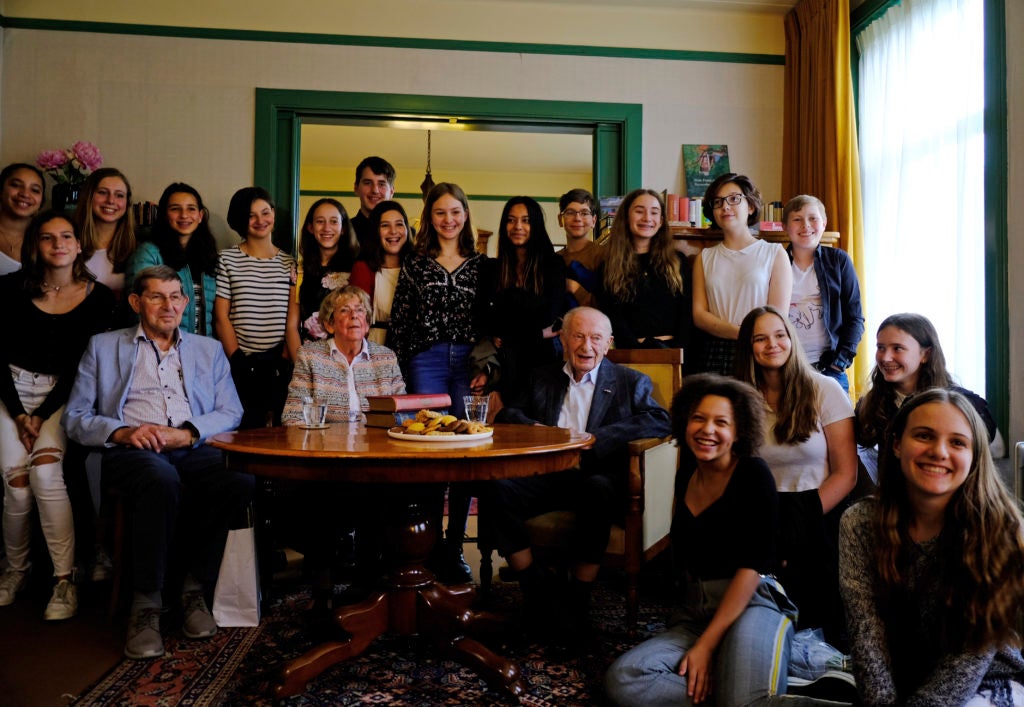 Jacqueline van Maarsen, center left, and Albert Gomes de Mesquita, center right, school friends of Anne Frank, pose for a photo with students from the International School of Amsterdam during an event to mark what would have been Anne Frank’s 90th birthday, in Amsterdam on June 12. Image: AP/Michael C. Corder

The 13th birthday party was a fleeting relief for children already suffering from discriminatory, anti-Jewish regulations and forced to wear Star of David patches on their clothes.

Just three weeks later, Anne and her family fled into hiding in the secret annex behind a canal-side house that was made famous in her diary. Less than three years after that, exhausted and suffering from typhus, Anne died with her sister in the Bergen-Belsen Nazi concentration camp in February 1945.

Wednesday’s meeting was at the Frank family’s former apartment in southern Amsterdam, where they lived before going into hiding.

They hid in the annex for just over two years before being arrested and deported to Nazi-run concentration camps. Anne’s father Otto, the only member of the family to survive the war, later published her diaries. The book went on to be published in dozens of countries around the world and is regarded as one of the most important works of the 20th century.

It was on her 13th birthday that Anne received her first red checkered diary, calling it “maybe one of my nicest presents.” A similar diary was laid on a table along with other gifts — a blue blouse, cold cream, a book, that she described receiving on her birthday.

Like Anne, with whom he attended Amsterdam’s Jewish Lyceum, Albert Gomes de Mesquita, 89, also went into hiding. Unlike the Franks, he moved around the country from one hiding place to another as he dodged arrest and deportation.

Asked what lessons he would pass on to the youth of today, he told students from the International School of Amsterdam: “I think you have to learn things from what happens. I’ve been helped by so many different people and they were Roman Catholic, Protestant, atheist, communist, rich, poor,” he said.

“I’ve slept in 12 different places during hiding and my lesson is: Good people can be found everywhere.”

Squeezed into the living room of the apartment, which has been painstakingly restored so that it looks like it would have when the Frank’s lived there, the students listened intently and peppered Van Maarsen and Gomes de Mesquita with questions.

“It was really incredible to meet them, not only as Anne’s friends but as survivors of the war,” said 13-year-old Sietse Munting.

He was moved by Van Maarsen saying that she sometimes felt like she lost her identity because she was labeled as Anne’s friend.

“I really tried to think about that and tried to think; ‘it’s not only Anne,’ he said. “Sure, we remember Anne because she’s very important — and we should remember her — but there were also many, many others who also faced this time.”

The apartment is now owned by the Anne Frank Museum, but unlike the secret annex, is not open to the public. Fittingly, it is used by a Dutch literature fund to house writers who fear persecution in their own home countries. The current resident is a Kurdish poet and translator, Kawa Nemir, who just finished translating James Joyce’s epic Ulysses into Kurdish.

Van Maarsen, who has written about her friendship with Anne, recalled their “very good and special friendship” that will always endure in her memory.

“I couldn’t forget her because she got so famous,” she said. RGA/JB