A band called The Maine is on tour!

PULP Live World is proud to announce that our friends from The Maine will be returning to Manila for their first SOLO show in the country since 2012! The Maine Live in Manila 2019 is happening on September 14, 2019 at the New Frontier Theater.

Since the band’s first solo concert in 2012, also powered by PULP Live World, The Maine has consistently been playing shows for their Filipino fans. Twice they’ve been part of the Bazooka Rocks Festival (Bazooka Rocks I in 2012 and Bazooka Rocks V: A Pop Punk Weekend in 2017). In 2014, they brought their 8123 Tour to Manila, playing alongside This Century and Nick Santino, and in 2015 they shared the stage with All Time Low. 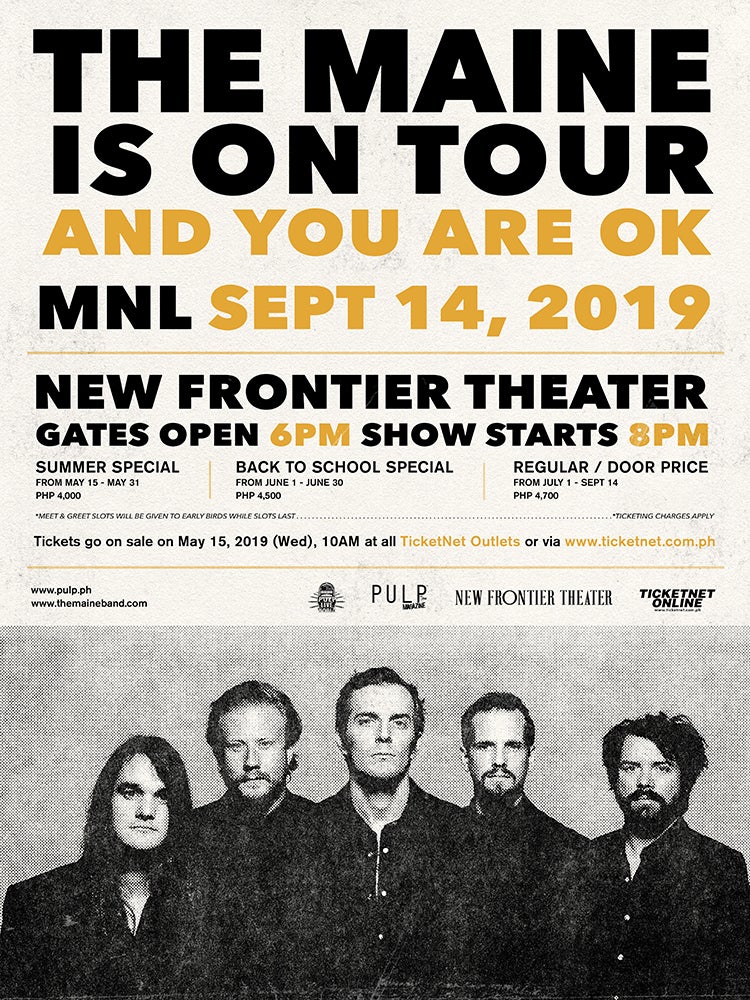 The more they came here, the more their community of Filipino fans grew. This year, following their memorable show in Manila during the Lovely Little Lonely era, The Maine are excited to play us new tunes from their best album yet.

“This is us in our most ambitious form to date. This is us at breakneck speed. This is us in a television show starring Mandy Moore. This is us, for the first time, fully realizing a vision that we had from conception to finished product. All hype aside, this is us making music, putting everything into it, and holding our heads up higher than we ever have before,” says vocalist John O’Callaghan of their latest release. Listening to tracks like “Numb Without You,” “Broken Parts,” and “My Best Habit,” it’s exciting that we will soon witness The Maine in their best era yet.

You Are OK, the Arizona crew’s seventh studio album, was released independently last March 29, 2019. Widely well-received by fans, You Are OK shot to the top of the Billboard Independent Albums Chart—a momentous first for The Maine, a band that has always been supported by a community that feels more like a family than just a fanbase. And their Filipino fans have always been part of this beautiful family.

Tickets to The Maine Live in Manila 2019, happening on September 14, 2019 at the New Frontier Theater, are priced as follows:

Tickets go on sale on May 15, 2019 at 10AM at TicketNet outlets and online (www.ticketnet.com.ph). Ticketing charges apply.

Manila, you are OK. And if you’re not right now, you will be soon.

Manila You Are OK. The Maine Live in Manila 2019
New Frontier Theater
Pulp Live World
the maine
You Are Ok Tour
INQPOP! Stories we think you might also like: