LYON, France — It has for decades been the dream of the young and the young-at-heart to be like Luke Skywalker from Star Wars and vanquish foes with a lightsaber.

And now, in France at least, the dream can come true and the force be with you after the French Fencing Federation registered lightsaber as an official sport. 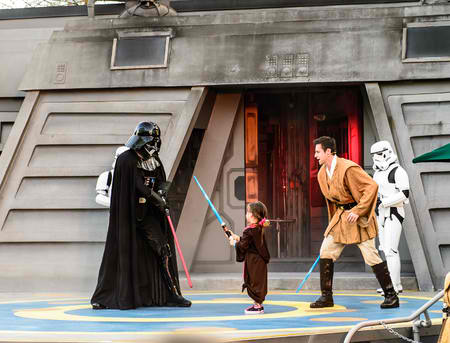 Fencing already has three very different weapons — foil, epee and sabre — which are disciplines up to Olympic level.

But now the lightsaber offers a fourth, which the national fencing authorities hope will win new converts to the sport.

“When the world of fiction transforms into sport, it can only be positive,” said Olivier Hanicotte, head of the lightsaber project at French Fencing Federation.

He said the idea first came from the United States in 2013-2014 before becoming popular in French fencing halls.

“Then the federation took over to secure and regulate it, because at one point, there were a lot of security concerns with people not necessarily wearing masks or protection,” he said.

The federation has even created its own lightsaber academy to structure training, organize competitions and ensure safety.

Hanicotte said the idea was not to find a novel way to attract people to traditional fencing but to develop a specific sport.

The strategy seems to have paid off — in just two years, the number of participants counted by the federation has quadrupled, with some 1,200 people now training in 92 clubs.

On a Friday evening, the lightsaber session at a fencing hall in Lyon is so popular that instructor Mathieu Dhennin, 32, has had to turn people away.

“The people in my classes range from children of 10 to adults aged 40 to 50 who have been fans of Star Wars from the very first film,” he said.

Some dress up in costume with a few in the full garb of Darth Vader.

“I’ve come dressed up a few times but it’s not compulsory. You can come in a tracksuit. It’s easier but it’s less immersive,” said participant Gauthier Alfonsi.

In order to formalize the new sport, the federation has created four different disciplines:

“The moves we use with lightsabers are very close to those used in fencing but there are also moves which are borrowed from other combat sports,” said Dhennin, who founded the Lyon lightsaber academy.

Despite some similarities with fencing, the aim was quite different, Hanicotte said.

“There are a certain number of moves that obviously resemble sport fencing, but we’ve organized them in a convention that allows for us to get nearer to the universe imagined by fans,” he said. RGA/JB