At some point in our life, we wished we were young again. Castles, fairies, superpowers, talking animals – these were childhood for most of us, if not all. That is why the UP Engineering Student Council together with Mineski Infinity, Diligence Café, Head and Shoulders and C500 Juice Drink launched this year’s Engineering Opening Week entitled Ever After with fun Disney-inspired activities that brought students and everyone young at heart back to the time.

The Piston Cup: Sportsfest kickstarted the Engineering Opening Week with shouts and cheers as athletes from the eight different departments and institutes battled it off to win the title as this year’s Engineering Sportsfest Champion! Sports such as basketball, volleyball, football and e-games were enjoyed by the players and sports enthusiasts alike! Who said Engineering is all about the books? For most days throughout the week, Save The Day: Service and NGO Booths were present to save the students and staff who needed their services ASAP! Booths included PhilHealth, PhilPost, PAG-IBIG, PSA, CCAP, CARA Welfare Philippines, Unionbank (EON), Mineski, and Encarnacion Salon who offered discounted haircutting services for hair donors. For the Disney fans, a screening of most loved Disney films like Mulan and Moana were made available for free at the Engineering Theatre.

Exceeding Limits: Academic Fair happened simultaneously, featuring different companies and organizations who offer academic services such as scholarships, study grants, study hubs and the like. Those present were Campus France Manila, Embassy of Japan, Childhope Philippines, Earth Island Institute, UP Office of Scholarships and Student Services, Daniw Study Center, College Edge (Lauan University Center), Satoshi Citadel Industries, Grimalkin and Denso. These companies and organizations, aside from setting up booths, also gave talks to give more information and insights on their services to interested students and faculty.

On the third day, Meeska Mouska: Organization Fair was opened along Osmena Avenue inside the UP Diliman Campus. Students, most especially the freshmen, visited the booths of almost 30 Engineering-based organizations to play games, win prizes and get to know the different organizations they can be part of in their stay in the college. This is definitely one of the highlights of this year’s Opening Week!

The following night, talents were showcased at the Seize Your Moment: Talent Show! The freshies and invited guests sang, danced and played instruments showing that the college is indeed composed not only of smart but also talented individuals! Prizes were given to the top three performers. On the second to the last day, Escape the Rabbit Hole: Breakout session was opened the whole day. Inspired by Alice and Wonderland, this is a game wherein players had to do challenges and answer puzzles to reach the end and escape the rabbit hole. Once you come out successful, a prize surely awaits! 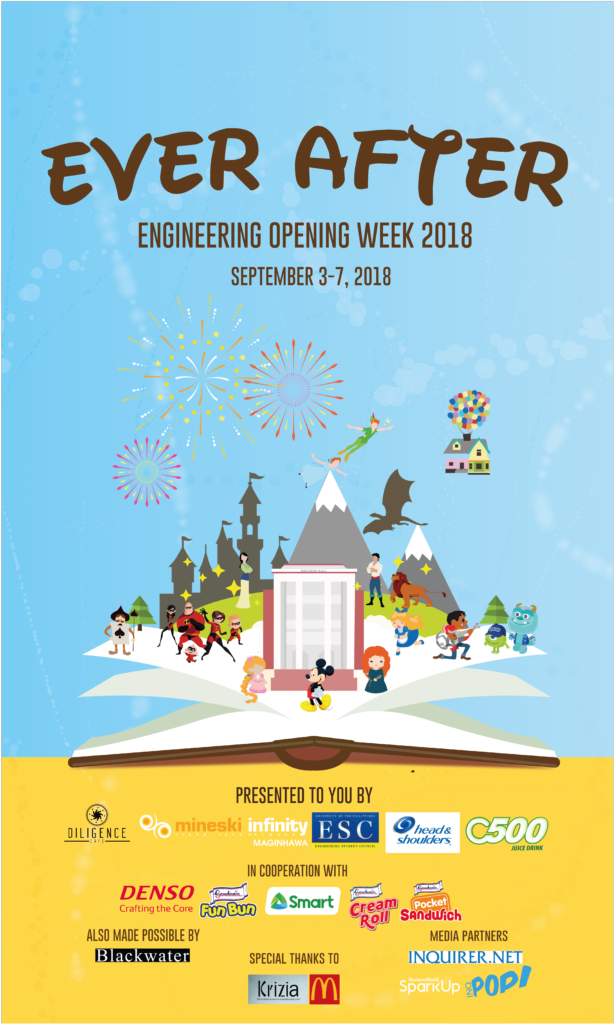 And as it is in every Disney movie, there is an ending that will surely captivate the hearts of its viewers. The Engineering Opening Week 2018 ended with Unto Neverland: Culmination Night wherein the sportsfest winners and freshie bloc tasks winners were awarded. After the short program, games, food, and free-flowing drinks were enjoyed by freshies and upperclassmen alike. It was definitely a great way to end the celebration!