Remember when Pokémon Go was first released and everyone was out walking with their smartphones, trying to catch all the Pokémons to become a master trainer? You’d see almost everyone in the streets playing the augmented reality (AR) game, meeting new people at several designated Pokéspots, or gaining enemies after tournaments.

Everyone tried to up their game to become a master trainer but nobody has gone too far like this 70-year-old grandpa from Taiwan who’s determined to catch them all.

Chen San Yuan, popularly known as “Uncle Pokémon”, has mastered the phenomenal game by playing it on, not just one, but 11 mobile phones attached to his bike. His customized bike rigged with 11 devices attracts not just the Pokémons in the AR world but also passersby in the real world. And despite having 11 different screens to manage all at the same time, Chen proves he’s a master of this game at 70. Talk about being a pro! 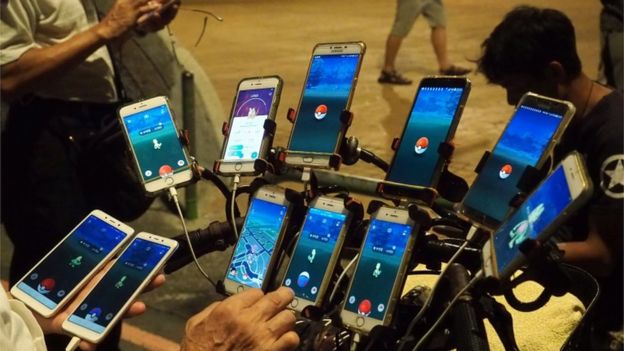 According to BBC, Chen learned about Pokémon Go through his grandson and claims he can play for 20 hours straight until his devices runs out of power. Several battery packs are also attached to his bike to keep him going throughout the day. Redditors commented that maybe the hardcore grandpa has a Voltorb attached to his phones, supplying him long battery lives… or even better, a USBikachu!

Chen spends $1,290 a month but he surely have no plans on quitting this immensely addicting game. In fact, he said in an interview that he’s planning to add a few more devices and bring 15 smartphones with him as he wander off the city looking for virtual monsters.

He shared that playing Pokémon Go has helped him make friends and fend off his Alzheimer’s disease. Chen is now also hailed as a “shifu” (master) and even a god!

WATCH: Artist reimagines what happens when you leave your Pokémon unattended