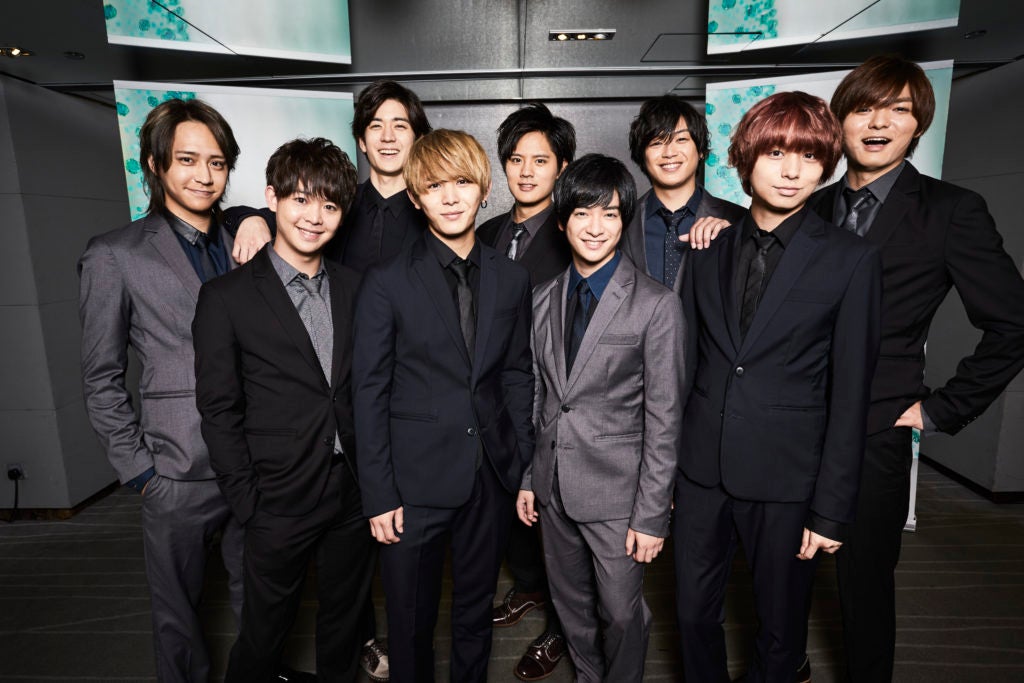 Comprised of Ryosuke Yamada, Yuri Chinen, Yuto Nakajima, Keito Okamoto, Daiki Arioka, Yuya Takaki, Kei Inoo, Hikaru Yaotome, and Kota Yabu, the band has been together for ten years and has sold over 2M copies of their album in Japan alone.

During an exclusive group interview with other members of international media, Hey! Say! JUMP talked about music, soccer, their future plans, their love for their fans, and even Hong Kong fried noodles.

On being together for 10 years and their plans moving forward
Since the band has been together for a decade now, they have all gone through different changes (and even joked about how Nakajima-san grew a foot taller since then), but they don’t seem to mind that at all. In fact, if there’s anything that they would tell themselves ten years prior, it would be these words: “These members would become very important people in your life from this point onwards.”

These boys enjoy two things: football (they watched the Japan vs Belgium World Cup match together) and Hong Kong fried noodles. Though there’s a lot of fried noodles in Japan, they admitted that enjoy the unique taste of the one in Hong Kong.

When asked what are their plans since Okamoto-san will go to the US to pursue further studies, the other members said that they will work harder and improve themselves so that they’d have become better individuals and musicians by the time he returns.

Although there are no concrete plans yet, Hey! Say! JUMP also expressed their desire to do an Asian Tour soon and would love to meet their fans from the Philippines, Singapore, and Indonesia. (Trivia: Okamoto-san came to Manila when he was 18 years old. He visited his best friend in high school who’s from the Philippines).

On music and doing live performances
The band shared that they would often form a circle, put their hands on top of each other and shout a cheer before they perform live. But during rehearsals, they would usually take videos of themselves and then review it. This is how they improve their performances and make it better each time.

Apparently, playing live for them is the most important part of being a musician. Okamoto-san said that the reason that they became musicians was to perform live before their fans. They also believe that the songs they sing to their audience will grow into something better once it reaches them.

On their love and appreciation for their fans
If there’s one thing that the boys kept repeating, it was how grateful they are for the support they continually receive from their fans in Japan and all over Asia. Being connected with them through performing live has always given the band great delight and they always look forward to interacting with them. Hey! Say! JUMP also shared that their greatest achievement is to be able to reach out to different people from diverse culture and languages through their music.

Fans of #HeySayJUMP, are you ready? The members will be answering questions submitted by YOU in their first-ever Facebook live stream, right here on our Facebook page! Remember to like and follow us if you’ve yet to do so for the latest updates and more exclusive coverage! #GEMxHSJCatch the LIVE broadcast of ‘#THEMUSICDAY Songs for You’ on Jul 7 from 4.40PM (3.40PM JKT/BKK), only on GEM!GEM is your destination for the best of Japanese entertainment. Find out where to watch GEM: www.GEMtvasia.com/getGEM!

—
Check out GEM TV Asia’s page for more updates and learn how you can subscribe to GEM here.