Year after year, the noise behind the self-referential Fête de la Musique just seems to get more and more resonant, the building up of the music festival eliciting a sense of anticipation and elation from nth-timers, and slight apprehension from the nonconverted. While music fêtes are demonstrated through busking in the manifold streets of France, such is a concept yet to be made popular in the Philippines. But since the mere idea of performing in the street runs one the risk of being nabbed as a tambay nowadays, busking ought to take the backseat and let the performances manifest, for now, in the dimly-lit world of bars, speakeasies, and third wave coffee shops.

This year saw the annual fête with 39 stages, a feat that may or may not have impelled most of its overexcited goers to take on the lofty undertaking of seeing every stage. But stage hopping around the entirety of Makati only sounds nice in theory.  The price of gas is lamentable, Grab fares aren’t getting any lower, and the rain reserves no empathy for anybody looking for a good time, compelling some to choose niche stages to spend the night away rather than embark on a musical pilgrimage around the city. 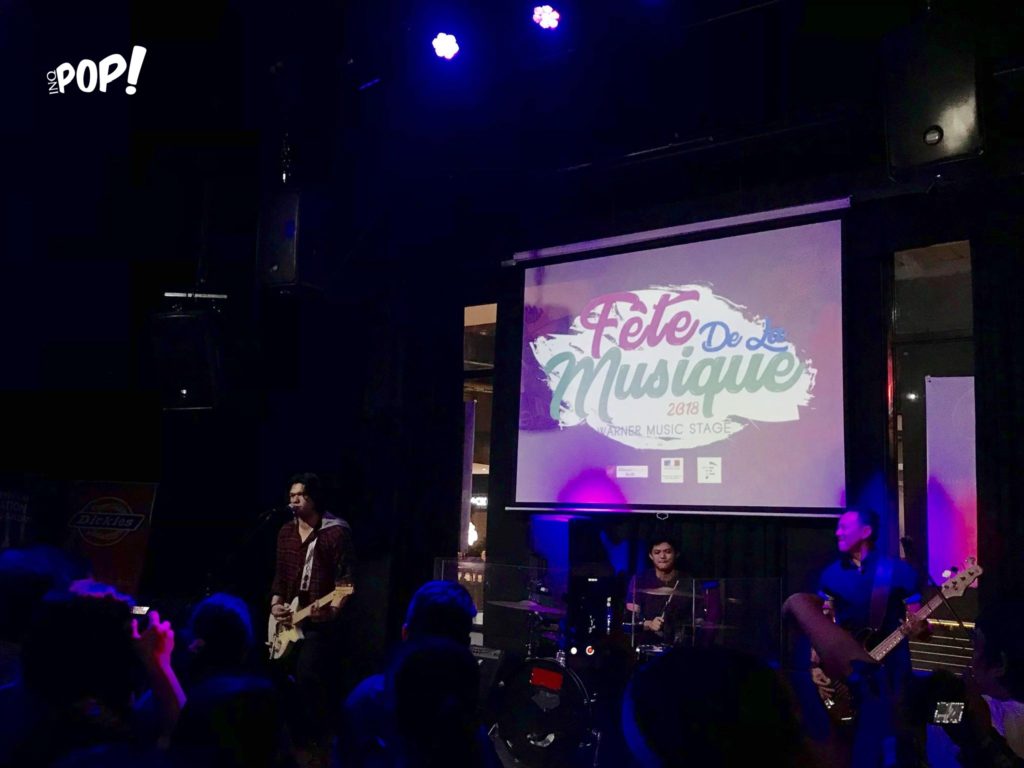 The first thing you notice before entering the Warner Stage at Social House, Circuit Makati is the gatekeeping bouncer’s curious way of going about the business of his profession. The bouncer checked IDs in an arbitrary fashion, perhaps functioning based on his own criteria in mind, such as how unassuming and underage one looks, or how short or tall they may be.

To the left, a girl in a flower crown undulates offbeat to the music; drinks are handed and passed around. But pity the asthmatics who lumbered all the way to the Warner Stage with initially uninflamed airways. Do not be fooled: It wasn’t the doing of a smoke machine for aesthetic purposes. Smoking cigarettes inside the air-conditioned bar just seemed to be the accepted if not inadvertently offensive mood.

At 7 p.m., alt-rock band HILERA took center stage and jolted the crowd back to consciousness. With frontman Chris Padilla on the guitar and vocals, HILERA indulged the revellers with their oeuvre, a part of which was “Rhyme Without Reason” from self-titled album “Hilera” that first hit the radio’s airwaves back in 2014. Bobby Padilla ruled the enigmatic domain of his drum set, while glaringly absent was bassist Buddy Zabala, momentarily substituted by Buwi Meneses of Parokya ni Edgar.

It’s apparent the rakistas in Warner Stage were serious and specific with what they craved for, and there appears to be no room for chit chat nor social niceties either. And if there was, there just isn’t any point in trying to speak louder in a rock gig. No pretences allowed, headbanging and thrashing only.

About 3 kilometers further is Poblacion, a gentrified neighborhood that doesn’t long for quiet. Or, perhaps, one that doesn’t have a choice to ask for quiet. It’s best to go on foot in this part of the metropolis, unless sitting in merciless traffic is your masochistic sensibility in life. The locals of Poblacion are kind enough to help and let you park in their driveways, but you have to shell out P100 for the parking space.

P100, though, is too small a price to pay for disturbing their peace. And yet, the order of things is seemingly kept balanced: the occasional vagrant and parking barker on the curb, as well as the small family sleeping on a cardboard sheet on the damp sidewalk unintentionally yet inescapably prove as a disturbance to comfort. Here you’re left with only two choices: Look away and walk straight ahead or choose to look down and really see. But you’re thinking now, “This is about music.” Except it isn’t entirely.

The Bedroom Beats stage in Agimat Foraging Bar left most of its goers in the gutter, quite literally. The line winding from the second floor of Agimat snaked down to the entire street of Fermina and beyond: the Bedroom Beats Stage was utterly a full house. Claustrophobia had never been so desirable, the condition perfect for those whose constant mood is intense skin-to-skin contact — all in the name of “musique”. Never mind that you’re uncertain if the person right next to you has tuberculosis or chicken pox or head lice. Not gross.

Getting inside Agimat seemed futile, unless one is willing to wait and stand in the humid nighttime air. The pulsating beat from above offered itself to its listeners down in the curb, like god sending rain to parched soil. It was a blind performance that nobody asked for, but everybody needed, leaving those below to nod their heads to the beat and make casual (or intimate) conversation.

One other thing: everybody looked pretty much a tambay out there littered in the street. Except, nobody actually got arrested as a tambay. That alone was a serious thing for reflection. Were the cops off duty or is Poblacion out of bounds? Either way, strange. 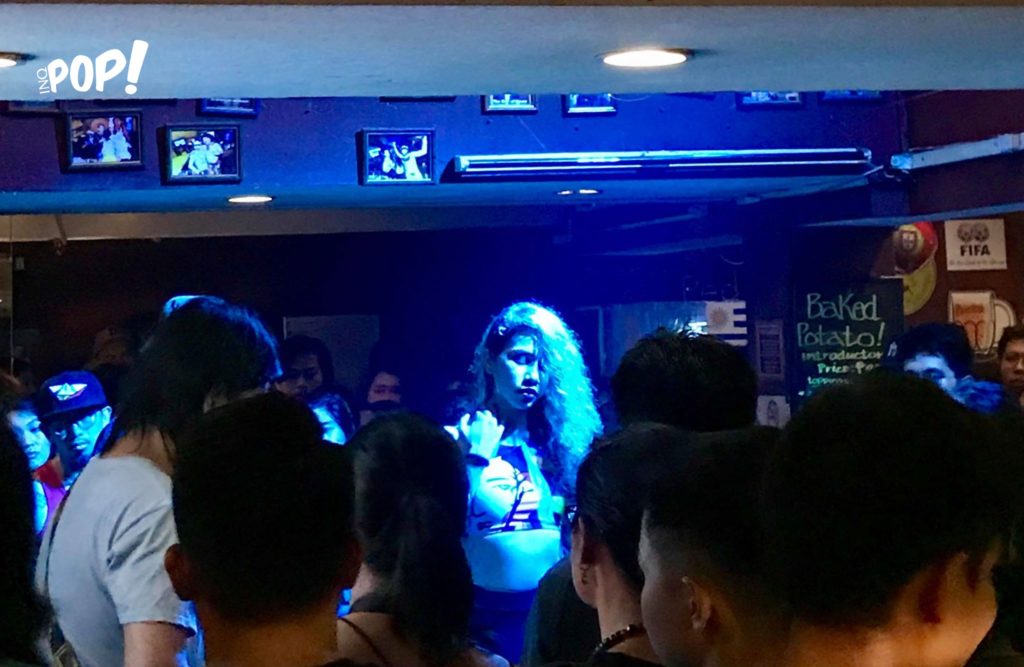 The Blues, Soul, Funk stage in H&J Sports Bar and Restaurant was overflowing with patrons too, but a crowd still manageable with some mild-to-moderate elbowing and nudging. Inside, Kosmikskala was on the cusp of their setlist’s end. Frontwoman and powerhouse singer Kristine Virtucio didn’t seem of this world at all, more like some mystic being of some other universe, her soulful voice beckoning anyone beyond the bar doors to come in and stay.

The crowd was sprightly and loud in their infectious energy, brewing a collective good mood in the tight space of the bar. Performing on stage with Virtucio was Paolo Manuel, drummer of The Jerks, who was dexterous in his capacity for rhythmic schemes, with Nitoy Adriano taking the guitar. For the unknowing, the underrated and silent Adriano, is considered as one of the most inimitable lead guitarists the country has ever seen in the past four decades, one who also happens to be the founding member of The Jerks, the first ever punk rock band in the country that came to light in ’79

Komikskala has only been around for just four years, but it’s clear to see that the people behind the group are seasoned and hardened familiars of the industry. This kind of weight by itself needs no explanation nor definition, only leaving the listener humbled and with deep reverence to have witnessed such a staggering performance in one room, at that moment, to the exclusion of all else. 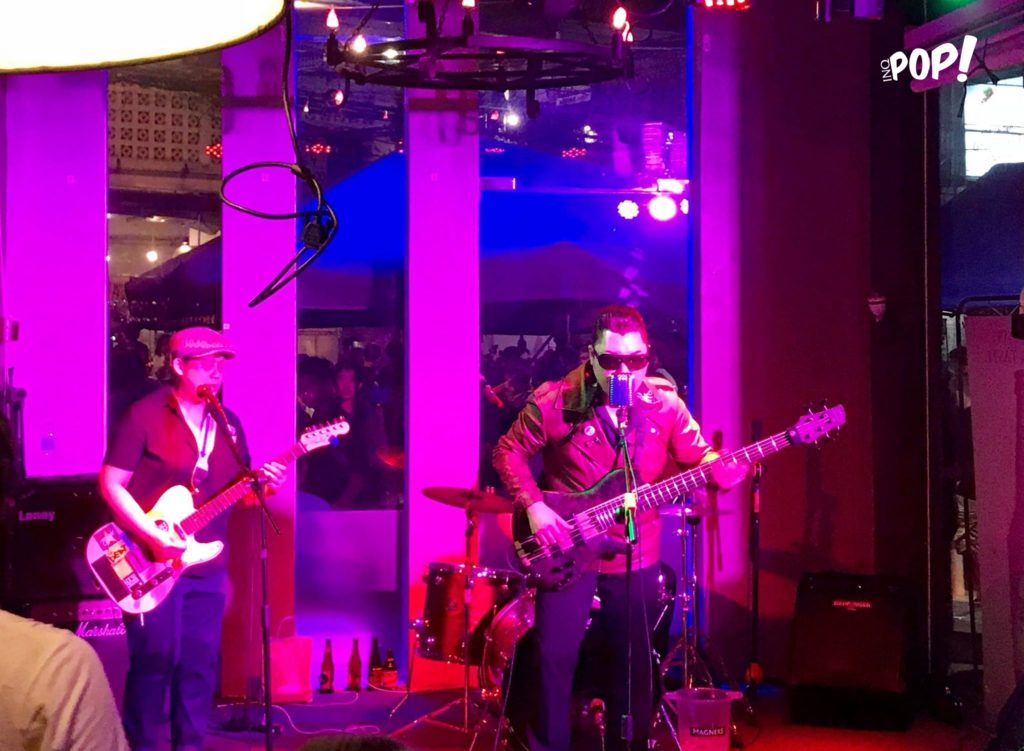 A little ways past H&J Bar and Restaurant is Alchemy Bistro Bar where the Ska stage gave dance aerobics a run for its money by kicking it old skool with their two-tone, quick-tempoed jerky and perky performance. Did anybody say running man? It was almost a shame nobody came in a dapper black suit, suspenders and a fedora to skank the night away, but this was forgiven all too soon with the blatant eagerness of the crowd.

One simply cannot be two dimensional and expect the band to fit a certain box; as far as dividing lines are concerned, they are pretty much blurred. The 3-piece Mobster Manila, consisting of Mob Allan — the bassist and vocalist with the gelled hair, clad in a heavy leather jacket and retro sunglasses — along with Briggs Baritugo (guitar) and Aj Ascona (drums), pelted their audience with song after song, giving them a salad of New Wave-influenced originals, laced with mod, punk and just a hint of Elvis Presley.

It was good and unadulterated fun, and the lone foreigner at the very front of the audience doing a half-skank can attest to this if only he wasn’t so inebriated. From the bar at the back, an angry patron throws a middle finger to someone across the room before punching his fist to his palm. But as if by fate, Mobster Manila breaks into one of their songs, “Cheers!”, and in sweeping fashion whisked their audience to “party and rock all night.”

Alcohol By Volume (ABV) in Jupiter street seemed so far from the claustrophobic Poblacion crowd when ventured by foot. But at 11 p.m., the speakeasy was already crowded, with jazz goers waiting in the coverup Lazy Bastard as the last performers of the night set up their wares inside.

But if you think it’s that easy to be let in at the front door, you’re quite mistaken, as a woman guarding the entrance doors of ABV held up a hand to every person who dared enter, only to ask, “Do you have a reservation?”

Do we have a reservation?  Of course not! Does anybody? Upon being made aware there weren’t any tables left inside the dim and already-too-cramped a space, avid jazz enthusiasts were told to stay outside, while the horror over the uncertainty of whether being allowed inside or not for the last of the jazz lineup befell each one.

But it all seemed to be just the exaggerated theatrics of paranoiacs, as patrons were eventually let in. The absence of chairs wasn’t so much an issue, as the crowd already swarmed around the small corner of space where the musicians were supposed to perform and shamelessly blocked the view of the Patrons with Reserved Seats.

Jazz is a frenetic and fickle thing. There’s no question that a history that spans about two hundred years with manifold precursors, movements, and subgenres would, on one hand, elude paraphrase and summation and, on the other, attempt to wrestle with the unnameable and inexplicable, what is consciousness and the unconscious, instinct and reason.

Jazz keyboardist Henry Katindig, bassist Colby de la Calzada and drummer (and owner of ABV) Patrick Cuartero began their set that night with no warning, as if to throw everything in the ether with a “Well, here goes.” Here, the asymmetrical melodies and spastic and off-kilter arrangements, coupled with the rising and falling tones of the keyboard and bass backed only by the guiding tempo of the drums furcate into provocative and hard-to-classify moods. 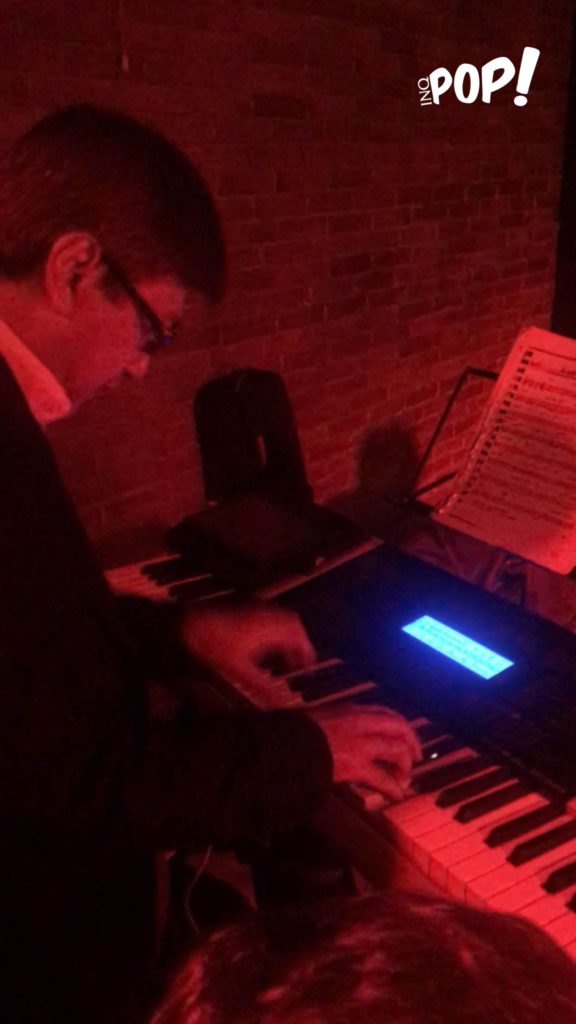 There is much pleasure in experimentation, and much delight in the play of the soul in improvisation. When the poet Federico Garcia Lorca spoke of the duende, whose closest translation in the English language pertains to “soul”, he likened it to the impish daemon that climbs up in your body and tears its way out of your throat.

Caught in the pakikiramdaman — the intimate and nuanced glances, slight nods, and signaling eyebrows — of Katindig, Cuartero, and de la Calzada to each other, it’s palpable that it’s no longer a question of skill nor prowess, but soul. 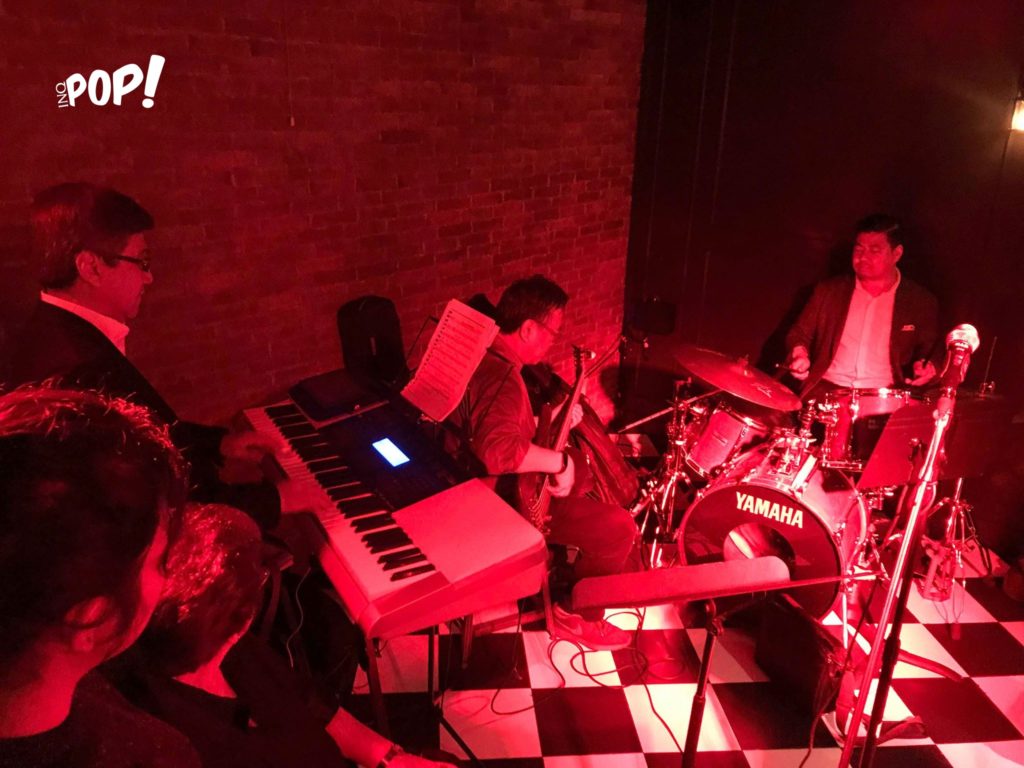 To render one truly alive with utterly unknown sensations, to mark the baptism of newly concocted things, to warrant music inexplicable to a thing purely felt in the gut, in the marrow of one’s bones — these things are most preternatural and staggering when fulfilled by the unlikeliest of suspects. In this case, in the names of Katindig, Cuartero and de la Calzada.

23rd Edition of Fête de la Musique in the Philippines