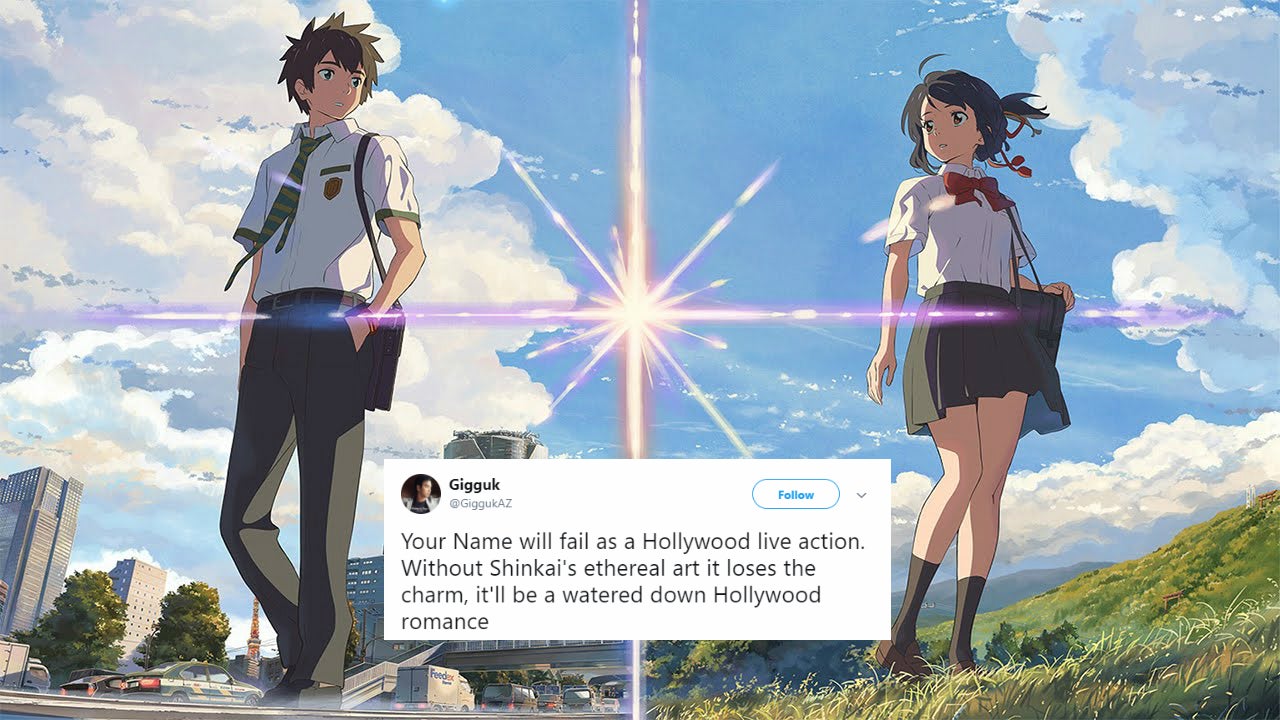 When news of a live action Hollywood adaptation of acclaimed animated film Kimi no Na wa (Your Name) hit the internet, many otakus were outraged by the idea. This was partly because of Hollywood’s reputation in remaking Asian titles—Ghost in the Shell and Death Note, for example—and turning them into something so far from the original.

Many anime fans openly expressed their disgust about it.

Your Name doesn't need an American film adaptation when it's still brand new. Just cuz it's popular doesn't mean it needs to be westernized 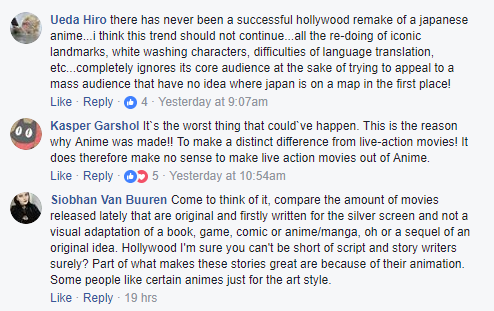 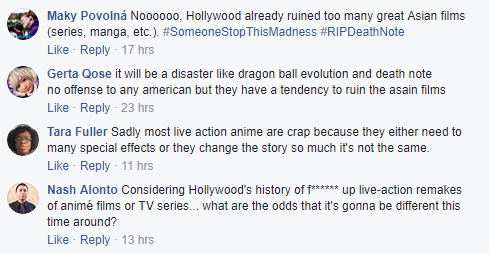 People pointed out that Kimi no Na wa is “extremely Japanese” and won’t translate well to english. 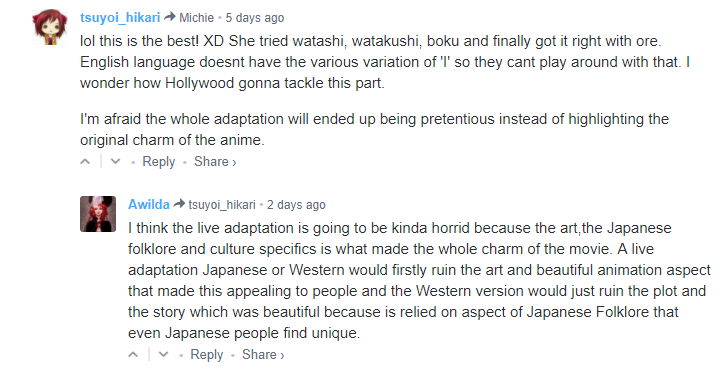 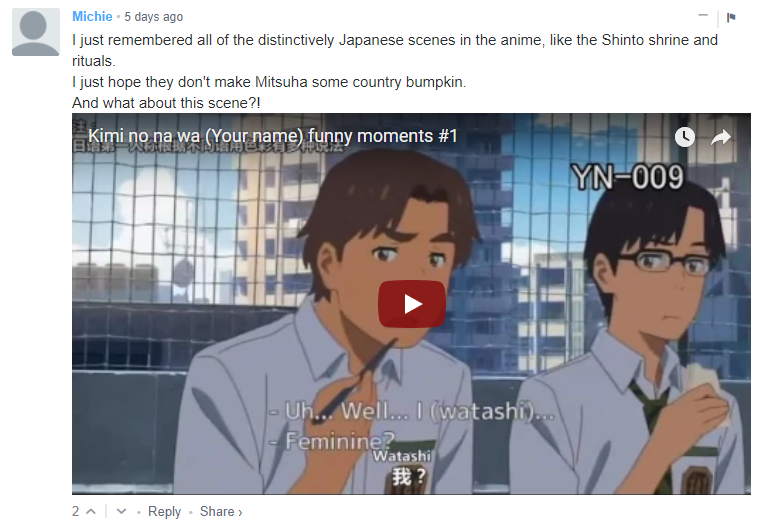 Some speculated how the Hollywood adaptation will turn out.

Your Name will fail as a Hollywood live action. Without Shinkai's ethereal art it loses the charm, it'll be a watered down Hollywood romance

JJ Abrams is making a live-action adaptation of the award-winning anime film Kimi No Na Wa (Your Name). I think I'm done with being alive?

Since "Your Name" is apparently getting a Hollywood remake, I nominate Idris Elba to play Taki and for Mitsuha let's also get Idris Elba.

I can't wait to see Emma Stone and Ansel Elgort to portray star-crossed lovers Matilda and Tony in JJ Abrams' Your Name.

Regardless of fans’ reactions, the adaptation already has the full approval and support of director Makoto Shinkai, who expressed his excitement about it:

your name. is a film created with the innate imaginations of a Japanese team and put together in a domestic medium. When such a work is imbued with Hollywood filmmaking, we may see new possibilities that we had been completely unaware of. I am looking forward to the live-action film with excited anticipation.

Even the producer, Genki Kawamura, is in favor of the film’s Hollywood adaptation:

Just like in the film it feels like a dream, Mr. Abrams and his team have captivated audiences in their masterful reinvention of known properties. And Mitsuha and Taki have found a perfect narrator, Mr. Heisserer, to tell their sci-fi infused love story, which gave the film such drive. The meetings so far have been creatively stimulating with fantastic ideas that no doubt will make for a great movie. I am greatly honored to work with these incredible creators in bringing to audiences the Hollywood live-action version of ‘Your Name.’

The film will be adapted by Paramount Pictures and J.J Abrams’ Bad Robot Productions in cooperation with original producer TOHO. Eric Heisserer, the screenwriter for the film Arrival and Final Destination 5, will be penning the script. 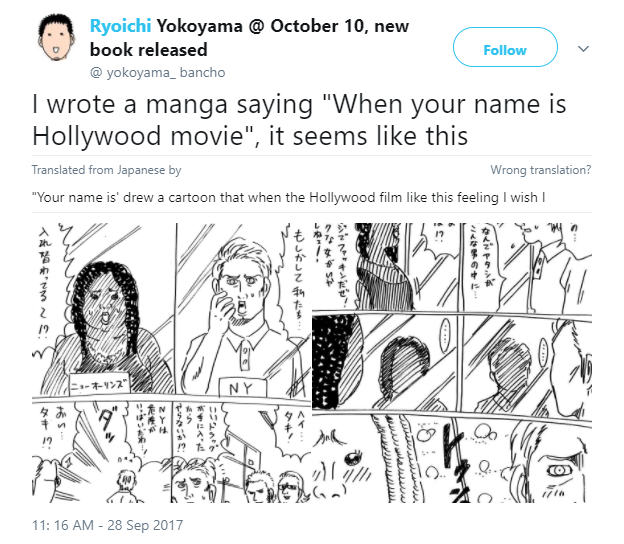 A Japanese manga artist decided to reimagine the Hollywood version on Twitter, and the result was hilarious:

It has been translated to English by another user:

people seem to be enjoying this thread so I quickly TL'd a manga by @yokoyama_bancho depicting japan's impression of hollywood's your name pic.twitter.com/9iljJFiica

aaaaaaaaand here's part 2 of the hollywood your name manga! pic.twitter.com/WUa4gArIs2

Let us know what you think via our comment section. 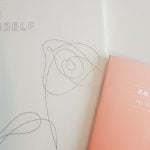 BTS fan found something “extra” in her ‘Love Yourself: Her’ album 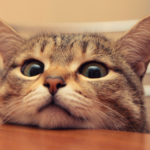