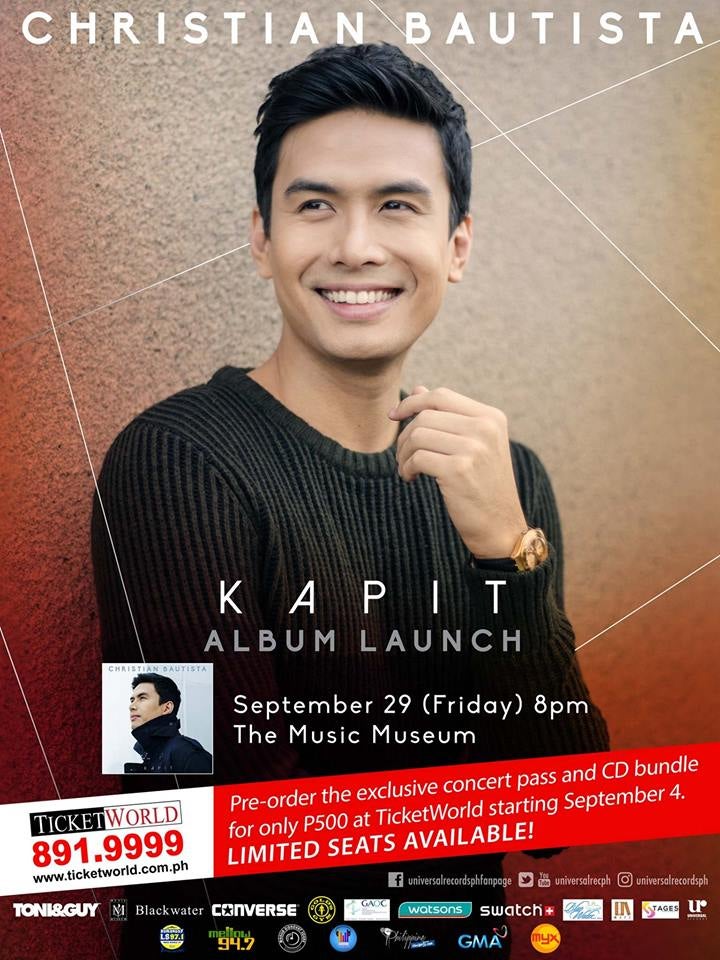 “This album is a journey to find my next music path, a challenge to write more songs and to continue writing songs for others,” revealed Asia’s Romantic Balladeer, Christian Bautista, as he was in the process of concocting yet another masterpiece.

This September 29, Christian Bautista is poised to unveil his 7th album under Universal Records entitled Kapit, duly named after his famed song. The Kapit album launch, happening at the Music Museum, will also serve as a concert treat for his listeners. For only PHP 500, fans can get their hands on Kapit while watching Christian Bautista and renowned performers like The CompanY, plus other surprise guests, live!

The single, Kapit’s success, bolstered by constant radio airplays and a spot as Koreanovela Innocent Defendant’s theme song, led Stages and Universal Records to produce the event for the OPM icon’s latest album. “[Kapit is] a song about holding on despite the many hardships of any relationship,” shares Asia’s Romantic Balladeer, Christian Bautista.

With numerous critically-acclaimed hits and several acting stints (including popular GMA-7 show, My Love From The Star), Christian has already made an indelible mark in the entertainment industry. The Kapit album, co-written and co-produced by Christian himself, features his duet with Encantadia star, Gabbi Garcia, for the hit TV program’s theme song, Maghihintay. Aside from his originals, the album also features Huling Harana, Christian’s “hugot”-filled single that embraces an acoustic ballad style; his duet track, Suddenly, with My Love From The Star co-actor, Jennylyn Mercado; Ikaw Lamang with The Voice’s Morissette Amon; and Two Forevers duet with international artist and American Idol runner-up, Jessica Sanchez.