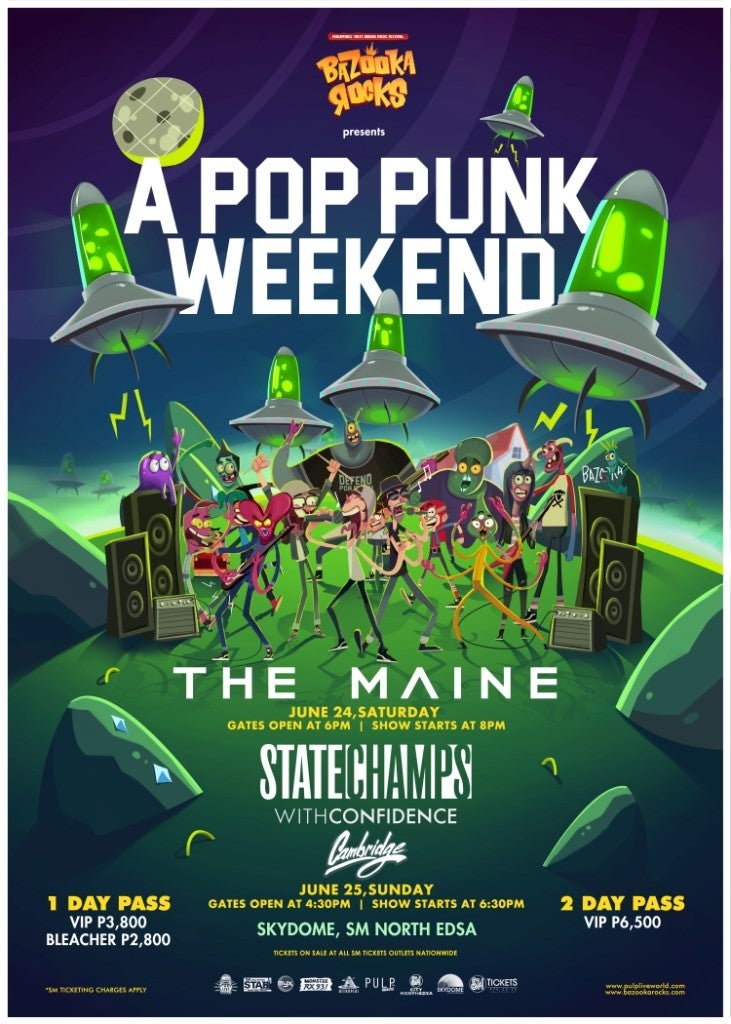 Nevermind the naysayers. They will all tell you that pop punk is a dead and defunct genre, but a lot of things will prove otherwise– just take a good look at the sheer number of prolific acts in the scene, and our ever-growing community of pop punk devotees. This June 24-25, 2017 at Skydome, SM North EDSA, we arm ourselves with our anthems and gear up to #DefendPopPunk as BAZOOKA ROCKS returns for a weekend of back-to-back pop punk shows presented by PULP Live World!

We’re setting out to proclaim pop punk world domination with old friends and new– our good folks from Arizona, THE MAINE are making their return to the Philippines in support of their brand new record; for Australian band WITH CONFIDENCE, it’s never too soon to come back and play for a bigger and wilder Philippine audience, and they’re also bringing along their fellow OZ rising act, CAMBRIDGE, from Sydney; and last but not the least, New York pop punk torchbearers STATE CHAMPS are finally hitting our shores for their debut Manila show, to the delight of long-time fans who’ve clamored for their presence. Both bands are ready to charge with us and champion our cause as we rally the unyielding pop punk community and wave our flags high at Skydome.

THE MAINE have spent the past several weeks working on their sixth studio album, Lovely, Little, Lonely, following up 2015’s American Candy, and will be bringing us new tunes this June. This year’s Bazooka Rocks V co-headliners are certainly not new to the immense energy of the Manila crowd, having performed in the Philippines several times already. They’ve done mall tours in 2011, headlined their own show at Skydome in support of their first independent release Pioneer, and rocked the first ever Bazooka Rocks Festival in 2012, brought the 8123 Tour to Manila in 2014, and was the support act of All Time Low at a sold-out show in 2015. John, Garrett, Jared, Pat, and Kennedy kicked off 2017 by mounting the 8123 Fest in Arizona in celebration of the band’s 10th year, and are now making their way back to us for the sixth time ever on June 24th. We celebrate 10 years of The Maine, a band that has remained as one of the scene’s steadfast mainstays.

Hailing from Albany, New York are STATE CHAMPS, a pop punk band of a new breed. Since they tore through the scene with the release of their first full-length album The Finer Things in 2013, the Pure Noise Records act enjoyed a steady momentum and is now at the forefront of a phenomenon dubbed as the pop punk revival. Two years after, they put out their second album, Around The World And Back, which peaked at #30 in the Billboard 200. Living up to its title, the sophomore effort featuring singles “Secrets”, “Losing Myself”, and “All You Are Is History” has set them up to conquer the world stage– UK, Australia, New Zealand, and North America. Now, they’re making their way to Manila for the first time ever to rock the Skydome on June 25th, satiating the strong demand of those who’ve been asking for a State Champs show over here for the longest time!

Joining State Champs for the second day of Bazooka Rocks V are the endearing and highly promising lads from the land down under, WITH CONFIDENCE, who will be coming with their fellow Sydney homeboys CAMBRIDGE. Swinging by just last year for a three-show Philippine tour powered by SM Malls and PULP Live World, With Confidence aren’t taking long in keeping the promise they made their smitten fans– that they’d be back. After breaking out in the States in 2016 during their run in the entire VANS Warped Tour in support of Better Weather, their debut album under Hopeless Records, the band has gone on to play in the UK, the Philippines, and then back home in Australia where they’ve played their anthems for massive crowds. Their long-time fans look on with pride as they take the world by storm one stage at a time, and Bazooka Rocks V will surely be another one for the books for the Oz up-andcomers, after they complete their UK/EU headlining tour in the first quarter of 2017.

Sydney-based pop punk band Cambridge will also join in on the fun, forming a tag team with With Confidence for an Australian takeover on the second day of Bazooka Rocks V, supporting State Champs. Formed in 2013, the four-piece band is slowly but surely rising in their local pop-punk scene. Although generally perceived as a “new” band, Cambridge have years of experience under their belt, having opened for Mayday Parade, Motion City Soundtrack, and others. Given our affinity for the catchiest of hooks and pop melodies, the “Catalina Wine Mixer” act is ready to blow us away.
Catch THE MAINE on June 24, 2017 (Saturday), and STATE CHAMPS with support acts WITH CONFIDENCE and CAMBRIDGE on June 25, 2017 (Sunday) at Skydome, SM North EDSA as BAZOOKA ROCKS V brings you a pop punk weekend like no other, proudly presented by PULP Live World. For Day 1, gates will open at 6PM and show starts at 8PM. For Day 2, gates will open at 4:30PM and show starts at 6:30PM. Tickets are priced as follows: Php 3,800 for a one-day VIP Pass (inclusive of a free PULP Magazine and Meet & Greet with the band), Php 2,800 for a regular one-day pass, and Php 6,500 for a VIP two-day pass inclusive of a free PULP Magazine, a VIP laminate, and Meet & Greet with the bands. Tickets now available at all SM Tickets outlets nationwide (ticketing charges apply) or call 470- 2222 or visit www.smtickets.com, or via direct purchase at the PULP HQ (without ticketing charges). For more information, visit www.pulpliveworld.com or call 727-4957

#BazookaRocksV
#BRFreturns
#DefendPopPunk
BAZOOKA ROCKS 2017
Bazooka Rocks V returns to bring you a pop punk weekend
the maine
INQPOP! Stories we think you might also like: