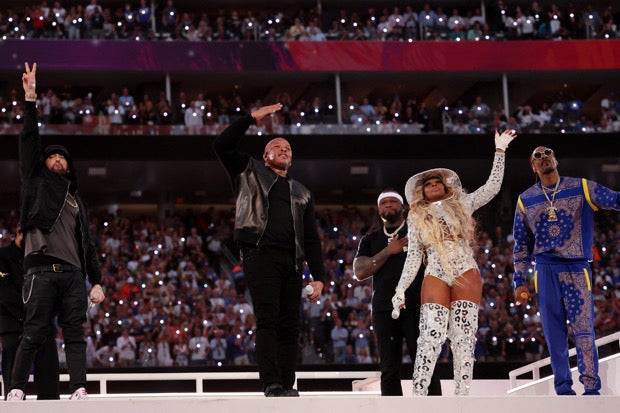 This year’s Super Bowl 56 was a blast from the past with a stunning performance of hit R&B songs and rap from legendary artists Dr. Dre, Snoop Dogg, Eminem, Mary J. Blige, and Kendrick Lamar.

Watch these five music titans get ready for the #PepsiHalftime Show on Feb 13th. https://t.co/Zgesis0IWB pic.twitter.com/KiUqUjYZxi

Artists Dr. Dre, Snoop Dogg, Eminem, Mary J. Blige, and Kendrick Lamar co-headlined the event and performed each of their hit songs in the 12-minute time frame. The stage setup of the halftime show went back to its traditional setup where fans could watch in the stands. Most of the stadium capacity limits that were placed in earlier stages of the COVID-19 pandemic had been lifted.

Dr. Dre is one of the world’s most successful and leading rap producers who has worked with artists like Snoop Dogg, Eminem, and Kendrick Lamar which may have explained why they are also part of the show. In the opening, Dr. Dre emerged from the set along with Snoop Dogg who performed their collaborated song “The Next Episode.” Both artists have had music collaborations and their appearance made it nostalgic and entertaining.

50 Cent, who was a surprise guest, also joined and sang “In Da Club” while hanging sit-up like his position from the music video. His performance was then followed by Mary J. Blige singing her famous hits “Family Affair” and “No More Drama,” giving everyone a major throwback bop. It then transitioned to Kendrick Lamar performing “M.A.A.D. City” and “Alright” alongside dancers grooving to the beat and moving to Eminem who performed his Academy Award winning hit, “Lose Yourself”.

Performing with him as backup was singer/rapper Anderson Paak playing on the drums with his band The Free Nationals. The performance proceeded to Dr. Dre at the piano who subtly played to the tune of “I Ain’t Mad At Cha” paying tribute to rapper Tupac Shakur. The ensemble of artists ended the performance by joining Dr. Dre on the same stage with a closing song of “Still D.R.E”.

Many anticipated the halftime show and reminisced about the performance of watching their iconic rapper and R&B singers.

I’m so excited about the #SuperBowlLVI halftime show. I feel like we’re about to witness history ❤️🤟

This is the most Iconic photo in Hip-Hop History #HalfTimeShow #SuperBowl pic.twitter.com/adLFiphUAu

Not 50 cent making an inverted appearance. A blast from the past!😁 #SuperBowl #SuperBowlLVI pic.twitter.com/xkRrJpUyEo

imma gonna tell my children these were the Avengers #SuperBowl pic.twitter.com/LvFCHnyrlv

Millennials and Gen Xers after that Halftime Show #SuperBowlLVI pic.twitter.com/7kN55s0Rxt

Everyone was overjoyed by the remarkable performances and throwback tracks of the artists. Among the five performers, legendary artist Blige was the only one who had previously performed during the Super Bowl. She was part of the 2001 show “The Kings of Rock and Pop” that featured Aerosmith, NSYNC, Britney Spears, and Nelly. 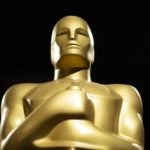 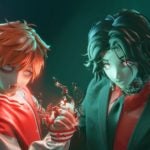