Zayn Malik is the latest artist to express outrage over the 2021 Grammy nominations, dropping an F-bomb in a heated tweet.

Five days before the awards show is due to air, Malik had a something to say about the integrity of the voting body. He claimed that you won’t be considered for a nomination unless you have the right connections. In his 11-year music career, Malik has never been nominated for the Grammys — neither as a solo act or as a member of One Direction.

Fuck the grammys and everyone associated. Unless you shake hands and send gifts, there’s no nomination considerations. Next year I’ll send you a basket of confectionary.

He joins other “snubbed” artists like The Weeknd and Halsey in the list of people who are disappointed with the 2021 Grammys. However, what sets him apart is that his latest album isn’t even eligible for the awards show this year.

‘Nobody is Listening’ was released months after the cut-off date at the end of September. This fact left a few of his fans wondering if he was aware of that.

Later in the day, Zayn Malik explained that his issue with the Grammys was not personal. He brought up how he noticed a lack of inclusion and transparency in the nomination process.

My tweet was not personal or about eligibility but was about the need for inclusion and the lack of transparency of the nomination process and the space that creates and allows favoritism, racism, and netwokring politics to influence the voting process

The music ceremony was recently criticized by ‘Blinding Lights’ singer, The Weeknd. He tweeted back in November, “You owe me, my fans and the industry transparency.”

Halsey also shared a lengthy statement on her Instagram after she was left with zero nominations as well. “While I am thrilled for my talented friends who were recognized this year, I am hoping for more transparency or reform,” said the pop artist. 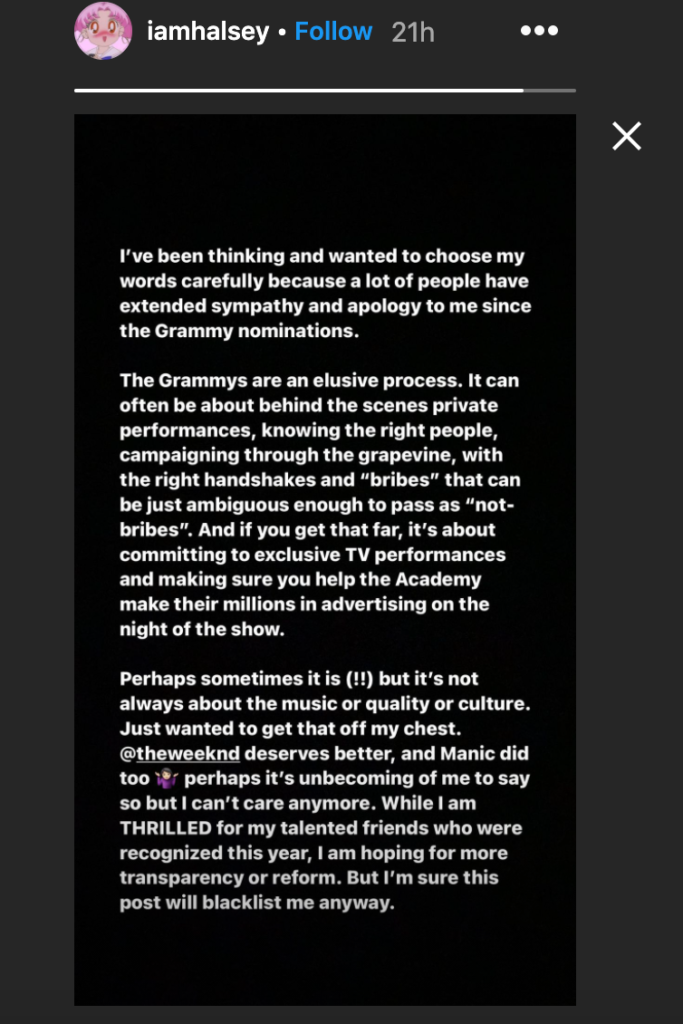 Halsey’s statement on the 2021 Grammys