Follow us:
This picture taken on May 25, 2020 shows Japanese photographer Koji Ishii taking pictures of a lost glove on a pole beside the road in Tokyo. - Ishii can't help himself: whenever he sees a lost glove on the streets of his hometown Tokyo, he just has to stop and document it. For more than 15 years, the 39-year-old has photographed and meticulously recorded details about thousands of lone gloves on the streets of the Japanese capital and beyond. (Photo by Kazuhiro NOGI / AFP)

Must be glove: The Japanese guy obsessed with lost gloves

Koji Ishii can’t help himself: whenever he sees a lost glove on the streets of his hometown Tokyo, he just has to stop and document it.

For more than 15 years, the 39-year-old has photographed and meticulously recorded details about thousands of lone gloves on the streets of the Japanese capital and beyond.

It’s a passion, but also, he says, something like a “curse.”

“I live with the constant fear that there might be a glove right around the corner. I can only describe it as a curse,” he told Agence France-Presse. 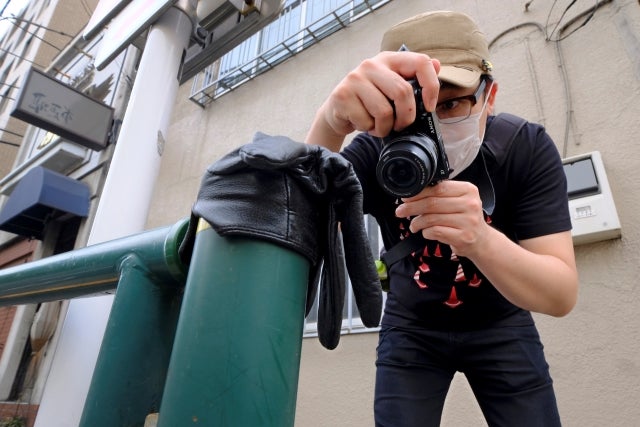 Japanese photographer Koji Ishii taking pictures of a lost glove on a pole beside the road in Tokyo. Image: AFP/Kazuhiro Nogi

He’s not alone. Around the world, a thriving subculture has popped up documenting lost gloves, with many social media accounts dedicated to them — such as Instagram’s Long Lost Gloves and Lost Glove Sightings.

Hollywood star Tom Hanks has delighted fans with his shots of lone accessories, recently even sharing an image of a sole hospital glove when announcing he’d contracted COVID-19.

However, Ishii is the elder statesmen of lost glove photography.

His obsession began back in 2004 when he saw a yellow workman’s glove dropped near his home and decided to take a photograph with his new flip-phone.

“I felt a shock like being struck by [lightning],” he said of the experience.

In the years since, he has photographed and recorded information about over 5,000 gloves — everything from children’s mittens to delicate lady’s lace numbers.

He finds them trampled on streets, stuck in drains, hanging off traffic cones or even washed up on the beach.

Ishii, who works at a restaurant, doesn’t touch the gloves. He simply photographs each one and records details about its location.

The appeal, he says, lies in imagining how the glove got there and who once wore it.

“I imagine people who were here, somebody who used it for work or some other person who was very kind and picked it up from the ground,” he said.

“They are no longer here but certainly they were weeks ago or months ago. This is what I enjoy.”

He has developed a sort of categorization matrix, determining first what kind of glove it is — a disposable medical glove? a children’s mitten? — then whether it is still where it was dropped or has been moved to a prominent spot by a kind bystander, and then describing the type of location.

On a recent expedition, he found a gray glove on the ground by a crosswalk.

“I’d say this is a light-duty/neglected/crossing type,” he said as he crouched down to take a good look.

Closer inspection revealed it to be a mesh fabric ladies’ glove, leading Ishii to extrapolate it was worn by a woman who removed it at the crossing to check her smartphone while she waited and didn’t notice she had dropped it.

The coronavirus pandemic has led to many people wearing gloves outdoors for safety — a bonanza for Ishii.

As Ishii moved to another location, he pointed at a leather glove on a roadside fence.

“This is a fashion-warm/picked-up/fence type I found last week,” he said.

When he saw it last week, he realized he had actually seen the same glove two months earlier — at that time tucked into a binding on a pole several meters away.

“Lone gloves are a constantly changing, dynamic phenomena,” he said, adding he often visits the same place multiple times to observe any changes, and once recorded the same glove in at least eight different but adjacent locations.

After three weeks, it finally disappeared.

“Then I realized that not recording the location of a glove that has now gone means that I have missed an important piece,” he said.

Since then he has returned to around 100 now-gloveless locations, often noticing changing scenery including demolished buildings or taller grass.

Ishii’s fascination means he sometimes finds himself getting off a bus before his stop because he has spotted a glove.

But the interruptions are often a chance to see a glimpse of kindness in a massive metropolis whose residents are sometimes regarded as cold or distant, he said.

“There are people who cannot simply pass by somebody’s tiny misfortune or tragedy, they cannot help picking it up,” Ishii said. “Even in Tokyo, even in this mega-city, we still have lots of such small acts of kindness.”

Ishii’s wife and daughter tolerate his obsession and sometimes share locations of gloves they have seen, but he is convinced there must be other like-minded people out there.

“There must be people around the world who have feelings for something that has parted with the other half,” he said. “I want to have a get-together with these people someday, I’d call it G7 or Glove Seven.” RGA