Last Thursday night, Pretty Huge Obstacles hosted a livestream event on Facebook titled “Overcoming Obstacles Together,” and the guest that shared their stories of setbacks and triumphs was no other than ONE World Champion Brandon “The Truth” Vera.

Up until this day, Vera holds the most number of wins and knockouts in the history of ONE Championship’s heavyweight division and, apart from keeping countless records under his belt, the mixed martial arts (MMA) champ is also running his own training center in the Philippines, which aims to grow the MMA sports in the country and to school the next generation of Filipino MMA fighters. 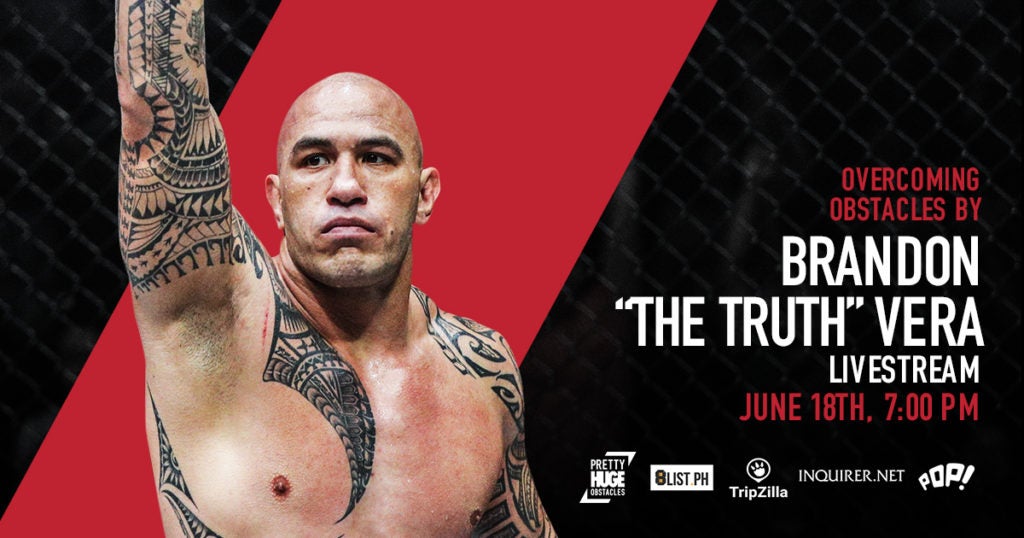 During the livestream event moderated by CNN Sports Anchor Charles Tiu, Vera was candid but all heart when he recalled some of the most important turning points that made a significant impact on his life.

Here are some of the best words of wisdom we’ve picked up from the zoom-powered interview that we’re definitely bookmarking forever:

1. Each day, learn to spend less time in purgatory.

It’s no secret that Vera was medically discharged from the U.S. army in 1999 after he suffered an arm injury. But what’s not known to people is how he dealt with the unexpected, life-changing hiccup.

To the then 22-year-old Vera, who was “on the peak of the highest mountain he’s ever been on”, “losing an arm” was like falling flat on your face in the blink of an eye, and then getting lost in purgatory without knowing if there’s a way to get back to normal at all.

But as each day passed, he realized that he couldn’t just sleep off his situation. He knew he had to do something, and he started by taking small steps forward.

If he’d been spending 24 hours a day in purgatory in his head, he decided to reduce the number to 20 hours and then find something else to do with the other 4 hours.

He also sought help from other people, and he never stopped searching for his light because there’s simply no magic that can fix his condition in a snap of a finger.

It was from this point that he gradually regained his balance and acquired a newfound love for working out and, eventually, submission grappling.

2. Accept when it’s your fault.

Dealing with losses from his MMA fights is a different story for the ONE Heavyweight World legend.

Like any other human being, Vera admits the stage of disbelief and denial can last really long for him. But once he’s accepted the fact that he lost, he then switches his gears to analyzing where he could’ve gone wrong during the fight.

For Vera, acknowledging your shortcomings is the most important part of the process because “that’s how you grow as a person.”

As for physical traumas left behind by tough injuries from intense fighting, the champ’s way out of one is to keep practicing until it eventually goes away.

This part is undeniably our favorite.

When asked for tips on how to overcome fears and worries, the MMA pro acknowledged that the mental side of things is always the hardest part.

But he went on to say that it’s important to understand that you need to want to help yourself from whatever slump you’re experiencing and to decide to move away from it because it can’t be good for you.

And that’s certainly a hack we want to live by because it helps us see things from a bigger and better perspective.

At a time when everything’s crumbling down and there seems to be no way to get back up, hearing stories and messages of hope can definitely do wonders for any of us.

Take it from the champ, don’t forget to take care of yourself during these uncertain times. It doesn’t matter how small the step you’re taking, what’s important is you’re dead set on taking it. 1% a day, remember. You can do it too, champ!

If you’re looking for ways to stay active at home, you can join online classes at the Pretty Huge Obstacles website. Here’s their official Facebook page where you can get more info: https://www.facebook.com/prettyhugeobstacles/.

Brandon "The Truth" Vera
One World Champ
Our favorite life hacks from ONE World Champ Brandon 'The Truth' Vera
INQPOP! Stories we think you might also like:

SM Cinema Drive-in opens in Mall of Asia for #SafeAndFunMovieWatching