As confirmed via her Twitter account, two-time GRAMMY winner Tori Kelly will hold her first-ever concert in the Philippines in support of her new album, Inspired By True Events. Concert promoters, MMI Live and Live Nation Asia, have also announced that the one-night-only concert will happen on April 20, 2020, at the New Frontier Theater.

Produced by Jimmy Napes (Sam Smith, Alicia Keys, Mary J. Blige), Inspired By True Events (Capitol/School Boy Records) marks a striking departure from the bright and breezy pop of Tori’s 2015 debut album, Unbreakable Smile. Like her 2018 passion project Hiding Place – winner of the 2019 Grammy Award for Best Gospel Album, with the hit single “Never Alone” named Best Gospel Performance/Song – Inspired By True Events keeps cantered on her warm yet powerful vocal presence and extraordinary range. But this time around, Tori brings even greater depth to her songwriting, examining events that recently shook her world – including her parents’ sudden separation, a tumultuous engagement that met with much disapproval and the death of her grandfather. 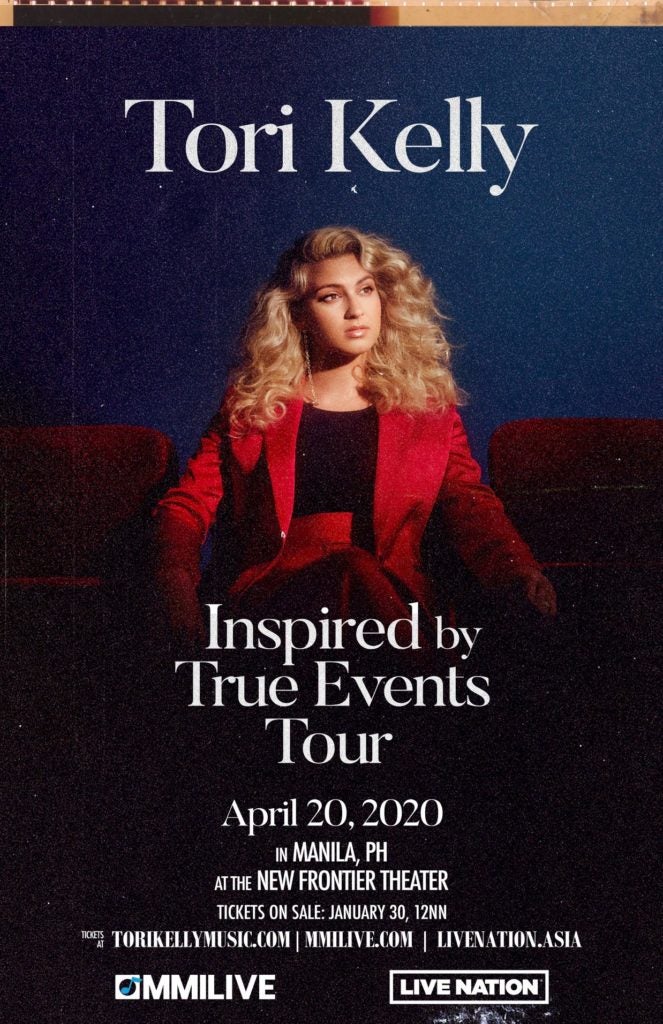 Finally, her Filipino fans will be blessed to witness our singer/songwriter perform new songs from the new album as she says, “Playing these songs live is a reminder that everyone goes through these sorts of things, and we all need to know that we’re not alone. If I were to put out an album that didn’t talk about these personal stories, I would just be faking it and hiding from the truth. It turns out that the uncomfortable place was the most honest and true. It was right where I needed to be, and from there I could tell my story.”

Reviews have been on the worldwide web as AP says that “Tori Kelly gets personal.” Rolling Stone also noted, ‘Change Your Mind’ is acoustic and unhurried. Swelling pianos and massed backing vocals serve to push the song towards a climax.” VIBE praised how the song “allows the musician’s soaring vocals and delicate story to permeate.” Idolator predicted, “[Inspired By True Events is] destined to be one of the best albums of 2019.”

Members of Kelly’s fan club will have access to presale on January 28 – 29, 2020 and the general public sale will be on Thursday, January 30, 2020 via ticketnet.com.ph and all Ticketnet outlets nationwide.

Catch the Tori Kelly: Inspired by True Events Tour in Manila on April 20, 2020 at the New Frontier Theater, presented by MMI Live.

For show tickets and information, you may visit mmilive.com and its social accounts.