The Australian bushfire crisis continues to devastate the country and its local wildlife. From the relocation of residents to the dwindling numbers of the animal population, this catastrophe has created unimaginable damage to Australia’s ecosystem–some of which may even be irreparable. And one of the biggest effects this wildfire has created is the suffering and loss of numerous animals. This includes some of Australia’s iconic creatures such as kangaroos and koalas.

Given this, some international celebrities and Filipino personalities have extended their support for Australia. Among this group of individuals helping the bushfire crisis is the Irwin family–which is comprised of Terri, Bindi, and Robert. According to INQUIRER.net’s news report, the Irwins continue to accept wounded animals into their wildlife hospital. But while Terri, Bindi, and Robert are here on earth caring for these creatures, it seems like their late father Steve Irwin has taken on a new role in heaven, comforting and welcoming the animals that fell victim to the fire.

Feel free to share this but please give credit to my page!So… it’s sad to say that I’ve spent about 3 weeks or so on…

In this Facebook post from Sketchy Koala, she reimagines Steve Irwin in the afterlife approaching these fallen creatures with open arms.

“I hope all the animals who couldn’t make it are now in heaven with Steve Irwin, being taken care of, and not having a care in the world or memory of how they got there,” the artist wrote.

Since it has been posted on social media, it has received numerous engagements from online users. In fact, as of this writing, it has garnered around 17,000 reactions, over 3,000 comments, and 31,000 shares.

Bindi Irwin herself even commented on the post, thanking Sketchy Koala for her heartwarming drawing. 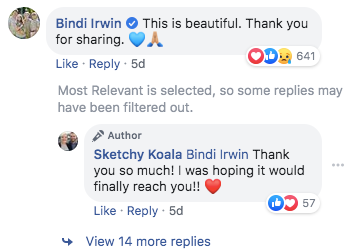 Steve Irwin’s legacy continues to live on through the work and efforts of his family. And this work of art, indeed, reflects everything the former “crocodile hunter” stood for.