South Korea’s Best-Selling Female Solo Artist, Certified Hit Chart-Topper, and Best Actress IU is set to bless the Philippines with the best day as she embarks on a solo concert tour that’s headed our way!

Filipino Uaenas, the time has finally come for us to meet the Nation’s Sweetheart! On a night full of enchantment and love presented by PULP Live World, prepare to catch IU at the 2019 IU TOUR CONCERT <LOVE, POEM> IN MANILA. The show takes place on December 13, 2019, Friday, 7 PM at the Araneta Coliseum. 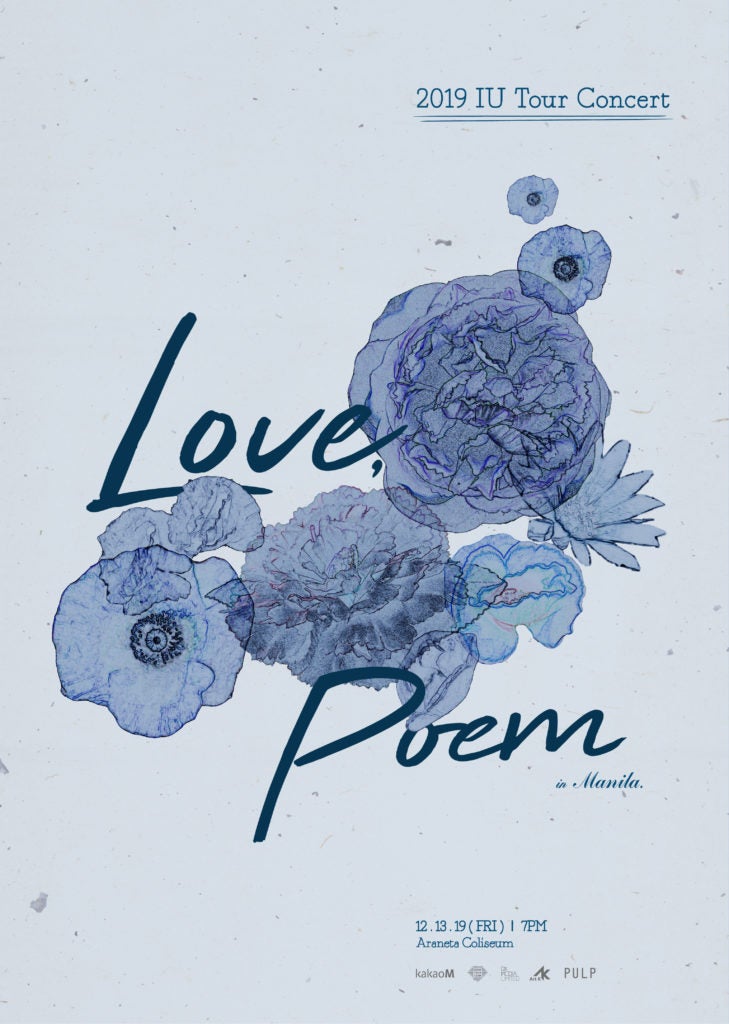 After debuting in 2008 at the age of 15, IU has definitely gained overflowing experiences from her first- ever musical stint to deserve the popularity she is enjoying now. As many know by now, her career has not been an overnight success. She debuted with her first album Lost and Found, and although it was liked by her fans, it was not until the release of her follow-up albums Growing Up and IU…IM that she gained mainstream popularity. From then on, crowds have been increasingly drawn to her. Her following song “Marshmallow” was a smashing track in South Korea immediately after its release. Soon after, it was through the song “Good Day” that she achieved stardom. From then on, IU has soared high and retained her dominance on music charts with certified chart all-kill tracks.

Throughout her 11-year career, IU has successfully released four studio albums and nine EPs, three of which having been number-one albums. Her catalogue also includes 20 number-one singles or chart- toppers on the Gaon Music Charts. IU has also been known for writing and producing her own songs and is also considered a musical genius by most of her fans. Her three latest albums (all of which were self- written) ⁠—A Flower Bookmark (2014), Chat-Shire (2015), and Palette (2017)—depicted a more mature vibe as she intentionally deviates from the typical K-Pop style of music.

Aside from her music career, IU has also taken the spotlight in hosting, radio, film, and TV dramas. She starred in various Korean Drama series such as Dream High, My Mister, Scarlet Heart Ryeo, and the recently concluded TvN’s highest-rated drama Hotel Del Luna. She has also been given the Top Excellence Awardee at the 2018 APAN Star Awards for her exceptional portrayal for her role in My Mister.

IU is definitely a force to be reckoned with. Since her debut, IU gained over 190 nominations and won approximately 70 of them. These include five Daesang, the Grand Prize Award from various awards shows, while at the same time consistently topping all music charts. With this immense recognition, she has been recognized by Billboard as the all-time leader of its Korea K-Pop Hot 100 chart with the most number-one songs. This year, she is set to earn greater recognition from both fans and award-giving bodies as she prepares to release a comeback mini-album titled Love, Poem.

Returning to the grand stage with her new concert tour, IU hopes to take her fans to a magical celebration of her career, at the same time, create a new chapter that marks her 11th anniversary as an artist.

This December, profess your love for IU as she heads to the Philippines to finally meet and serenade her beloved Filipino Uaenas. This is a show that you have all been dreaming of, so be present as we all witness the grandeur of IU. 2019 IU TOUR CONCERT <LOVE, POEM> IN MANILA happens on December 13, 2019, Friday, 7 PM at the Araneta Coliseum.

Tickets will be on sale soon at TicketNet outlets nationwide and online via www.ticketnet.com.ph. Further ticketing and show details will be announced soon. Please stay tuned on our social media accounts, PULP Live World on Facebook, Twitter, and Instagram and visit our website www.pulp.ph.