Follow us:
Stella the dog talks to its owner, Christina Hunger through an improvised soundboard. Image: Instagram/@hunger4words

Stella the dog can say when it wants to play ball, go outside or take a nap. All of this is possible thanks to Stella’s owner, Christina Hunger, who also happens to be a speech therapist.

The speech-language pathologist (SLP) from San Diego, California created a device that allows her pet Stella to communicate its thoughts and feelings with the use of a custom soundboard, People reported last Monday, Nov. 4. 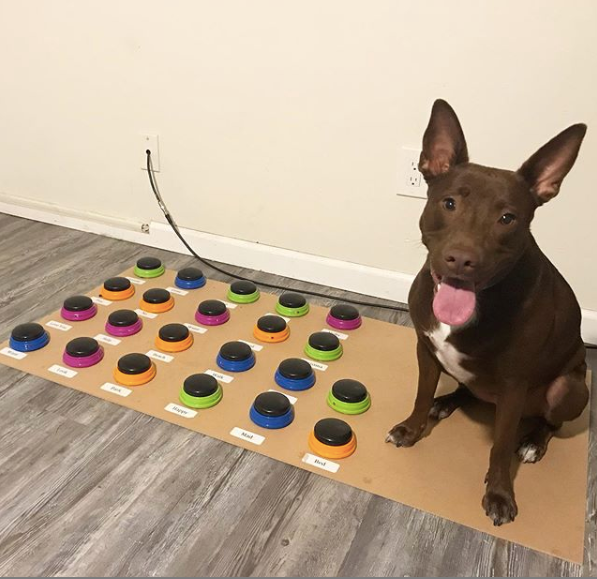 Stella the dog talks to its owner, Christina Hunger, through an improvised soundboard. Image: Instagram/@hunger4words

Stella is an 18-month-old mix breed of Catahoula and Blue Heeler. When Stella wants to “talk,” she steps on the buttons corresponding to the word she wants to say.

“Inspired by my passion for Augmentative and Alternative Communication (AAC) and by my love of dogs, I’m using my speech-language expertise to show how much dogs can say when given the opportunity to learn,” Hunger wrote in her website Hunger for Words.

She began teaching Stella when the dog was about eight weeks old, the report stated.

Hunger usually documents Stella when it wants to talk. “Last night, right before this video was taken, I accidentally said ‘ball’ on Stella’s device while I was actually reaching for a different word,” she said on Instagram, Oct. 30.

“Stella took this very seriously,” she added, “She picked up her ball, dropped it on her device, and said ‘good’.” Hunger translated this “good” to mean “good idea.”

After the interaction, Hunger took a video of Stella stepping on the buttons for “happy,” “ball,” “want,” “outside.”

The smart dog wanted to play outside, which Hunger answered with, “[a]lright, we can go outside and play with your ball.”

Last night, right before this video was taken, I accidentally said “ball” on Stella’s device while I was actually reaching for a different word. But, Stella took this very seriously! She picked up her ball, dropped it on her device, and said “Good” (Translation: Good idea, Mom!) • I started recording right after she said “Good” and caught the rest of her thought: “Happy ball want outside!” • Like all AAC users, Stella thrives when we talk to her using her device and say words that she loves. She never needs to know it was on accident! 😉 • • • • • #hunger4words #stellathetalkingdog #slpsofinstagram #speechtherapy #AAC #ashaigers #slp #corewords #SLPeeps #slp2be #aacawarenessmonth #earlyintervention #languagedevelopment #dogsofinstagram #dogmom #doglife #dogs #animalpsychology #doglover #dogvideos #sandiegodog #catahoula #blueheeler #smartdog #dogcommunication #mydogtalks #animalcommunication #interspeciescommunication #loveanimals

“I’m in constant amazement and shock,” Hunger said in the report. “Everyday she says something cooler than [what] she said the day before.” The language specialist claimed that Stella knows 29 words. The canine also supposedly knows how to combine these words to form a phrase or a sentence.

Puppy dies from ‘heart attack due to loud fireworks’