We can samgyeopsal all we want, but…

All-you-can-eat restaurants, such as buffets and samgyeopsal joints, have been all the rage in the Philippines. These are hard to pass up for many, its appeal in the sheer pleasure of eating as much as one desires, for a single price. Most samgyeopsal joints charge around the ballpark figure of P500 or less, an often too “sulit” choice for the gourmands who want to eat themselves into oblivion with no time limits.

Recently, an Inquirer contributor wrote about his choice to no longer patronize samgyeopsal joints. His account sparked a hail of responses online. The writer expressed concerns about the environment, citing reports about the ongoing agricultural crisis in the country, as well as the average food plate waste (62 grams) of Filipino households, wherein the majority (46 grams) comes from the energy food group, such as cereals and cereal products. The country’s place in the 2018 Global Food Security Index was also highlighted; the Philippines ranked 70th among 113 countries in terms of food security. 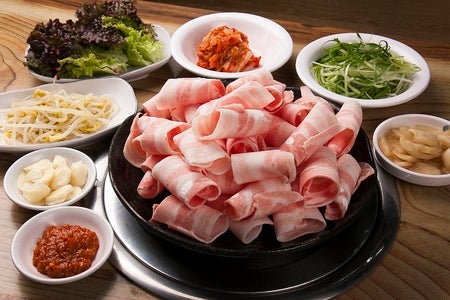 Food insecurity is tied with food wastage, as per the Department of Science and Technology-Food and Nutrition Research Institute (DOST-FNRI) in July 2018. DOST-FNRI science research specialist Cristina Malabad said then that food wastage in the Philippines reaches an average of 1,717 metric tons each day, the majority of which is from the energy food group.

The writer also mentioned the harmful effects of using charcoal, as well as the improper disposal of oil, which is produced from the grills in samgyeopsal joints. Furthermore, improperly disposed oil, such as that which is poured down the drain or sewerage, is environmentally disastrous.

Reactions were intense. A perusal of comments showed that the people’s sentiments were a mixed bag. There were those who were firm in defending their love of samgyeopsal, while there were those who acknowledged the negative effects on health and the environment.

“The article has its merits but why target/highlight just one establishment? How about the other buffet restos and eat all you can places? They have a wider selection of food offering thus have more impact on the ‘agricultural crisis.’ I support good causes but let’s also be fair and balanced when writing or expressing them,” said one Ferdie McSmiles de Villa. 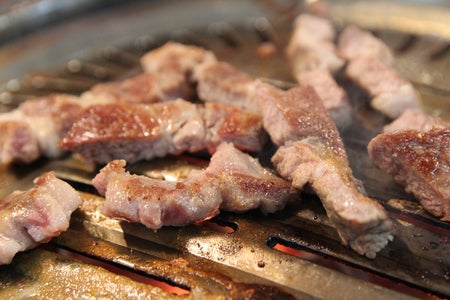 Another commenter, Fel Atienza, said that the worsening agricultural crisis in the country is not just caused by enjoying samgyeopsal joints, especially as the country still has a low per capita consumption of meat compared to developed countries.

“Worsening ‘agricultural crisis’ cannot be blamed on merely enjoying Samgyeopsal but rather the lack of effective government policies which could have properly addressed the food security and environmental concerns. For the writer’s reference, we still have low per capita consumption of meat as compared to other developed countries. And consuming more meat and veggies could help farmers’ livelihood because of higher demand. So let’s still enjoy it,” the comment read.

But Plotnek also said that the Philippines has one of the highest growing rates in meat consumption. The compound manual growth rate from 2011 to 2021 was predicted to be over 30 percent a year for pork, chicken and beef. 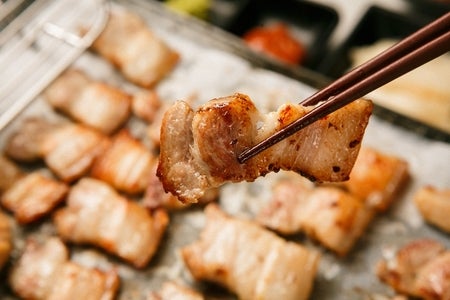 How about buffets and fast food, and their waste?

There were some netizens who also mentioned buffet and fast food restaurants, which they surmise may have more impact on environmental and agricultural issues.

The writer noted that normally, samgyeopsal establishments have proper grease or oil disposal procedures, but it would be environmentally disastrous if the oil is disposed of by pouring it down the drain or the sewerage. There was no mention of any samgyeopsal joint that commits the latter, although it seems to be not really a question of which, but whether these restaurants are, or willing to be, transparent with their waste disposal procedures.

Like what one Mike Peni who said that samgyeopsal joints are not the only estbalishments facing this problem, as he asked, “[H]ow about the local fast food chains where do you think the oil that was used to cook, chicken, french fries, burger patty, etc… goes to[?] Do they practice proper waste disposal as well?”

On the other hand, a certain Marty Gonzaga believes that the environmental crisis is a systemic issue and is not caused by one establishment. He commented that the most impactful way to save the earth is by holding accountable the companies who contribute to the majority of pollution and waste. 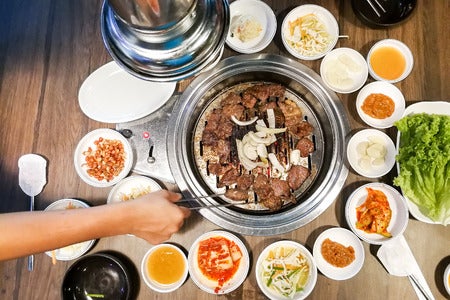 “While every individual should do their part, I think shifting attention away from the real villains is a dangerous social narrative. Avoiding Samgyup is like buying metal straws. It makes you feel good, but it doesn’t really do much. At worst, it makes you feel like you’ve already done your part while distracting the public about the bigger battles,” he said.

There were also those who attested that some samgyeopsal joints use gas and electric stoves and not charcoal, which supposedly emitted more carbon dioxide. One Zessa Zane Romo, for example, said that the place she eats at uses butane gas. Another, Reziel Joy Obreque, also said that other Korean barbecue restaurants use electric grills, which are placed in front of the diners.

Granted that these may be true for other Korean barbecue restaurants, the wildly popular Samgyupsalamat and Romantic Baboy, among others, still continue to use charcoal grills.

The two establishments, which have around 150,000 likes each on their Facebook pages, pride themselves for their charcoal grilling and continue to expand. Last July, Samgyupsalamat shared on Facebook that they have about 36 branches in Manila, while Romantic Baboy opened its 49th branch in Trinoma mall on Oct. 7, with three more on the way this month at The Fort Strip in Bonifacio Global City, CK Magic Mall in Urdaneta, and near the University of Santo Tomas in España. 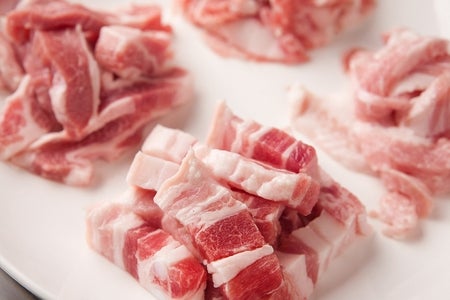 And how about the environment?

Curiously, a certain I.G. Mingo Mula asked, “How about the carbon footprint of animal agriculture and eating meat in the first place?”

It seems to be a crucial question. Chatham House’s 2014 report on this issue, titled “Livestock — Climate Change’s Forgotten Sector: Global Public Opinion on Meat and Dairy Consumption,” states that the “consumption of meat and dairy produce is a major driver of climate change.”

Greenhouse gas emissions from the livestock sector are also estimated to account for over 14.5% of the global total — more than direct emissions produced by the transport sector. Thus, dietary change, like reducing the consumption of meat and dairy, is a highly cost-effective mitigation strategy, the report said.

That kind of change though may seem to be distant in the minds of those who believe they cannot live without meat. Oftentimes, for many, there would not be any shift until the harm takes its toll on the body. Until then, we continue to feast. JB

We may eat more when we’re with family or friends, says study