Follow us:
A cat in Japan, outdoors. INQUIRER.net stock photo

Considered as Japan’s strongest typhoon in decades, Typhoon Hagibis tore through the country only to leave cities and towns devastated in its wake. As Japan is still reeling from the aftermath of the super typhoon, the whole world is now left anticipating how the country will recover.

Amid the concerns of people are of the safety of the cats of Japan, many of whom inhabit islands almost all to themselves. In true Japanese fashion, both the government and citizens appear to have not forgotten about their feline friends and included them in their preparations. 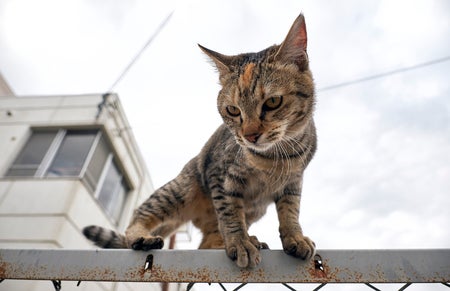 One Twitter user @TayAiren shared the good news, saying that the cats of one of Japan’s famous cat islands, Okishima, were taken to safety before the storm hit the island.

“They’re [safe], don’t [be] worried. The government (or people who work with idk) take care about them, They move them to the safety place before the storm for 2-3 days,” the netizen said on Twitter, Oct. 12.

They're safety, don't worried. The government(or people who work with idk) take care about them, They move them to the safety place before the storm for 2-3 days.

Another Twitter user @Latin_AMI meanwhile claimed she took some photos of cats chilling in the streets of Okishima on the afternoon of Oct. 13, just after the typhoon passed.

The good news came as a relief, especially as netizens even outside Japan have been airing their concerns for the felines’ safety prior to Typhoon Hagibis’ landfall.

Facebook Thai page @slavetomycat’s post on Oct. 11 expressing worry about the cats’ safety went viral, gaining over 26,000 reactions and 29,000 shares, as of writing.

Posted by เรียกฉันว่าทาสแมว on Friday, October 11, 2019

There are no official reports yet on the cats, as of writing. As rescue efforts are still ongoing and the citizens are still recovering, one thing to be thankful for in this unfortunate situation is that our Japanese feline friends appear to be safe. JB

PH sympathizes with Japan as it reels from ‘Hagibis’