In Buddhism, the devotees’ way of expressing gratitude to the deities is by leaving offerings at the temples. Usually, the objects set on the altar’s table are special flowers (particularly lotus blossoms), rice balls, candles, holy water, candles, and incense, among other things. But in today’s “boba tea era,” even the gods can now partake in the milk tea craze.

In Thailand, devotees give bubble tea as a holy offering at temple shrines, VICE reported. 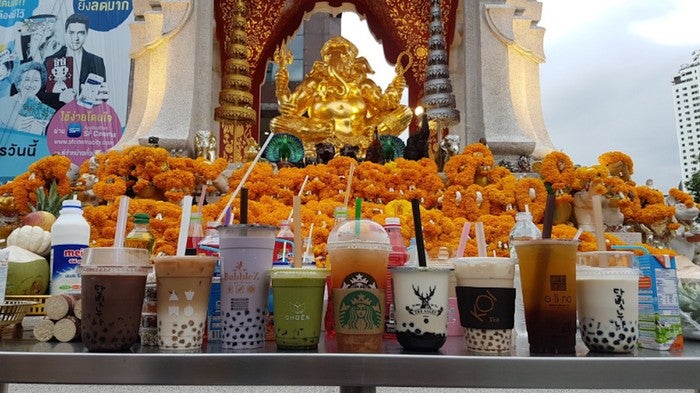 In the picture, which was posted by Twitter user Payunbud, a variety of bubble teas are placed before the deity’s idol—ranging from Taiwanese milk tea and fruit tea to the classic Starbucks cup. Apparently, worshippers can also offer other food items aside from milk teas. Funnily enough, red soda drinks and a bucket of fried chicken are also accepted as temple offerings.

As traditions pass into modern times, we may not always stick to the old ways. These days, the offerings have “upgraded” from the usual floral garlands to everyone’s favorite milk tea—even though the gods can’t really touch them.