Third time’s the charm for Glaswegian synth-pop trio Chvrches as the band returns for their biggest headline show ever in Manila happening on August 13 at the Smart Araneta Coliseum as part of their Love Is Dead 2019 Asia Tour.

Crafting songs with notable synths and edgy hooks, Chvrches combine their roots in Glasgow’s indie community – the group features former members of alternative rock bands with a love of chart-friendly pop. Lauren Mayberry, Iain Cook, and Martin Doherty made an immediate impact on the music scene in summer of 2013 with the bittersweet-yet-anthemic debut album The Bones of What You Believe, and later found ways of bringing an extra sheen to their music without sacrificing its depth.

Chvrches’ critically acclaimed third and latest album, Love Is Dead, just marked its first anniversary last May since its release, but it continues to break worldwide streaming records. The band reclaims the No. 1 spot on Billboard’s Top Rock Albums and Alternative Albums charts ruling both rankings for a second time. The trio scored their No. 1 on each tally, following the chart-topping debut of preceding album Every Open Eye, which also opened at No. 1 back in 2015. Tracks Get Out, Miracle, and Graffiti concurrently reign on the Hot Rock Songs chart, which blends streaming, radio airplay, and digital sales. Love Is Dead is Chvrches’ first album to feature outside production, with Greg Kurstin (hitmaker for Adele, Kelly Clarkson, P!nk, Sia, Foo Fighters) having produced a total of nine songs. When Chvrches began creating the record, they only had one definite plan. “We wanted to sound more like a live band,” recalls Iain Cook. “We’ve always felt like a rock band and all three of us have long histories in rock, so it was inevitable we’d eventually turn in that direction.” 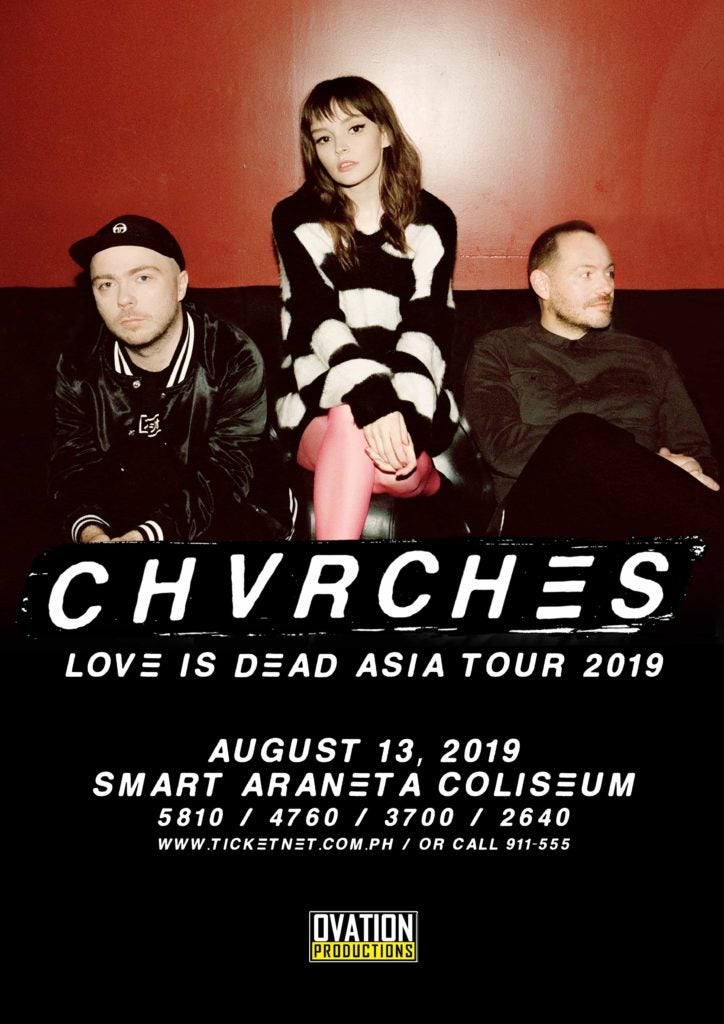 Over the past eight years, Chvrches has built a loyal fan base and landed on a handful of high-profile festival gigs with their catchy synth-pop tunes. However, the group just recently notched their biggest career milestone yet with their new Marshmello collaboration, Here With Me. The blockbuster single rose to the Top 40 of the Billboard Hot 100 chart, earning Chvrches their first ever entry to the Hot 100 list. It also debuted at No. 1 on the Dance/Electronic Digital Song Sales and has charted on Dance/Mix Show Airplay for three consecutive weeks.

Chvrches is more than thrilled to incorporate all their classic hits with brand new singles on this much-anticipated global tour. Indeed, the Scottish pop band is experienced at finding balance between fresh songs that are exciting to play and old favorites that the crowd demands for. Chvrches lead vocalist Lauren Mayberry says, “We go to enough shows ourselves and watch bands we like to what’s a good mix. You have to be aware that yes, it’s a creative process for you, but you’re there because people love those songs. Just give the people what they want.”

Other Chvrches hits include The Mother We Share, Gun, My Enemy, Never Say Die, Leave A Trace, Recover, among many others.