TVXQ! CONCERT – CIRCLE – #with in Manila

Over a decade of anticipation will soon be over as the Emperors of KPop, TVXQ!, make their way to Manila for a highly-demanded show! PULP Live World proudly unveils yet another legendary show that’s sure to make every PH Cassiopeia’s dream come true—TVXQ! CONCERT – CIRCLE – #with in Manila will happen on July 13, 2019 at the Mall of Asia Arena.

Indeed, the time has finally come for TVXQ! to grace the Philippines with their presence especially now during a fresh era of gleaming stages. Since their debut in 2003, the boy group has gained mainstream recognition, beginning with the release of their first single “Hug.” Soon after, we watched their career skyrocket internationally as their album “O”-Jun.Ban.Hap (2006) and Mirotic (2008) rose to fame, both hailed by the Golden Disk Awards as Albums of the Year. The latter contained the mega- hit title track “Mirotic,” which won number 1 trophies from all major TV music programs in South Korea. They were also recognized as the Artist of the Year for three consecutive years (2012 to 2014) at the Gaon Chart KPop Awards. They’ve also been regarded as the KPop act with the most number of top spot awards on music charts. 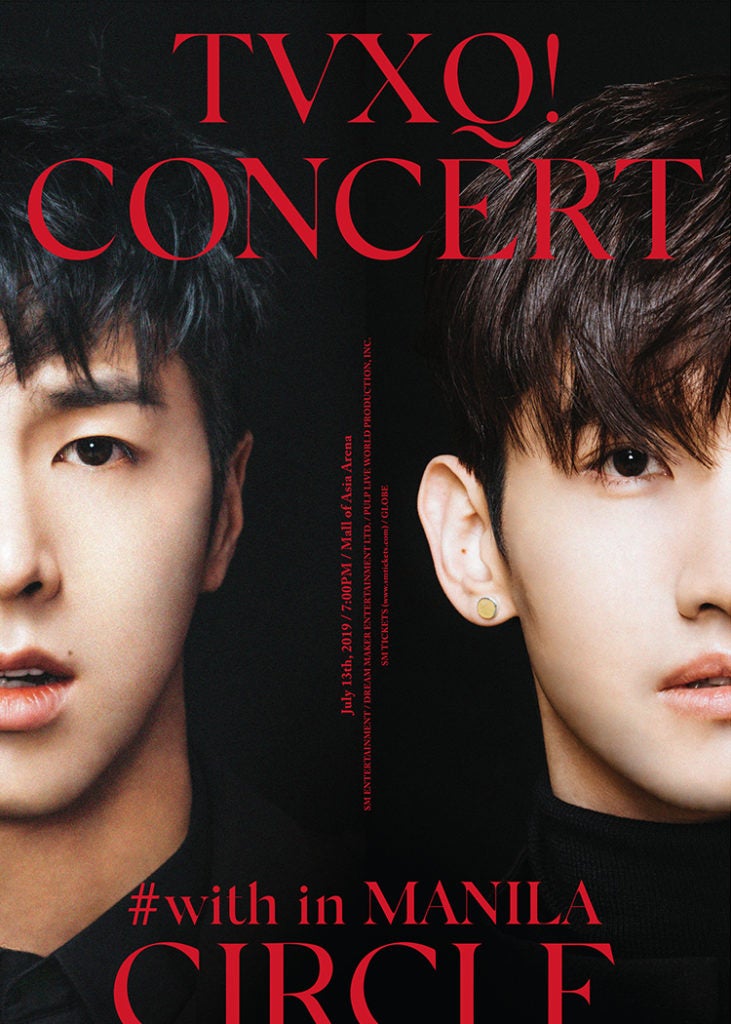 Continuing to push the boundaries of the industry, TVXQ! have also been regarded as the benchmarks of international success for being listed on the 2016 Guinness Book of World Records for having the largest official fan club membership in the world, with more than 800,000 Cassiopeia (fan club name) members.

TVXQ!, with members U-KNOW Yunho and MAX Changmin, have also been regarded as superiors for successfully thriving in the lucrative Japanese Market. With 15 years of experience under their belt, they still prove that they can possibly do more and achieve more than what they already have. Recently, they have been recognized for having the most no.1’s achieved on the chart by any foreign artists in Oricon history. Additionally, the group topped Japanese magazine Nikkei Entertainment’s annual list of “Concert Crowd-Pullers” for attracting the most concert-goers in Japan in 2018. Their Begin Again tour made them become the first ever foreign artist to bring one million people to a single tour in Japan, surpassing their 2013 Time tour record of having a total of 840,000 attendees.

Showing no signs of slowing down, TVXQ! continue to strengthen the fire they’ve started in the KPop industry. Just after completing their military service in South Korea, they released a new album in 2017, New Chapter 1: The Chance of Love, which carries the single “Love Line.” In 2018, to celebrate their 15th Anniversary, TVXQ! released the album New Chapter 2: The Truth of Love with the track “Truth.”

Although they have been on the spotlight since the late 00’s, TVXQ! are well aware of all the rising KPop artists especially in the line of boy groups. However, that doesn’t stop them from bringing fresh music to their ever active and supportive fan club. In an article written by billboard.com, the duo has mentioned that they will continue to strive hard to be wiser and mature as they aim to be a friendly and dependable group whom fans can call their home.

This July, brace yourselves as PH Cassiopeia paints Manila with a glowing sea of pearl red when TVXQ! visit the Philippines for their first ever solo tour in the country. Presented to you by S.M. Entertainment, Dream Maker Entertainment Limited and PULP Live World, TVXQ! CONCERT – CIRCLE – #with in Manila happens on July 13, 2019 at the Mall of Asia Arena. The show promptly starts at 7PM. Ticketing details will be released soon. Just follow PULP Live World on Facebook, Twitter and Instagram for updates and visit our website www.pulp.ph for more show information