Feeling woozy or having that sudden urge to throw up is commonly linked to hormonal imbalance, vertigo and/or migraine. But whatever the cause is, the sensation of dizziness—especially in the middle of your hectic schedule—can be really annoying or worse, debilitating.

However, for Buddhist Master Huiyen, barfing after performing a blessing ceremony at a temple in central Taiwan was not even associated with any type of illnesses. According to Taiwan News, during the purification ritual at the Longshan Shanjue Temple, the Buddhist monk walked the red carpet with a twist!

In the video, Huiyen can be seen twirling 150 times with a bottle of holy water in her hand. She continues doing her four-minute dance ritual while people keep on applauding her constant spinning. But when the monk is about to hit her four-minute mark, she suddenly slows down and even tries to hold on someone so she can stand up straight.

Unfortunately, after her futile attempts, she just starts puking all over the carpet. 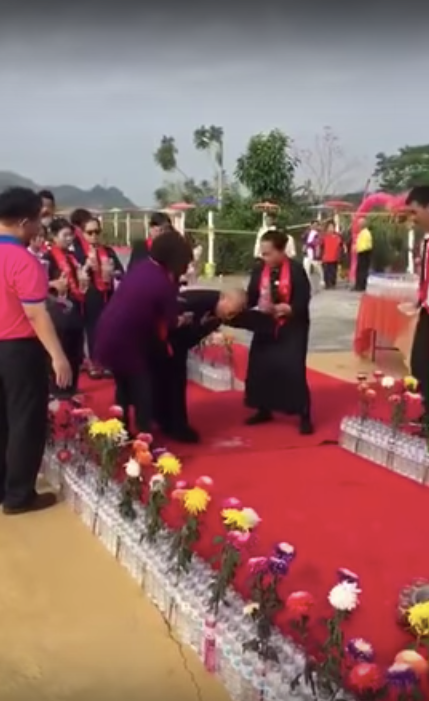 While most people are wondering whether the “spinning ritual” is a legit Buddhist practice, the monk said that it’s part of the Bodhisattva practices. Through “spinning open the center compass, the compass between the sky and the earth,” she was able to bless the economic growth of Taiwan.

When asked why she vomited, Huiyen shared that she hadn’t had enough sleep and exercise before the actual ceremony.